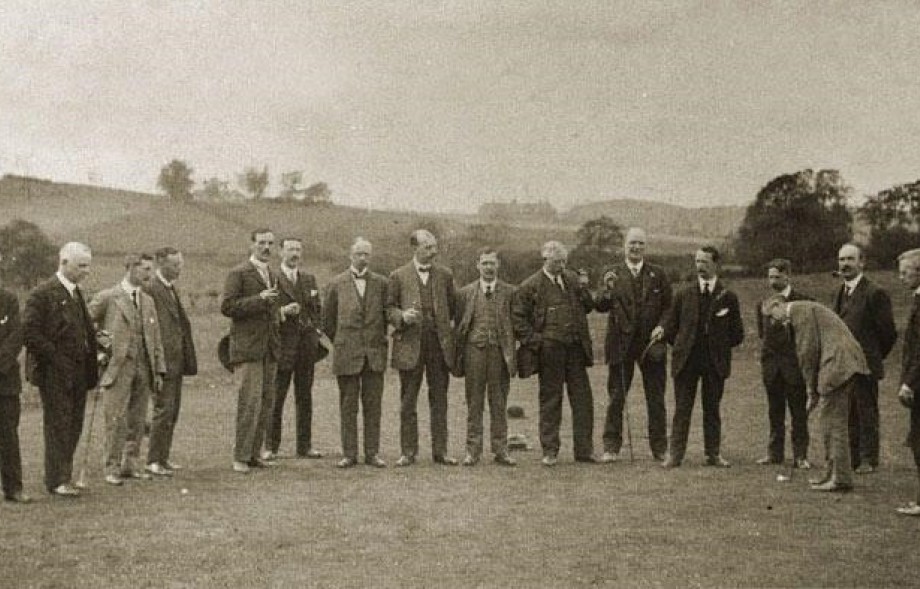 “Although the golf course at Giffnock over which the Eastwood Club plays has not yet been formally inaugurated, the course has been laid out, and already members are getting up their game to make a good appearance at the opening ceremony. The ground is five minutes walk from Giffnock railway station, and sufficient has been acquired in three fields on which to lay out an excellent nine-hole course.

The character of the ground may be said to be rough, but it is full of legitimate hazards. A burn is crossed thrice; there are two or three hedges; quarries are used, not in the direct line, but to trap foozled drives; and at the sixth hole, at which there is all the fun of a high loft, and a run up to see the fate of the ball. When all these things are taken into consideration, it will be seen that the course is very eventful, especially for an inland course.

The general fault of inland greens is their flatness and poverty of hazards. There are a great many neophytes in the club, and at first these hazards are a little troublesome, but this will wear off as their play gets better. The ground will give them an excellent training, with the view to successfully playing on the more enjoyable sea links. The club is in a very flourishing condition, and already a clubhouse, which will probably also be used as a recreation room for the village, which has nothing in that way, is talked of. There is no want of enterprise in the club, and it will probably take a good place among inland clubs. A professional is being looked out for to take charge of the green, and as the teaching will be large, a good man will probably be obtained. 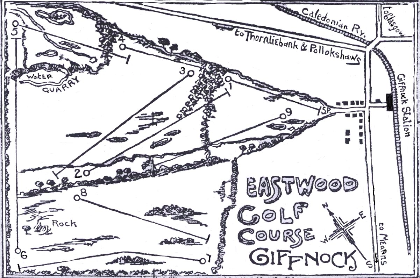 A short description of the course may be interesting. The first tee is at the village end of the first field. And the line to the hole is parallel with the right hand boundary wall for a distance of 219 yards. A straight drive and an iron shot will reach the green, but the heeled ball will probably go out of bounds over the wall, and the teed ball find its way down the sloping ground into a quarry filled with water. The gutty will be irrecoverable. The second hole has for hazards an old road closely followed by a hedge and rough ground beyond. There is, however, good turf within range of the driver. The hole is 250 yards in length, and consequently there is still a long creek or brassy approach left over the burn to the green in the second field. This is a good hole in five. The third hole re-crosses the burn, and has a good green at a point a little to the left of the second teeing ground. There is no great difficulty in the way, with the exception of a quarry well to the left which will only trap the very recklessly-played ball. The distance is 250 yards. The fourth hole is a short one – being only a little over 150 yards, the green may be reached with the driver. It is within the bounds of possibility to finish in one, but the score will usually be three or four. There is a quarry to the left of the green which may prove dangerous. The fifth hole requires playing, and is exceedingly interesting. The green is at the right hand bounds of the course. The tee shot must clear some dangerous hilly ground, and as there is only a small piece of turf for a good lie, the drive will have to be straight and accurate. The feeble driver will have to trust to luck for a good lie on he bad ground. More uncertain ground intervenes before the green is reached, but a full cleek shot should do the needful. The putting green is a beautifully cupped piece of turf. The sixth hole runs parallel with the outward bounds of the course, and although the teeing ground is placed well forward just now, the proper place for it gives a stretch of eventful country for 400 yards. The tee shot requires to steer clear of the edge of a quarry to the left, and another long carry will place the ball near the burn. There is much left to do with the approach, however. The burn, a short stretch of turf, a high rocky ridge, and a few yards of rocky ground have to be negotiated before the green, which is at an elevation behind the ridge in the third field, is reached. Many for safety will prefer to take the burn first, and play the bell short on to the turf, and then take the ridge and rocky ground with the fourth shot by an easy loft. The seventh hole goes in a homeward direction, and is 264 yards in length. The turf is good and firm, and there is no hazard with the exception of a wall to the right, as a warning not to heel the ball, straight and clean hitting will bring the golfer well home in two or three. The eighth is similar in character to the seventh hole, but a little shorter. The ninth hole goes home into the fort field. A hedge and an old road can be cleared with the drive, and a burn is the only other hazard.” (GH 29.3.1892)

“On Saturday afternoon the new course of the Eastwood Golf Club at Giffnock was formally opened. Through the kindness of Mr Mann, the captain of the club, an open day was given to members and friends, and a marquee was erected at the home hole for their reception. There was a very large turnout, and the bright sunshine which succeeded the heavy rain of the previous day not only helped to make the spectacle a brilliant one, but tempered the greens so as to make the conditions of playing the most advantageous. Like all other golf courses, Giffnock suffered from the recent drought and became inconveniently keen, but Friday’s copious rain altered that, and the new greens, which were played on for the first time, were in excellent condition. The course has already been described in these columns, but since that time it has vastly improved. The club secured James Douglas, a North Berwick professional, as greenkeeper, and he has laboured with a right royal will to get the course into proper golfing order. Whins and stones which formerly lay in the line of play have been carried away. In such a short time, this must have laid a lot of work on the greenkeeper, and he has done it well, The transformation is very apparent. But he has also given attention to the greens, and to have then in the fine condition of Saturday spoke of the endless rolling, watering and mowing. The greenkeeper. However, has good material to work on. The course is thoroughly sporting. The hazards are so well distributed that no two holes are alike, and they all require playing. Indeed, a beginner will find some almost insuperable. Unlike many inland courses, over which one might go with a putter or cleek, the Giffnock green calla into play the lofting irons. The holes that may be approached by running up are very few, and the golfer who has learned to play mashie approaches will have the best chance, as over-running the greens is fatal. The record of the gren, by James Douglas. is 41, but this will be reduced when the hazards are toned down a little by playing.

After Mrs Mann performed the opening ceremony by driving the ball off in true golfing style to loud applause, she was presented with a silver-mounted club. Then came the event of the day, a match between Ben Sayers (North Berwick) and David Anderson (St Andrews) against George Douglas (North Berwick) and James Douglas (the local professional). After a close and exciting match, the Douglas brothers eventually won by one hole.   (GH 16.5.1892)

The members were not satisfied with the course and in December 1892, many members resigned and amalgamated with Pollokshields golfers to form the Pollok Golf Club. The course was unused until 1893, when  it was leased by the Glasgow YMCA, and, following alteration and restoration, re-opened in 1894.