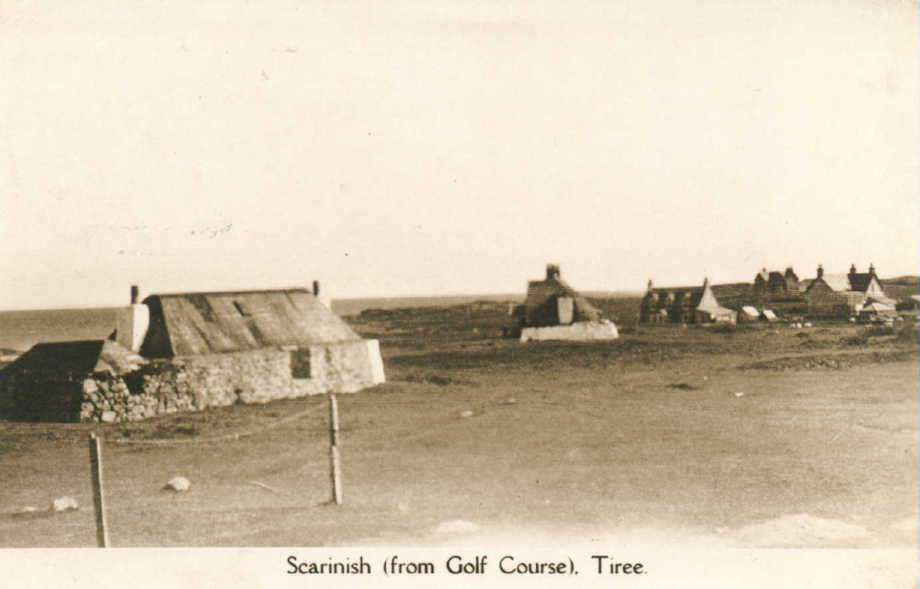 Scarnish Golf Course. “There is a 9-hole course at Scarnish for the use of hotel visitors. The hazards are bunkers and water.” (GA 1900)

"A golf course in Scarinish was set up in 1920 or 21 by the Heanish policeman, John Glenday and a visiting telegraph operator, David Murdoch. Johnny Brown from the Scarinish Hotel and Jack McEwan, who lived in Heanish, were also involved. The course had 7 holes.

"The first tee was straight across the road from where the bank is today, and then they went up to the lighthouse, and then along both beaches [one hole was on Eilean an Arbhair, the tiny mound at the shore that today carries an old telegraph pole, which would have made an interesting green!]. There were different holes and flags, and then they went over the back of what is now the Bank House and then right round till they stopped just below Slowther’s house. It went over both beaches and over the road, I know that. I don’t know if you remember the stream that used to run at the back of [The Willows]. They crossed there, and they always lost their golf balls there, and we went in with our bare feet and found them, after they were away of course. Not for them! Oh! No! We opened the balls, and some of them had elastic in them and others were made of] wood – they were no use. The ones with elastic were. You got a piece of elastic and two sticks and you had a catapult. We never gave them back, but sometimes we had to."  (AC66, Annie Kennedy, Scarinish.)

The first green keepers were Dugald and Neil MacKinnon (the uncles of Iain Johnstone in Heanish). Margaret MacKinnon’s brother took over in 1925 aged 13. He was paid £1 a week to cut three greens and scrape the sheep droppings off the rest. (Margaret MacKinnon, Braeside, 8/1995, personal communication).

Late in 1937, work started to upgrade the course to 18 holes, which became available in 1938. Membership hovered mostly around 25. 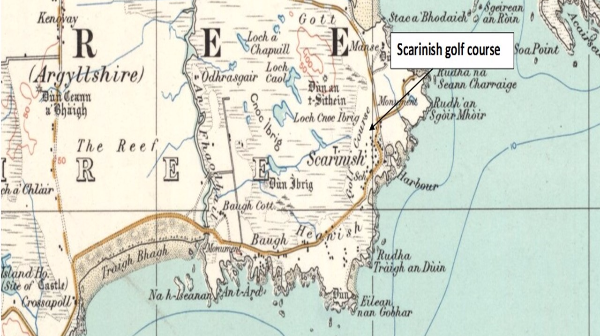