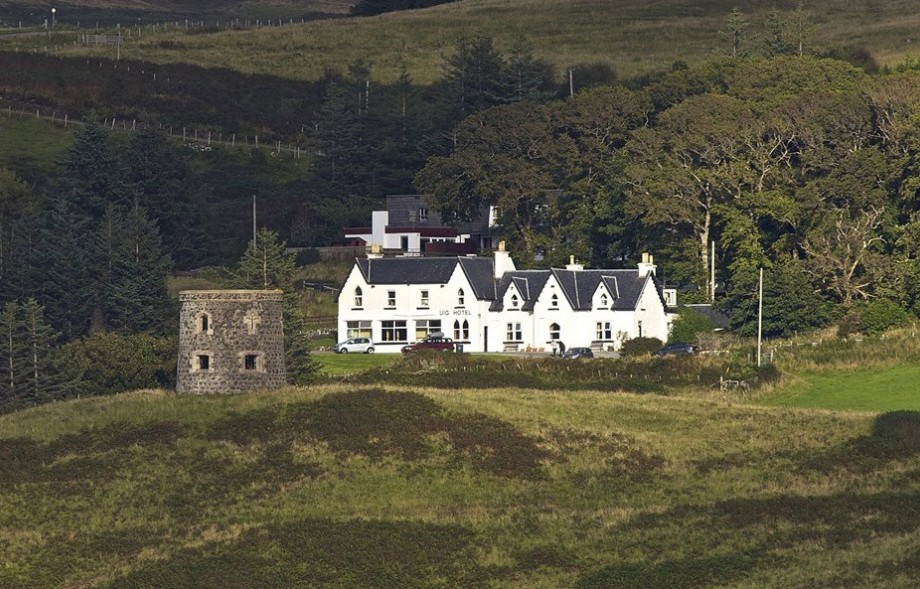 The course was on the high ground above the hotel.

Uig Golf Club.  Instituted 1897. A 9-hole course on the shore of Uig Bay, laid out and maintained by the Uig Hotel, whose guests have free access.

“The first general meeting of the recently constituted club was held in the Uig Hotel on Saturday last for the purpose of completing the election of office bearers and drawing up rules.Mr Mackenzie, the Captain, occupied the chair. Mr Barclay, secretary, intimated a letter from J.A.E.Ballie, of Dochfour, M.P., accepting the office of Hon. President of the club.

The following were also elected office bearers:- Hon. Vice President, R.M. Livingston Macdonald, of Floddigarry; President, D.A. Clow, Cridrach; Vice President, J. Urquhart, Uig Hotel; Captain, John Mackenzie, factor for Kilmuir; Vice Captain, J. McCaskill, Kilmuir estates office; Secretary, A. Barclay, M.A., Uig; Treasurer, Dr Wells, Uig. It was resolved to obtain a silver medal to be competed for monthly. It was reported that since the course was opened the game has been enthusiastically taken up by the inhabitants of the village.” (S 8.7.1897) 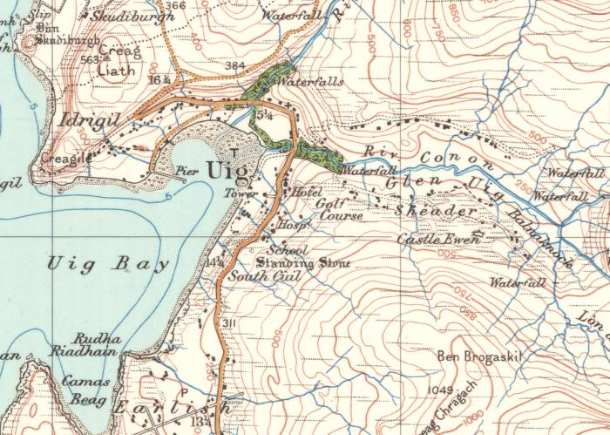 Golf course shown behind the hotel.

"The annual general meeting of this club took place in the Uig Hotel on Monday, 16th inst, when notwithstanding the stormy nature of the weather, there was a good attendance. The Captain ( Mr MacKenzie ) occupied the chair.The treasurer submitted a report, which stated that the number of members is between 30 and 40, and that the club financially is in a satisfactory condition.

“The members of the Uig golf club competed on 10th September for the silver cup presented annually by Mr Cowan of Conon Lodge, for competition by members of the Uig Golf Club. Mr Angus Grant, the Secretary, announced that the winner was Mr Andrew Stoddart, who was closely followed by Mr MacCallum, of the B.O.A.S.

Mr Cowan was himself present, and expressed his pleasure at seeing so many competing. He called on Miss Shine, one of the house party at Conon Lodge, to present the cup. Mr Stoddart thanked Mr Cowan for his beautiful and valuable gift, and assured him of his pride at being the winner of so great a prize. Mr Donald MacLeod, Headmaster, Kilmuir, spoke of Mr Cowan’s great generosity to every deserving case in Uig and to his liberality to the golf club.” (OT 28.9.1929)

Being own and run by the Uig Hotel, it is not surprising that no mention of the club aver appeared in any of the Golfing Journals.