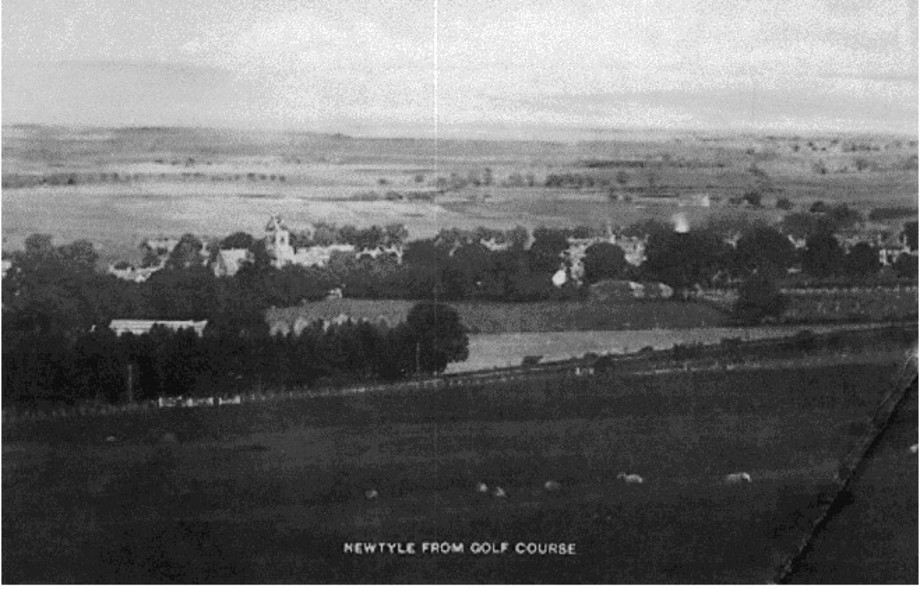 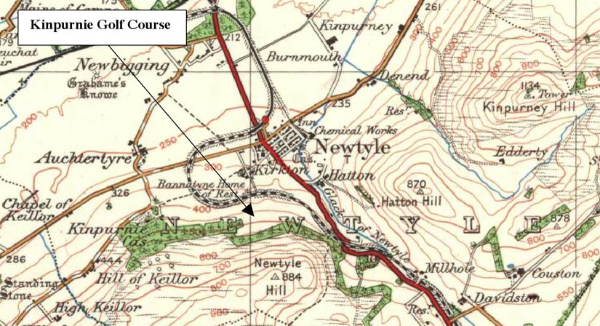 Kinpurnie Golf Club.  Instituted 1912.  A 9-hole course on land leased from Sir Charles W Cayzer, six holes in Bannatyne hole and three on Auchtertyre Hill. The minutes of 6 Aug 1912 state “There are apparently a great number of lost balls and it has been agreed that found balls are to be sold by the greenkeeper for 3d, 1d to the finder, 1d to the club and 1d to the greenkeeper. The Greenkeeper was also to keep a book showing date, the loser’s name, where lost, make of ball and witnesses. He was further to keep a second book showing date, the finder’s name, where found, the make of ball and name of witnesses.” 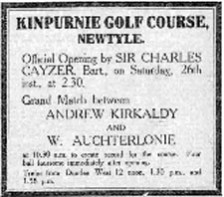 It was agreed that Sir Charles Cayzer would be invited to open the course officially on 21 September 1912, when a match would be played by the professionals Archie Simpson and Andrew Kirkaldy, for a fee of 3 Guineas plus expenses.  Prior to this Archie Simpson was taken round by the Captain, following which he said ‘he would not care to ask a brither professional to play over the course’, However, with a lot of work (which he thought would cost in the region of £150) he thought the course would be very good indeed.’ The opening was postponed and a dispute arose between the club and Sir Charle’ factor about the lack of work on the course promised at the outset by the estate.

Is The Hope Of

At Opening Of Kinpurnie Golf

Newtyle’s great ambition is to become the playground of Dundee. The inhabitants of that picturesque village have no desire to lead a self contained existence, but are rather anxious that a stronger link between them and the citizens of Greater Dundee should be forged.

Newtyle offers many inducements to Dundonian’s, and her claim to be regarded as their favourite rural retreat is unquestionably a fair one.

If enterprise can effect it, Newtyle in the near future will bound into prominence as one of the most popular country holiday resorts within easy reach of Dundee. In popular parlance the village is going ahead.

Abundant proof of that was afforded in the opening of a beautiful golf course on Saturday on Kinpurnie estate. 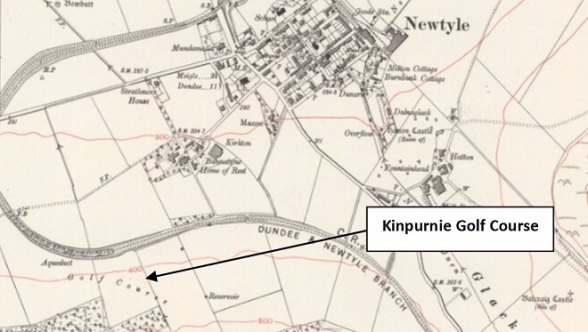 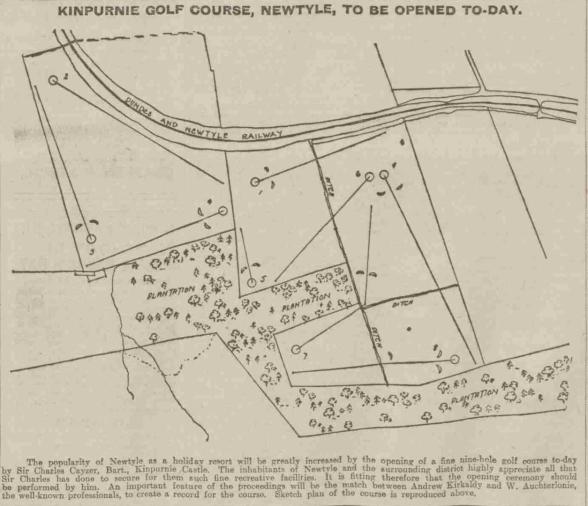 Thanks to the spirit of enterprise everywhere apparent in Newtyle, the suggestion of two years ago has become an accomplished fact. There are many towns and villages throughout Scotland which date their development from the time they became possessor of a golf course, and Newtyle is not at all likely to prove an exception. The village is an ideal health resort ; stands high, and is charmingly situated. Unlike many golfing centres its attractions are by no means confined to the course.

The lover of the country will find in its lanes and valleys, hills and woods, a limitless source of pleasure.

The opening of the golf course was a very important event in the history of Newtyle. It was a day of ceremony and enjoyment, and attended as it was, by ideal weather conditions the function proved an exceedingly happy one.

Newtyle folks were given a greatly-prized opportunity of showing to their good friend, Sir Charles Cayzer, Bart., Kinpurnie Castle, the very high place he holds in their regard.

When the idea of providing recreative facilities was mooted two years ago, Sir Charles gave early evidence of his deep interest in the scheme, and throughout the negotiations assisted the promoters in every possible direction.

That generous assistance and the untiring efforts of a band of enthusiasts carried the scheme to a successful finish. A course of an exceedingly attractive nature is now at the disposal of the devotees of the Royal and Ancient game.

The greens are perfect, and altogether the work of laying out rebounds to the credit of Charles Christie ( formerly of Edzell ), the ground prof.

Kirkaldy Eastablishes A Record For The

To establish a record for the course, a match was arranged between Andrew Kirkaldy and W. Auchterlonie, the well-known professionals, and it proved quite a tit-bit of the day’s proceedings. Two rounds were played with the following results : -

The record is therefore 76 for 18 holes. 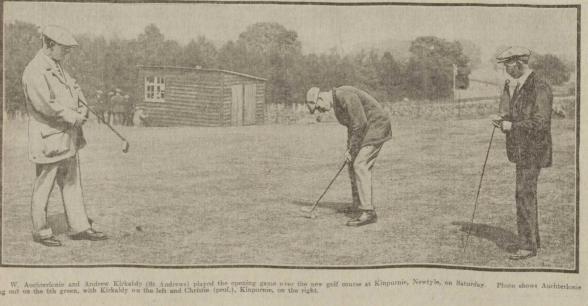 W. Auchterlonie and Andrew Kirkaldy  Photo shows Auchterlonie putting out on 6th green, with Kirkaldy on the left, and Christie ( Prof. ) Kinpurnie on the right.

The Keystone Of Newtyle’s Prosperity

The adjournment from the blaze of the sunshine to the cool of the marquee was a welcome change. Here luncheon was served by Mr R. Gunn, of the Queens Hotel, Blairgowrie.

The health of Sir Charles and Lady Cayzer were cordially pledged on the call of Mr W. R. Macdonald, who in a well-chosen remarks referred gratefully to all that Sir Charles had done for the Kinpurnie club.

“ I hope,” he said, “ all present will look back upon our meeting to-day not merely as an important and a pleasant social function, but as the settling of the keystone of the prosperity of the district.” ( Applause ) They could not forget, nor had they any desire to forget, the valuable assistance received from the late Mr and Mrs Sim Mundamalla, whose memory would forever cherished.

The opinion of the professionals was that in the not far distant future they would have a golf course in Newtyle as good as, if not better than, the best in the district. ( Applause )

The membership at present was somewhere between 70 and 80.

Sir Charles Cayzer upon rising to reply was loudly cheered. In a happy speech Sir Charles said he was sure that now the management of the club had fallen into the hands of the Vice-President, the Captain, and the energetic Secretary it would succeed beyond their expectations. Bidding the members use every effort to work for the success of the club, Sir Charles recalled the headway of another club in which he was interested.

It adjoined a town with 80,000 inhabitants, and it had a membership of 400. Beautifully situated as Newtyle was, within eleven miles of Dundee, with its population of 160,000, what might they not expect the membership to rise to ? ( Applause ) He wished them all success.

“ I Hope,” said Sir Charles in conclusion, “ That I may yet see Newtyle the garden suburb of Dundee.” ( Applause.) 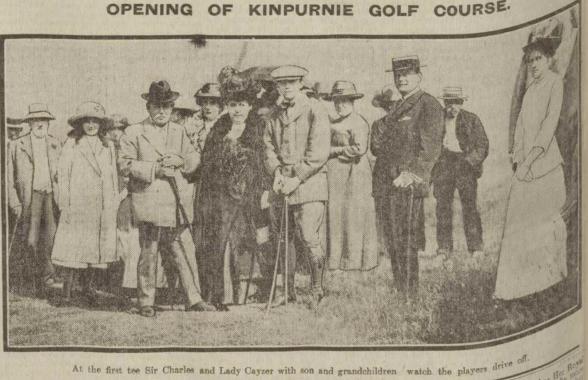 Going To Bed In Relays In Kirrie

Mr W. Ryle Smith, Captain of the Grange club, Monifieth, conveyed the greetings of his club, and declared that as a holiday resort there was a great future for Newtyle, Kirriemuir this month was simply crowded ; rooms were not to be got anywhere.

“ I am told,” he remarked amidst laughter, “ that in some houses they go to bed in relays.” Newtyle were very fortunate in having Sir Charles Cayzer as their friend. He had been much struck by the lovely views around Newtyle. “ I don’t think you will find a lovelier spot than the valley of Strathmore in the whole of Scotland.” ( Applause.)

He hoped that the membership would be doubled by next year, and that Sir Charles would turn his attention still further in the endeavour to make Newtyle a garden suburb. ( Applause )

Mr P.D. Macpherson, Captain of the Blairgowrie club, hoped that the members of his club and those of Kinpurnie would often meet in friendly conflict. He was sure the Newtyle course would be a tophole one in e very sense of the word ( Applause.)

The formal opening of the course by Sir Charles Cayzer was witnessed by a large crowd. On behalf of the club Mr W.R. Macdonald presented Sir Charles with a suitably inscribed driver, with which he drove off the first ball. Master Charles Cayzer, grandson of Sir Charles, drove the next ball, and later the professionals and club members treated the spectators to some fine games.

“ We Hope,” said the Secretary at the close of the day. “ That Dundee golfers will visit our course. We are convinced that additional railway facilities were given Kinpurnie would become a very popular golfing centre.”

No doubt the Caledonian railway authorities with their great enterprise will give the suggestion earliest consideration.

With golf and a good railway service the future of Newtyle should be a rosy one. 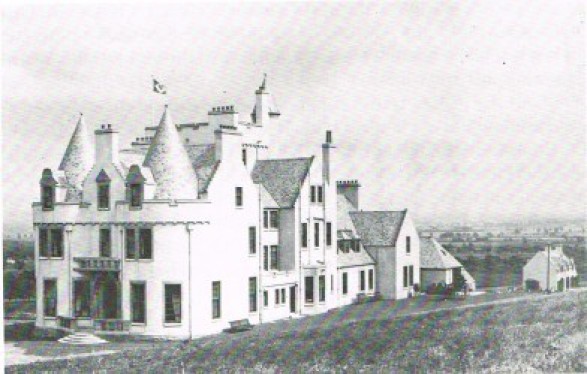