Opening of this course still to be found.

Out of curiosity, I visited the other day ( writes a correspondent ) what is now known as the Ruchill golf course. A big tranformation has been affected in the area. In place of trees and allotments there stand streets of imposing three-storeyed tenements, while on the higher ground numerous blocks of workmen’s houses are in various stages of completion. The remnant of the ground which has been set apart for a municipal golf course is on the North side, beside the canal.

There are nine holes, the longest ( 345 yards ) being the first and old seventh. Though there are many changes in the old course, fortunately the tricky mashie shot at the side of the water is unchanged. Practically all the greens will require careful attention if a good covering of grass is desired next season. Some of the tees, particulary the ninth and the fourth, were stretches of mud. These are inexcusable, as there is plenty of ground in the vicinity for frequent changes. It struck me that the greenkeeper will be well advised to cut the holes occasionally in other places than the centres of the greens.

Ruchill Golf Course was popular for many years with golfers in the city, but in 2000 the city council closed the facility and money was issued by council to establish redevelopment plans. The golf course has a former railway tunnel running under it, named the "miley" by locals as it was around a mile long. It was formerly part of the Lanarkshire and Dunbartonshire Railway, linking Maryhill Central railway station to Possil railway station. There was also a tunnel linking Ruchill to the Lambhill area. The tunnel ran under the Forth & Clyde Canal, which ran through the golf course. This tunnel is known locally as the Halloween Pen. It was not a railway tunnel but a tunnel used to herd sheep through in the past when the area was still relatively rural.

On 17 September 2009 Ruchill Golf Course was reopened by Colin Montgomerie. However, use of the club house and regular play did not commence until after the open evening on 1 April 2010. The course – now officially termed the "Ruchill Community Golf Facility" is now run by Culture and Sport Glasgow, part of Glasgow City Council, and is a nine-hole course, designed with Colin Montgomery's input, apparently suited for developing and established players.

Funding (around £6 million) was put in place to transform the derelict nine hole course, which was changed into a facilty of a professional standard.

Top Scots player Colin Montgomerie has been involved in this process. The course was in use from the 1920s until it closed in the late 1990s due to a lack of funding to maintain the course. 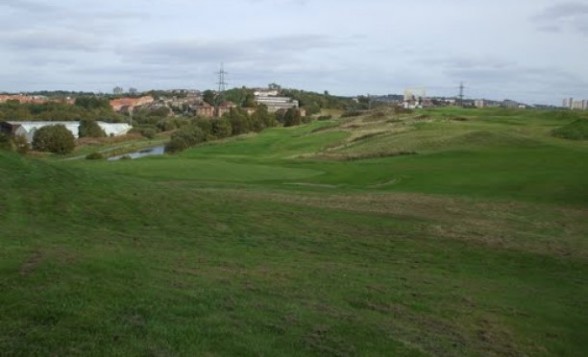