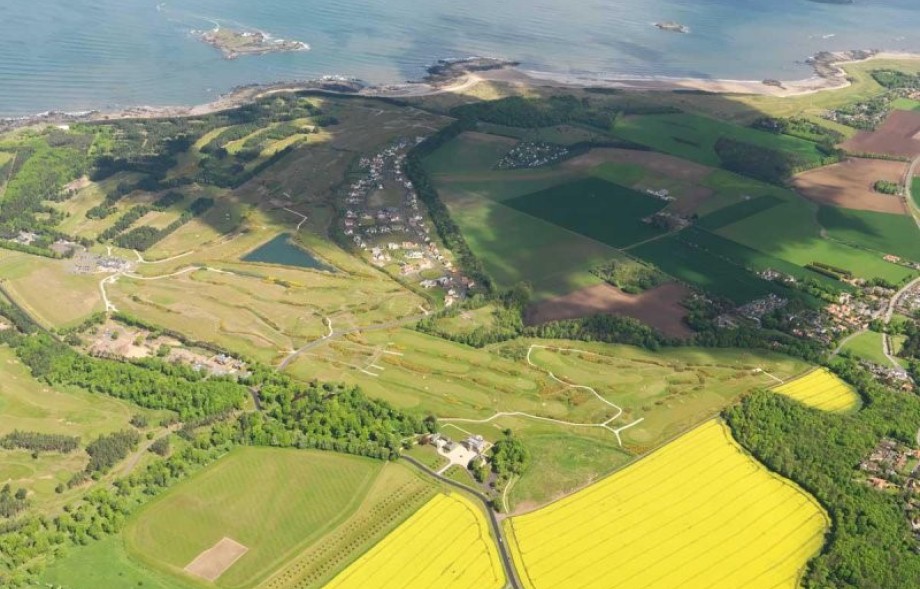 Instituted 1869.  An 18 hole course in the grounds of Archerfield House.

The golf course at Archerfield was laid out in 1869 and following the formation of Archerfield Golf Club at a meeting held in the Castle Inn, the course was opened in June of that year. The founder members asked the landowner Rt. Hon. Nisbet Hamilton for permission to use Dirleton Common and he not only consented to the request but desired that his name should be placed among the Club office bearers as its first president. His daughter Miss Nisbet Hamilton presented a Medal and her mother regularly gifted a set of Tom Morris's best clubs for the winner of the Club competition.

The course was laid out between Dirleton village and the sea, on formerly common land, shared by the property owners in the village. As the properties were sold individually the communality of the land was lost and Dirleton Common became part of Archerfield Estate. The course was private and played only by Archerfield Golf Club, the tenants of the mansion house, their guests and golfers of fame and repute who were given the authority to use the links. Names such as Robert Maxwell, Freddie Tait, Harold Hilton and Johnny Laidlay among the amateurs and Ben Sayers Sen., Jack White and Willie Park Jnr. among the professionals found the course an ideal retreat from the congestion of Gullane and the West Links at North Berwick.

As a special consideration the staff of Archerfield and their families were also allowed to golf on the course. The Watt brothers, Willie, David, John and James whose father was the forester learned to play the game at Archerfield. Willie and David were Scottish Professional Champions, Willie was also professional to the Royal Automobile Association and James established a successful club making business in North Berwick.

For many years the course consisted of 13 holes until James Low, the proprietor of the Scotsman newspaper, became tenant of Archerfield House. It was Low with the advice of Ben Sayers Sen., who enlarged the course to eighteen holes and appointed Archie Shiells as greenkeeper. The first two holes were laid out north west of the Mansion House. The next six stretched north, towards the Firth of Forth, sheltered from the west by a plantation of trees. The 9th, measuring 236 yards was the most picturesque on the course, the green nestling beside the dunes. The 154 yard 10th faced eastwards along the shoreline towards Yellowcraig Wood, before the course turned south, looping back towards the 14th which shared the 5th green. The 15th (Elbotle In) 16th (Strabauchlin In) and 17th (Castle) shared greens with the 4th 3rd and 2nd holes. The Home Hole ran parallel to the first fairway, ending near a wooden pavilion beside the 1st tee.

The total length measured 4,068 yards with most of the holes under 300 yards, thus suiting the early feathery and gutta percha balls of the day. While a number of the greens were reachable with a good drive and three could be got with an iron, three holes were longer and could be described as par fives. The ground was riddled with rabbit scrapes, a bad lie or lift and drop was a frequent occurrence. A feature of the course were the bunkers, lined with railway sleepers (railroad ties).

Jack White who was educated at Dirleton School and apprenticed as a club maker under Tom Dunn at North Berwick held the course record at Archerfield for some years with a 69. In 1899 Freddie Tait scored 63 to set a new amateur record which was never beaten. Tait was Amateur Champion in 1896 and 1898. Jack White went on to win the 1904 Open Championship and presented the driver he had used to his Dirleton Parish Church Sunday School teacher.

First class seaside course.  Greens keen.  Fine views of the Firth of Forth and its islands.  (WWG)

The course at Archerfield survived until 1940 when the land was commandeered by the Ministry of Defence. The remains of the ministry buildings can still be seen on Dirleton Mains Farm but little trace is left of the original golf course. (ELLS)