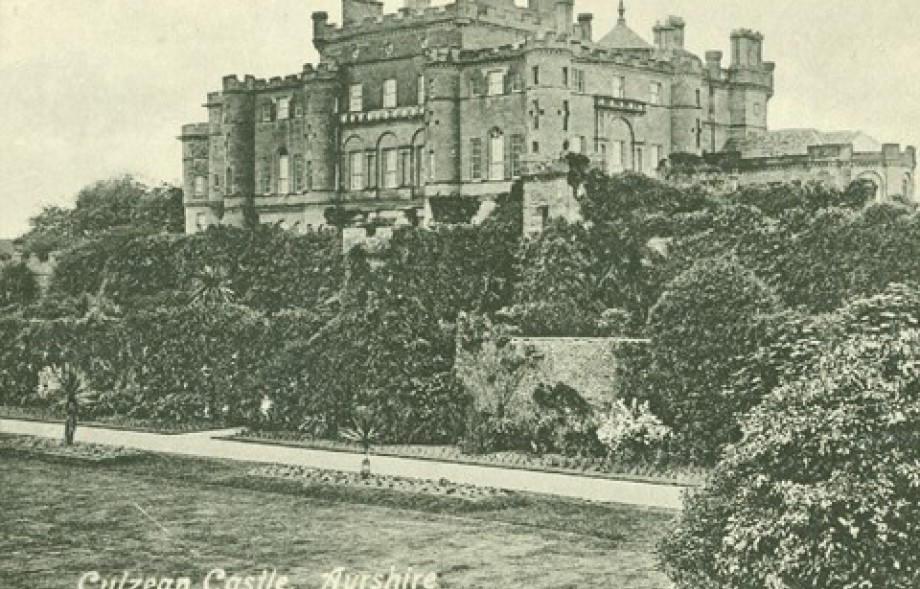 The following private courses have been found in Ayrshire:

“Obituary to an old Troon Player

A correspondant writes :- On Wednesday Dr Highet was laid to rest in Crosbie Churchyard. Although the club was founded in 1878 ( Troon ) it was some years before the course was in what might be termed playable order, so much so that many preferred to play on the private course of Mr D.Y. Stewart at Barassie.” (GET 15.12.1905)

Coodham House, Symington. “Fairlie and Old Tom regularly stayed at Coodham and played golf in the grounds while they were planning Prestwick.” (Golftoday 21.2.2011) 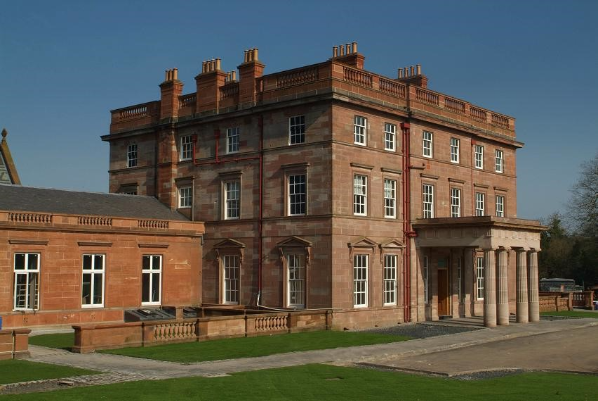 James Ogilvie Fairlie would own Coodham from his mothers death in 1841. He was to be a character of considerable note and a most significant personage in Scotland’s golfing history. A member of numerous old clubs including, The Honourable Company of Edinburgh Golfers, ( Muirfield,) North Berwick golf club, Old Prestwick and the Royal & Ancient, St Andrews.

He invested heavily in golf, inventing, designing, and manufacturing clubs, and was a major factor not only in the founding of the British Open Championship, but was instrumental in it being hosted at Old Prestwick for the first 12 years of its existence.

Some of the early champions and the course designers that made Scotland’s golf courses what they are today, no doubt spent some time relaxing at Coodham. During his tenure, Fairlie returned the estate to the anglicised version of its name and Coodham was truly born. Fairlie had his own six hole course on the estate.

In 1871, the golfing era for Coodham ended when Fairlie sold the estate. 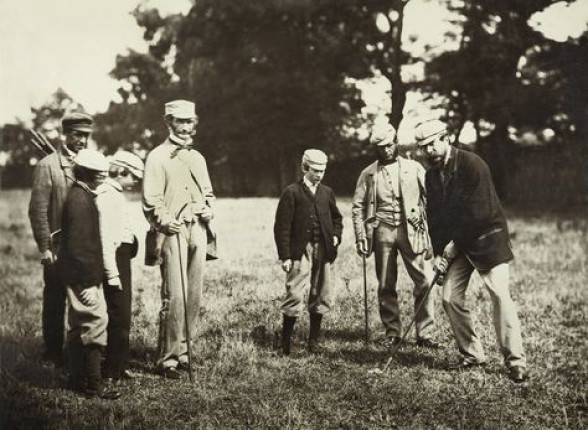 Fairlie, with club in hand, and Morris looking over him. 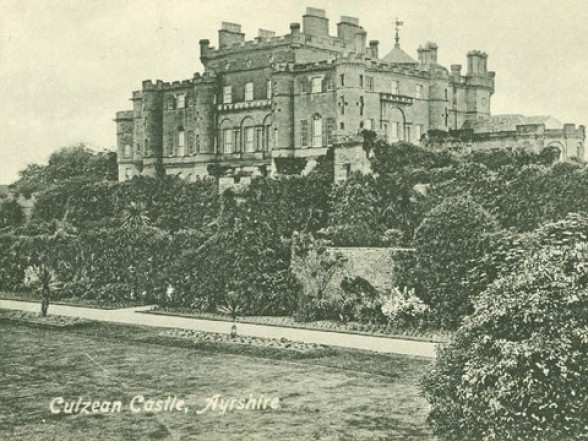 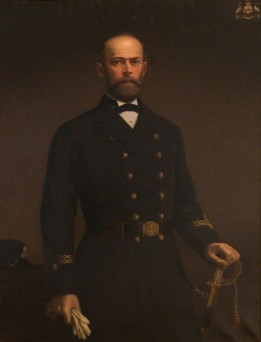 "The course at Culzean was laid out in the Deer Park in 1893 for Archibald Kennedy, Third Marquess of Ailsa. ( In Picture ) He was a member of Prestwick Golf Club and was Captain of the Club in 1899 despite only having taken up the game the previous year after a stay in France. In March 1898 during an extended stay in France he became a member of Pau Golf Club at Plain de Billere.

Having become an enthusiast but being in financial dire straights he engaged the French professional from Pau to give him golf tuition not only in France but to come to Scotland for three months in the Summer and Autumn  of 1898 to continue the tuition at Culzean. He intended at the time also to use the services of the French Professional to lay out the Turnberry links as a private course. He then changed his mind and decided to have a private course laid out in the deer park at Culzean  which would be more convenient for practice. By May of that year he engaged Charles Hunter, the Professional at Prestwick 'to settle about the putting greens' of the new course at Culzean and work began at once under the supervision of John Campbell from Kirkoswald. Some of the putting greens had been formed by June when Dominique Coussies, the Professional from Pau, arrived to cut the first holes and 'complete the fitting up of the course'. “ (Bonnie Links O' Turnberry ) 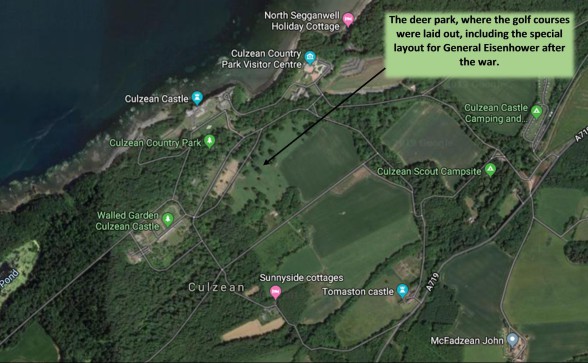 “A golf tournament, in which eight of the Ayrshire professionals took part, came off over the Private course of the Marquis of Ailsa at Culzean on Saturday. The course, a nine hole one about a mile and a half in extent, and situated within the Policies of Culzean was laid out by Lord Ailsa in the spring of this year.

Lord Ailsa, who has only just recently taken up the game, has been having lessons from Dominique Coussies, a Frenchman, and one of the professionals at Pau, and it was on the occasion of Coussies returning to France this week that the tournament was got up. The professionals invited were, W.Fernie, Troon, John Hunter, Prestwick, Jas. Kinnell, Prestwick St Nicholas, D.Coussies, Pau, G.Dunn, Biarritz, C.Neaves, Bogside, J.Tulloch, Gailes, and S.Gardener, Troon.

The course is a nine hole one, and the competition was a double round, or eighteen holes, and Lord Ailsa, offered two handsome gold medals to the lowest scores prior to entering the competition, all the competitors had a preliminary round. The first round in the competition resulted in John Hunter leading by 3 strokes from the next lowest scorer, Fernie the Troon professional, with whom he was playing: while Tulloch, Gailes, was 2 behind Fernie, the others following in a less favourable position. In the second round, the Prestwick professional got an additional stroke ahead of his nearest opponent at the third hole, but Fernie gained back the stroke at the next hole, and, with some luck, further reduced the lead against him to 1 stroke at the fifth, where he got down in 4 to Hunter’s 6. The next three were halved, and the latter, with a stroke in hand, looked the likely winner. His short game was faulty however, and Fernie, getting down a long putt off his approach, succeeded in squaring the game, each finishing the double round in 77. None of the others approached this, and it was decided that the two winners should play off for premier place. It was agreed that the tie should be decided by a match of five holes, and as Fernie won the first three, he was adjudged the winner. At the conclusion of the game the medals, which bore the following inscription “ From the Marquis of Ailsa, Culzean, 24th September 1898” were presented by his lordship to the winners, and Mr Adam Wood, Troon, responded on behalf of the professionals. Mr Wood presented Coussies with a gold medal as a memento of his sojourn in Scotland. At the conclusion of the professional tournament Lord Ailsa and Mr Wood played in a foursome against Mr Harry Hart and the Rev. Mr Muir. The latter won the match by two holes. The professional were entertained to lunch at the castle by Lord Ailsa, and were afterwards shown through the beautiful grounds and gardens.” (AA 29.9.1898)

This course at Culzean was however not destined for a long life and, having been ploughed over during the First World War, it was never to re-open."  Source:  Bonnie Links O' Turnberry

However, another course was laid out. James Braid laid out another 9-hole course in the Deer Park in 1927. It remained open until the Marquess’ death in 1938, and closed in 1939. “The National Trust intends to develop the policies, which include the Home Farm, the buildings of which are very fine and unusual, having been built by Robert Adam. The nine-hole golf course, laid out by James Braid, has rather been allowed to deteriorate during the war years, but it is hoped to restore it in time.” (Scotsman November 25th, 1945 )

Note: The National Trust for Scotland has no record of the course being restored, but a further course was established on the Deer Park

A third course, strictly private and for the use of General Eisenhower during his occupation of the castle from 1946 onwards as a than-you for his services to the country during the war. “The castle has a nine-hole golf course which should appeal to General Eisenhower who, it is understood, enjoys a game of golf.” (S 26.11.1945)

British Pathe archive has a film of General Eisenhower and his family visiting Culzean in 1962, which contains, inter-alia, shots of him playing golf with the Marquess of Ailsa on the private course, and of the pavilion. 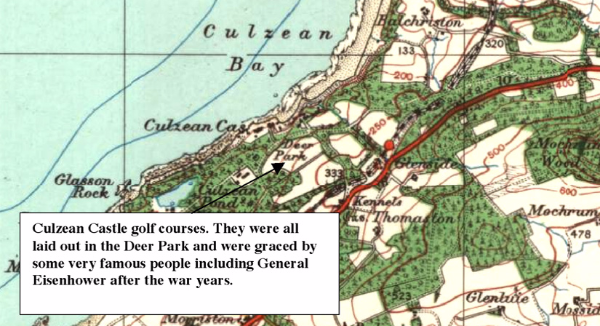 Glaisnock House, near Cumnock. First mentioned 1900. “The members of our golf club with a few other friends spent a most pleasant and animating afternoon at Glaisnock House on Saturday last having been most and considerately invited thither by Mr and Mrs Marshall. The weather being beautiful, the golf course was extemporised on around the front of the palatial-like residence on which several matches were played with evident delight and great and hilarious joy. Mr Marshall is tutored from time to time by the well-known professional, Mr Tom Fernie, who, with the assistance of the head gardener, advised in the layout of the golf course.” (KS 3.7.1900) 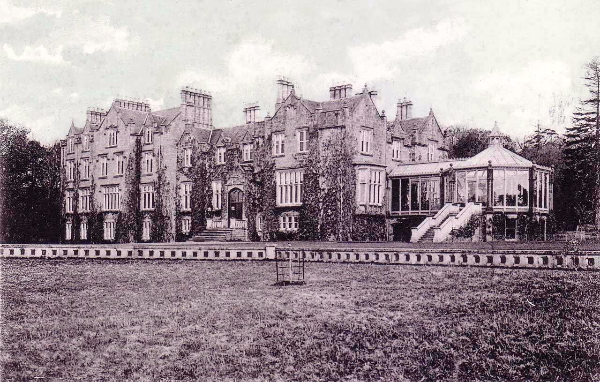 Monktonmain Farm. “When Prestwick St Nicholas moved from the Prestwick course in 1877 to find a new course, the location of Monktonmain Farm, in the grounds of the Fairfield Estate, was chosen. For whatever reason, the members only played one medal there and the set off in search of another location for their course.” (Club History) This is the only reference to Monktonmain, and it is not known if a course existed before Prestwick St Nicholas came, or whether a course existed after it left.

Skelmorlie Castle. Advert for sale of the estate includes:- “Golf Course on the estate.” (YP 28.5.1927) No other references have been found.

Wellwood House, Muirkirk Ayrshire. A 9-hole course, in the grounds of Wellwood House, the home of Colonel J G Baird MP. Opened I 1906, it closed at the beginning of WW1 when the house became a convalescent home for Belgian survivors of the war. Matches were held with Muirkirk GC.