Musselburgh New Golf Club. Formed 1893. At a  meeting of the Musselburgh Golf Club 40 balls were found in the Ballot Box when only 34 members were present. This led to a split in the club, and a significant number of members resigned. At a special General Meeting the Club was dissolved and immediately reformed with no change in Office Bearers.

Those who resigned formed the Musselburgh New Club, still playing over the Old Links. 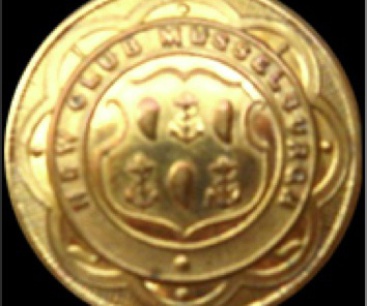 “A meeting of gentleman interested in the formation of a new golf club at Musselburgh was held in Dowell’s Rooms, Edinburgh, yesterday. Mr Marcus J Brown.SSC, who presided, detailed the steps taken by Mr James Gibson and himself as regards the purchase of the clubhouse at Musselburgh belonging to the Honourable Company of Edinburgh Golfers. The minute of agreement was, Mr Brown said, to the effect that the Honourable Company agreed to sell to Mr Gibson and himself the club property at Musselburgh, consisting of the building, grounds, and fixtures, fittings, and furnishings therein, at a sum of £800; that the new club should extend annually the uses and privileges of the club to the members of the Honourable Company, except in regard to club competitions and management; that the Honourable Company should pay annually the sum of £150. which sum was to include the contribution towards the upkeep of the green; and that the different privileges and payment of £150 be guaranteed for a period of five years. It was now proposed that Mr Gibson and himself hand over to the new club the benefits and obligations contained in the agreement. There were already upwards of 80 gentlemen who had indicated their willingness to join in the new venture.

On the motion of Mr William Dougall, those present resolved to form themselves into a club, to be known as the New Club, Musselburgh, and that such new club accept and adopt the minute of agreement, together with the whole benefits and obligations therein contained. The following were appointed council and Committee of Management (to hold office till the first general meeting in May next:- Messrs Kinloch Anderson, M J Brown, Thomas Carmichael, William Dougall, Dr L R Gray, R T Inches, A P Purves, G G Smith, and G S Turnbull. Mr G S Turnbull proposed a resolution to the effect that the parties present and other members to be afterwards proposed to the number of 100 should be charged £2.2s, and that additional members should be charged £3.3s – those charges to include entry money – for the period to 31st December 1893. Mr A Gillespie seconded the resolution, which was adopted, and thereafter Mr Garden G Smith was elected captain of the club. That was all the business.”

“At the annual dinner of the club after the competition Captain W Andrew presided, and the hon, secretary, Mr T J G Hunter, SSC, was croupier. Captain Sanderson, of the Royal Musselburgh, and Captain Provost Mackie, of the Edinburgh Burgess Golfing Society, who were invited guests, sent apologies for absence, among others. In the course of an excellent musical programme and short toast, Mr J B Paterson, a member of the Edinburgh Burgess, proposed the toast of the New Club, and in the course of his reply Captain Andrew alluded to the proposed extension scheme. He said it would be the making of Musselburgh. There was no doubt that the associated clubs would join in supporting the Council, both financially and otherwise. What was necessary now would be to have a meeting of the Councils of the Clubs with the Town Council to formulate a scheme and decide to what extent support from the clubs was required. Considerable regret was expressed by those present when in the course of the evening it became known that the Council had abandoned the scheme.”         (Scotsman 10.10.1906)

The two Clubs amalgamated in 1909.