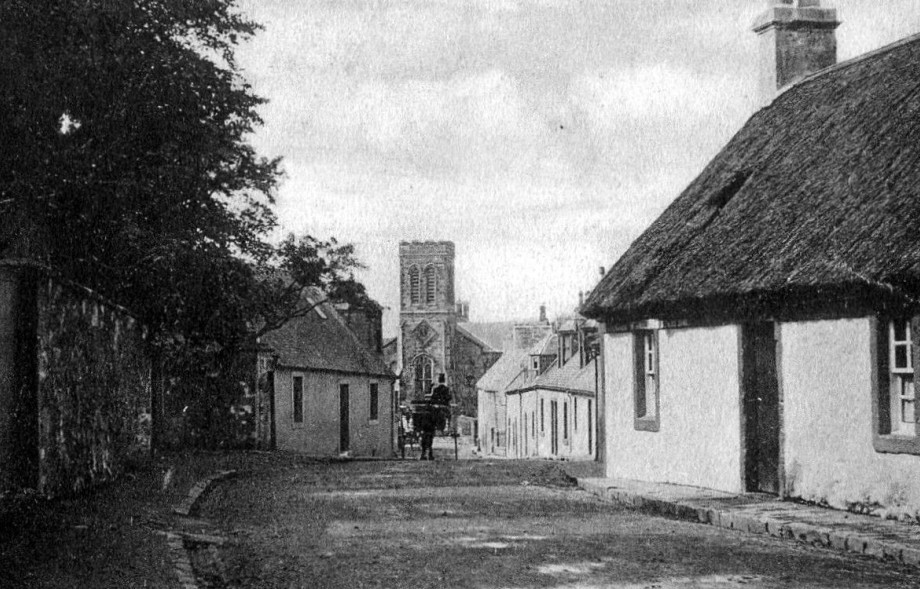 First Course. ‘A golf club has been started in Dunlop. A lease of fields has been taken on Hapland Farm, a short distance from the station. The course is one of nine holes. There are already over 100 members, and the number is increasing rapidly. The following office bearers were appointed at the General meeting :- Captain , Mr J. McLellan, Treasurer, Mr Robert Highet : Secretary, Mr Wm. G. Wylie.” (KS 20.6.1909) 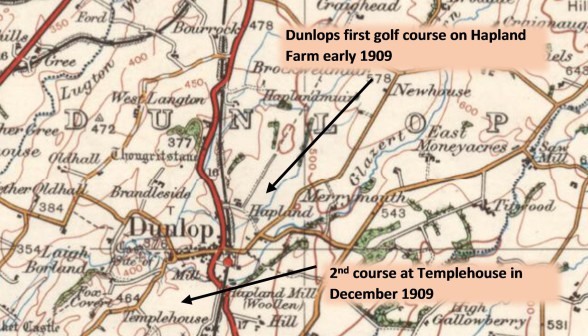 Second Course. “The Dunlop club have now taken a lease of Templehouse Grounds for their new course, which is admirably suited for the game, and is being laid out on the lines suggested by Mr McMillan, Western Gailies. The turf is very old, and has been most favourably commented upon. The ground is of a sporting character, being varied and undulating, and should be an additional attraction to the village. It is easy of access, being only about twelve minutes walk from the station, and about two miles from Stewarton. The membership fee of 10s for gentlemen, and 5s for ladies is very moderate.” (ASH 3.12.1909) 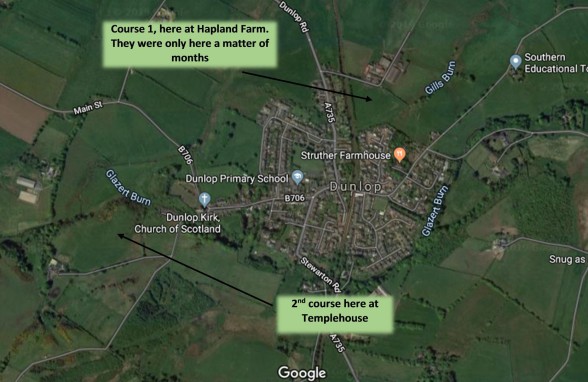 “Quite a field day took place at our course at Templehouse last Saturday. The mixed foursome competition had entries for no fewer than nine quartets. Victory was secured by Miss Gemmill and Mr A. Kirkwood Jun, followed Mrs Craig and Mr Docherty. At the finish the large company, 50, were regaled with tea and cake and this service, partaken in the open on the hill top and also surrounded by scenery of Mountain, sea, and Landscape, charmed the eye and mind. Then Mrs Wilson Westwood, wife of the esteemed president, presented prizes to the winners in the foursomes above, gifted by the Captain; the Francis Henderson cup together with gold badge, the latter gifted by the club and becoming the property of the winner, Mr A. Kirkwood Sen. The president’s monthly competitive medal for the year to Mr Hugh Brown, the club also gifting Mr Brown with a gold badge.” KS (9.9.1911)

There are records showing competition results from 1911 through to 1915, when at the AGM it was agreed to grant the freedom of the course to all military personnel, nurses and staff stationed at the Military Hospital in Dunlop House. It was also agreed to retain the membership of those members serving in the Forces. No references have yet been found as to how long the club remained open, if it did, in the remainder of WW1, although the following extract suggests that the course was in use in 1919, and after the war.

“Arrangements have been made whereby the golf course has been secured for another year, and we trust that renewed interest will be manifested by the community in this helpful adjunct to the many and varied attractions of our village life, which are commanding the attention of would be permanent residenters, as likewise that of those who are in search of houses for the summer months.” (KS 13.3.1920)

“The annual general meeting of the golf club was held on Friday of last week. Arrangements have been made for the continuance of the much prized facilities for the game of golf, and the club have high hopes that since the subscriptions have been continued at such low rates the community, together with visitors, will give generous support to their venture and raise the number of members to a point beyond that of any previous season. The subscriptions are:- Gents, 15s; ladies and youths under 13 years of age, 7s 6d. Together with a committee the following office bearers were appointed:- Hon. President, Brigadier General J.A. Houston Crawford, Dunlop House; President, Mr Robert Wilson, West Hurlet; Vice President, Mr Robert Clement, Kirkland; Captain, Mr James Wilson; Vice Captain, Mr R. Henderso ; Secretary, Mr H. McCowan. Craigellan; Treasurer, Mr Robert Wilson, Burnhouse.” (KS 10.4.1920) 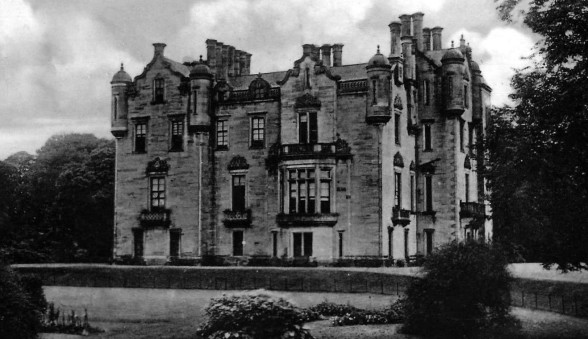 “On Saturday last, favoured with a brief spell of summer, the first organised meeting of the season gathered to countenance and take part in a mixed foursomes game. There was a most gratifying attendance, numbering between fifty and sixty. The excellent condition of the course called forth many expressions of surprised satisfaction and reflects great credit on the efforts of the recently appointed greenkeeper. In the mixed competition the first prizes were won by Miss Margaret Currie and Mr Andrew Gibb, and the second by Miss Ina Mackie and Mr Robert Howie. In the gentlemen’s foursomes Messrs L. Peacock and H. Hogarth were the winners. The club room was fitted up with tables and transformed into a tea room, where “ the cup that cheers” purveyed by Miss King, was in much demand, as was also the temptsome catables that were provided.

The function was a surprising success and augers well for the future prosperity of the club.” (KS 8.5.1920)

“The golf club has been for some time face to face with such a combination of impossibilities that the struggle for continued existence has had, with much reluctance and deep regrets, to be abandoned as hopeless. Approach was made by a likely buyer with a view to purchasing the club-house and other effects. It was felt that the public support accorded the golf club for the maintenance of parochial recreation made it imperative that the needs of other local recreative agencies should not be overlooked. The Tennis club were opening their new courts to-day and were without a club-house. The circumstances called for immediate action, and arrangements were made to let them have the golf club-house at once and at such a valuation as when the golf club’s other effects are realised and all their debts met there will be a sum to hand over to the war memorial’s outdoor recreation committee towards the cost of erecting a club-house in connection with the football pitch. The division of the golf club’s surplus assets between the two existing organisations has been adopted as being the best solution of the problem of how to satisfactorily dispose of the monetary support that had been extended to the club by interested friends.” (KS 15.4.1922)