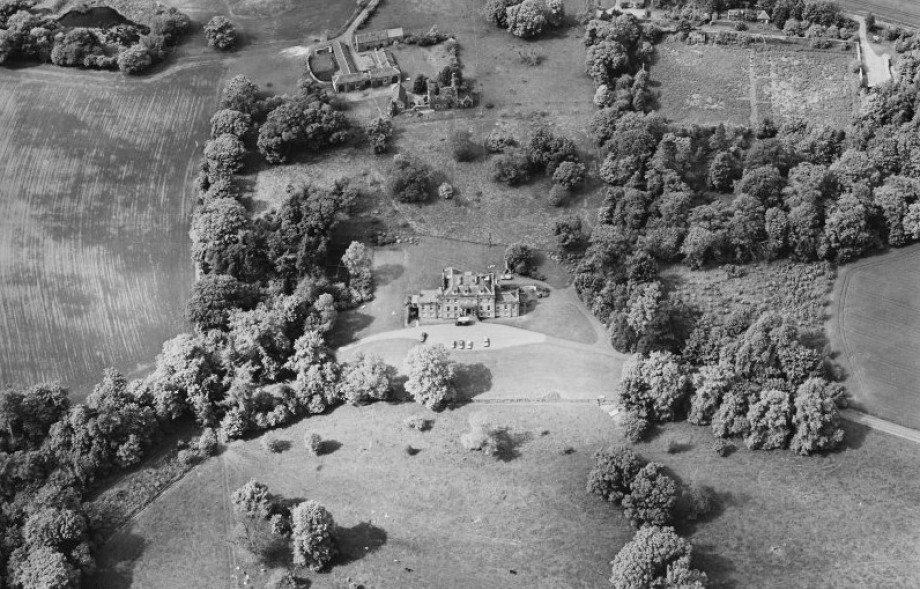 The following private courses have been identified in Fife:

Clifton Bank School. First mentioned 1893. “The return match between Clifton Bank and Madras College came off at St Andrews, and again resulted in a victory for Clifton Bank, this time by 8 holes.” (GH 15.7.1893)

“Match at Clifton Bank – A team of former pupils came from Glasgow but had to succumb to the superior play of the present pupils. All the winners were round the new school course under the hundred, Longmuir being 90, Miller 91, F. Ballingall 93.

“The senior golf medal for the present session fell to H F Henderson, with the creditable total of 200 for the two rounds. Subjoined are a few of the scores:-

The junior medal fell to J A F Henderson, a brother of the senior winner, his score being the unusually low one for a junior of 106.”

Garpit Golf Course. In 1818 Scotscraig Golf Club was established, and William Dalgleish of Scotscraig was elected captain. A section of his lands, the Garpit, included a racecourse, within which golf was played over six holes, but no records exist to show for how long this had been done. In the article on the founding of the club and the first competition for the Gold Medal, the Caledonian Mercury reported “As these links are unknown, it may not be unnecessary to remark, that they consist of a piece of ground, which unites the most beautiful playing surface with the most interesting hazards, and have been happily selected by the liberal proprietor of the ground, the present Captain of the club.” (CM 5.10.1818) Indeed, all the club’s competitions were decided over three rounds of the Garpit’s six holes. In 1835, the course was ploughed up and the club went into abeyance. It was reconstituted in 1887, but its first course proved unsatisfactory, and a further course was laid out on the area of the old racecourse and Garpit course.

While the origin of the Garpit is not known, it is fair to assume that, being a keen golfer and a member of the St Andrews Golfing Society, William Dalgleish had the course laid out at first for his personal use.

“The healthy outdoor life with occupation is secured by the retreat being situated in pleasure grounds of large extent, and by the provision of such outdoor occupations as gardening, golf, and tennis.(S25.3.1904)

“The Sanatorium, a retreat for inebriates.came under the financial and administrative control of Dr W H Btyse in April 1909.”

“An interesting golf match took place on the private golf course at Invernith Lodge Sanitorium on Saturday. The course, which extends to nearly 6200 yards, has recently been greatly improved under the direction of Dr Bryce and his brother, Mr R.J. Bryce, and it is now in every respect a first class inland course, presenting many features of a very sporting character. In the morning, Andrew Kirkaldy, St Andrews, partnered Dr Bryce against Mr R.J. Bryce and Jack White, Sunningdale, the latter couple winning the match by 3 and 2.

In the afternoon the same players played a four ball foursome, and in spite of a strong South Easterly Wind, Jack White succeeded in finishing with a score of 76, an excellent performance for the course.

Both the morning and afternoon matches were watched by a considerable gathering of spectators, who were treated to an exhibition of first class golf. It may be mentioned that in the afternoon the best ball of Mr Bryce and Jack White completed the round in 70.” (SAC 29.10.1910)

Kemback House, Dairsie. A report of the camp of the Dundee Battalion of the boy’s brigade at Kemback in July 1906, describing the facilities available to the boys included “Within the camp limits the boys have ample facilities for field sports, and the Kemback Private golf course is close at hand,

The present owners of Kemback House have no knowledge of the course. 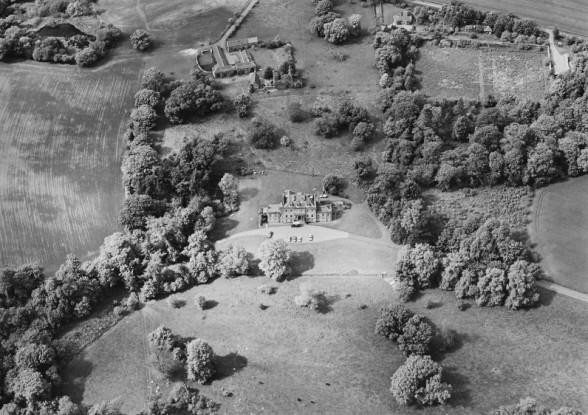 "A golf club has been started in connection with the kindergarten department of this school. The first match of the season took place over the school course on Tuesday afternoon. The best scores were :- David Ballsillie, 41 ; Charles M. McKenzie, 45 ; and Peggy Manson, 54. William Roger and Hugh Manson tied for 44 ; but, on playing a second round, Hugh Manson won with a score of 43. There is a membership of over 30."

St Leonards School, St Andrews. Laid out 1893. “A short golf course of 9 holes has just been laid out by Tom Morris for St Leonards’s School. The green is within the large expanse of private grounds adjoining he school, and is of a suitable description for the game. The distance between the holes, though not so great as on an ordinary driving course, is greater than is usual on putting links.      (St Andrews Citizen 3.6.1893)

There was a six-foot high wall, which had to be crossed twice, providing ample hazards.

“In 1895, the noted obstructive wall was removed during the creation of a driveway from the Abbey wall gate up to the then hospice. The exact location of the course is somewhat harder to pinpoint accurately. It was close to the cricket grounds as one pupil in summer 1895 wrote about running after a cricket ball that she then found on the golf course. Quite possibly the lower ground of the big fields, as they were known, were used for golf and the upper area for cricket. The course however, was not well maintained and although there are autumn medals in 1896 and 1897, by 1899, due to levelling work being carried out in the big fields from 1897, the medals were played elsewhere, like the Jubilee course in 1900. Records available at present for the course seem to suggest that it was only played upon for six years from 1893 to 1899.” (Reproduced with the kind permission of Roger McStravick from his book “In the footsteps of Old Tom Morris”, issued 2015)

Springfield House Golf Course.The autumn competition for the medal presented to the Cupar Golf Club by Mr Richardson, of Restalrig, took place on Saturday. At a meeting of the club held previous to the competition, Mr John Taylor was admitted as a member. It was agreed that the match should be played on the park at Springfield House, which had been kindly offered for the occasion by Provost Swan. The weather was fine, and the ground in good condition, but the members being unaccustomed to the ground, the play was not quite up to that of some former competitions.

Eight couples contested the game, which consisted of three rounds of 6 holes each. At the close of the competition the lowest scores were found to be as follows:- Mr Wm. Morrison, 82; Mr Bayne Jun. of Foodie, 83; Mr J. Taylor 85; Captain Manwell 89. In consequence of a misunderstanding as to the rules under which the match was played, some doubt arose as to whether the medal rightly belonged to Mr Morrison or Mr Bayne – several members alleging that the former had lost the game by the infringement of one of the St Andrews Rules with reference to lost balls. It appears that other members were ignorant that the St Andrews rules were applicable to the match. It was ultimately agreed to refer the matter to the Captain. Several interesting foursomes were afterwards played.

We learn that owing to some misunderstanding in Saturday’s competition, the medal will again be competed for on Thomaston Links on Saturday fortnight." (FH 20.10. 1870)

"The autumn meeting of this club (Cupar) was held on Saturday, when three new members were admitted. The Victoria medal, presented by Mr Richardson, was played for in a park at Springfield House, kindly granted for the ocassion by Provost Swan, and was gained by Mr Morrison, Procurator Fiscal, with 93 strokes. Owing to the length of the grass the scoring was much higher than when the club played in the same park in October 1870. In the evening the members dined together in the Royal Hotel." (FH 24.10.1872)

No exact dates of the life of this course have been established. 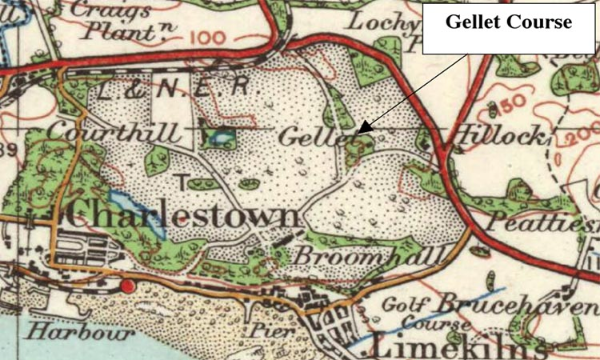 Leuchars. A golf course is to be laid out at Leuchars, in Fife, where the game was played sixty years ago, and where it was given up. The ground at Tentsmuir has been found suitable by Tom Morris." (ET 4.12.1896)

The earlier course was laid out by Allan Robertson.

No other references to this course have been discovered.