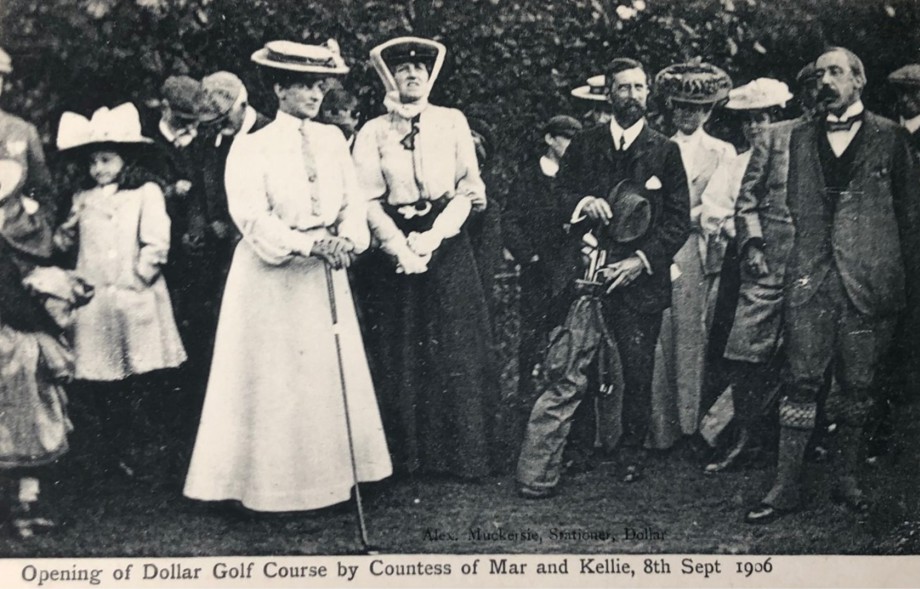 This club actually went to the wall for six months and bounced back as a nine hole course. They are now on their third course. Their two previous courses were at Market Place and Gloom Hill.

Proposed formation of a golf club

There seems a not altogether remote prospect of the Royal and Ancient game of golf finding a permanent habitat in our midst. At a meeting of golfers, held in the Museum Hall yesterday, the initiative was taken in connection with the formation of a course and the subsequent establishment of a club. Although it is perhaps premature to suggest what may be resolved upon by the committee appointed to carry out the preliminary arrangements, it is quite safe to say that, should a club be formed, there will be no lack of ardent supporters.

About 40 gentlemen have already signified their readiness to become members, and there is no doubt that when once the club is got thoroughly under way, there will be no difficulty in maintaining its vitality and success. 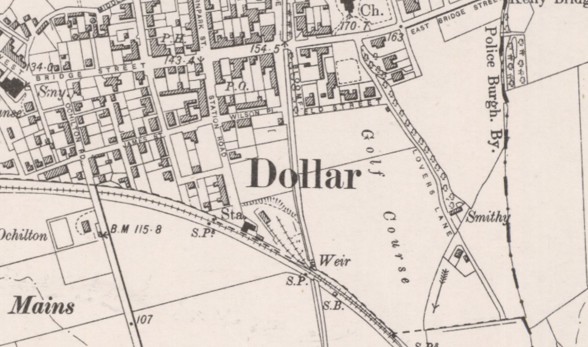 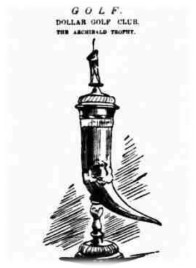 Major Archibald of Derinshaw has just presented the Dollar golf club with a very handsome trophy ( of which the above is a sketch for annual competition from scratch. The prize takes the form of a artistically mounted horn, set on a solid silver pedestal and plinth, and surmounted by the figure of a golfer in the attitude of driving off a ball. On the base there is a silver plate bearing the following inscription –

The trophy, which is in the meantime in the custody of the genial secretary of the club

( Mr Wyles ) will be competed for in the course of the next month.

A handicap prize tournament, promoted by the Dollar Golf Club, took place over the picturesquely situated course at Gloomhill on Saturday. The weather was all that could be desired, while the course and greens had received special attention from the greenkeeper, Mr Robt. Oliver, and were in capital condition. About fifty competitors took part, and at the close it was found the prizes had been gained by the following :-

The next lowest score was John Melvin, Alloa, who, with an allowance of 14 strokes, had a net score of 90. Dr Watson also secured the prize for the best scratch score – 77, the record for the eighteen holes being 72.

On Thursday evening a public Meeting, called by the Provost of Dollar, was held in the Arthenium Hall, Chapel Place, for the purpose of considering the formation of an 18-hole county golf course on Dollar Banks. There was a large attendance, the hall being quite filled.

Provost Fischer who presided, said that some time ago it was proposed that something should be done in the way of attracting people to Dollar, or of extending the town in one in some way or other, and some of them had come to the conclusion that the only thing that could be done was to get up a first-class golf course – Applause – for they sometimes found that some people who had been looking for houses during the summer months simply refused to come to Dollar because there was no proper golf course. Following upon this suggestion a committee has been formed, and negotiations were entered into with the proprietor of the lands of Harviestoun. The services of an expert had been obtained, who, after surveying the place, had come to the conclusion that a good 18-hole golf course could be constructed on Dollar Banks, and the negotiations with the proprietor had proceeded so far very favourably. Of course they could not go on with a scheme of that sort without the hearty support of the public, and that was the reason he had called the present meeting. He need not tell them that it would be a very great benefit to Dollar if they had a proper golf course established, because it had been proved that wherever a golf course had been started and kept up it had paid very well, the town itself had prospered, and expected that would happen with Dollar.( Appl.)

The Provost then called upon Mr Dougall, headmaster of the academy, ( and who had been acting as convenor of committee ) to lay before them an account of the scheme so far as they had gone. Mr Dougall said on behalf of the committee charged with the negotiations, he wished to explain first what had been done : second, the position in which they now stood, and third, what it was proposed they should do. In the first place he wished to say that the proposal emanated from the proprietor of the estate himself – Applause – and that was a point of very great importance, because that was a sort of guarantee that they had not a proprietor who would add difficulties to their scheme, but one who was anxious to make it a success so that they might have such a course as the keenest supporter would be pleased to see. ( Applause )

The next step taken by the committee was to ascertain whether the ground was suitable. The golf club appointed a committee to go over the ground, and they had engaged an expert who had also gone over it. Mr Dougall then read the report of Andrew Kirkaldy who gave the opinion that it was possible to make, at comparatively little expense, a very good 18-hole course on the Dollar Banks. Some of the holes might be short but interesting, and altogether he was very favourably impressed with the proposed course. After getting this report the committee decided to go over the wall on the face of the hill, and thus, the difficulty of short holes had been obviated.

The next step taken was to ascertain as to terms, and the proprietor agreed to lease the ground for £50 a year. He also agreed that for the first two years the rent should not be paid immediately, but that it should be spread over the remaining years of the lease. If this course was to be a success, and especially if it was to be an advantage to Dollar, it would be necessary to attract people from the outside, and with this view the committee had approached the railway company and asked their co-operation.

The railway company had promised to give reduced fares from every station on the North British Line to golfers travelling to Dollar. ( Applause )

Then the proprietor had agreed to give a lease of Brewlands House as a golf club house at a reasonable rent of £35 per annum – the lease to run concurrently with the lease of the course. The next question was how was the money to be got to make a course on Dollar Banks. It might be possible to make a course by operations extending over a number of years, but that did not commend itself to many and it was agreed to make a course, provided sufficient money be obtained and to put down the expenses a s a capital charge. There was only one way of doing this and that was by forming a limited liability company with a capital of £1,000.

It was agreed that the shares be £1, and Mr Kerr had intimated that he would take 400 shares. ( Applause )

One of the objects of his meeting was to ascertain if there was a reasonable prospect of raising the remaining £600. The management, he thought, should be in the hands of Dollar people, and that could only be if the Dollar people took shares. ( Applause )

Mr Dougall then spoke of the advantage of forming a limited company for the carrying out of this scheme, and remarked that after the course was formed considerable expense would be entailed in the upkeep, and it was decided that the annual subscription to members should be one guinea. A card has been placed in their hands as they entered the meeting asking each to say whether, in the event of a company being formed, they would take shares, and whether they would become a member. Upon their favourable reply to these questions would depend the result. If they were promised enough money they would go on with the scheme. ( Applause )

If he, Mr Dougall, were not convinced that this project would be to the interest of Dollar he would not be speaking in its favour. He thought it would benefit everyone in the place – the labourer, the professional man, the merchant, and the retired gentleman – and concluded by expressing the hope that the scheme would be carried out.

Mr J.S. Henderson, after some complimentary remarks on the situation of the proposed golf course, moved the following resolution :- “That the golf club committee be empowered to take steps for obtaining the requisite subscriptions for shares, and if successful that a provisional agreement for a lease of the Dollar Banks as a golf course, and Brewlands House as a clubhouse, be conclude with the proprietor of Harviestoun and Castle Campbell to be taken over by a limited liability company to be thereafter constituted, it being understood that the expenses of doing so form a charge against the company.”

Dr Strachan, who seconded the proposal, said he did so with a feeling of the benefits to be conferred on Dollar by this movement, and he hoped all would go into it heartily. The motion was unanimously adopted.

A vote of thanks to the chairman, on the proposal of Mr J.B. Wyles, closed the proceedings.

The golf club took a new lease of life on Thursday last when it formally entered upon possession, and held its first meeting in its new premises at Brewlands. There was a large accession of new members, and it was resolved to exempt them, and all joining within a certain date, from payment of the entrance fee. The green committee reported that matters were proceeding briskly with the greens under the able supervision of Dickson, and that the contractor’s ( Laurie ) men were making excellent headway with the clearing of the course. It is anticipated that play will be practicable about the middle of June. The following office bearers were appointed :- Captain, Mr C.S. Dougall, Vice Captain, Mr J.A. Gibson, Hon. Secretary, Mr J.B. Wyles, Hon. Treasurer, Mr D. MacBeth, Committee, Mr Cruikshanks, Mr Fleming, Col. Haig, Mr J.S. Henderson, Mr J. Ernest Kerr, Mr Kinloch, Mr Lauder, Mr J. Smith, and Dr Spence. 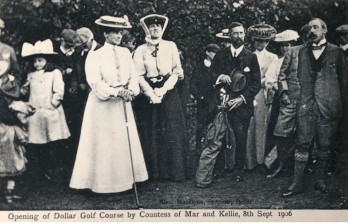 The New Course at Dollar

Dollar has now got its golf course, which was formally opened on Saturday by the Countess of Mar and Kellie with due pomp and circumstance.  The course lies to the north of the town, and is easily accessible.  It is about three miles in length, and extends from the Glen on the one hand to the Quarrel Wood on the other.  B.Sayers, of North Berwick, was consulted regarding the laying out of the course, and under his guidance full advantage has been taken of the natural difficulties which abound.  Each hole has its peculiarities, and there is no crossing at any point.  A small stream runs through the course, and forms an excellent hazard at several places, and the player who wishes to keep down his score must drive a straight ball and pitch with accuracy, for there is no running up to any of the greens.  Golfers who are not too much engrossed in their game will be struck with the beautiful prospects which are to be had from the course.  Below lie the policies of MacNabb, and beyond may be seen the valley of the Devon and the wooded slopes of Sheardale and Dollarbeg.  The originators of the movement for the construction of the course were fortunate in finding a house close at hand, which, with few alterations, has been converted into a club-house, and the scale of charges, either for the visitor or the residenter, is reasonable. 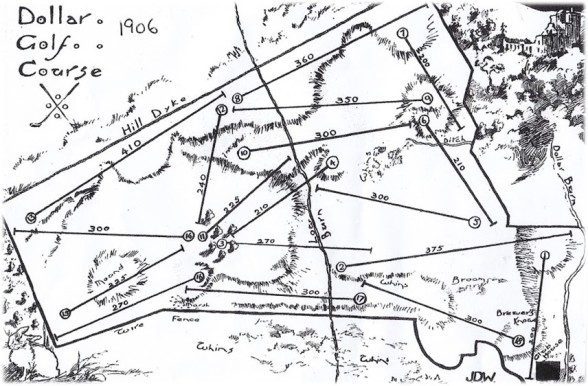 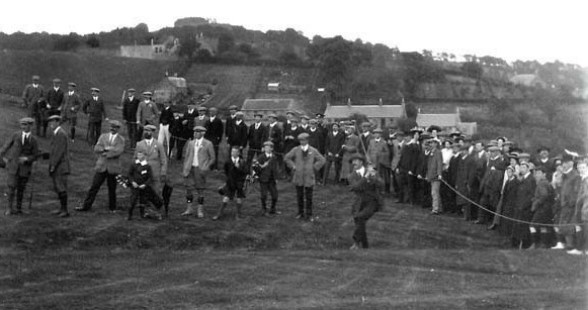 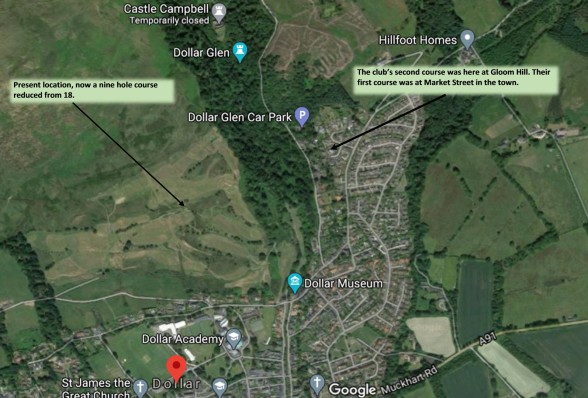