The golf club and course were set up primarily at the instigation of golfers in Perth to allow relaxed play when the North Inch became too congested in the Summer months when it was opened to cricket. Later, the opening of the King James VI club’s course on Moncrieffe Island, was the beginning of the end of the Bridge of Earn club.

Bridge of Earn Golf Club.  Founded 1894. A 9-hole course is five minutes from the station. 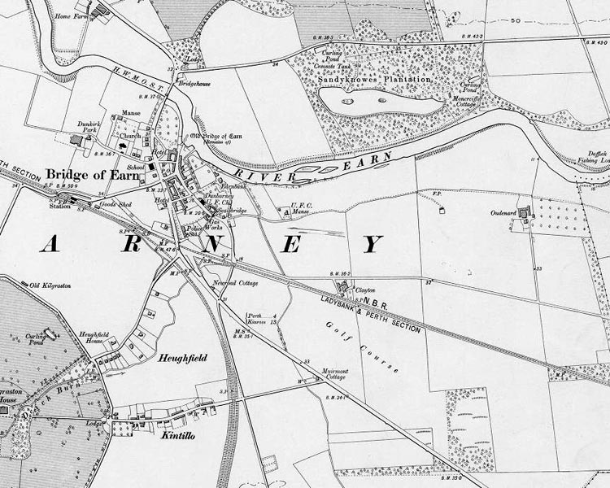 "An important addition is about to be made to the amenities of Bridge of Earn in the shape of a golf course. A committee of local gentlemen have just completed arrangements with the tenant of Clayton Farm on the Kilgraston Estate, by which three large fields have been placed at their disposal for the formation of a course. The ground lies between the Fife section of the North British Railway and the Edinburgh road, and the teeing ground is within three minutes walk of the Railway Station.

Most of the land was reclaimed from the moor about 50 years ago, and has for many years been used for grazing purposes. The tuf is short and fine, and is eminently fitted for a golf course, The extent is about 60 acres, and in this it is proposed to lay down a course of nine holes. Hazards are numerous, the ground being intercepted by a smallburn, a dry ditch, and several banks of rising ground. A convenient clubhouse has been provided, and it is expected the course will be opened by the middle of June."

"The good folks of the Bridge of Earn have had the proposal to add a golf course to their many other amenities under consideration for some time, and on Friday evening a public meeting was called to talk over the subject. Mr C.L Wood of Freeland, presided, and there was a good attendance. The chairman said that the neighboring proprietors and he would be glad to give the proposal their heartiest support.

Mr Brough stated that Mr Walker, the tenant of Clayton Farm, had offered to give off 60 acres of his holding at a rent of £22.10s a year. He has six years to run, but declined to give any lease. Messrs Taylor had estimated that to lay out the course, re-turf two greens entirely, re-lay seven greens, clear the grass right through with a horse machine, and erect two bridges over the burn would cost £78. Mr Keay, City Chamberlain, and Mr Dow, Deputy Town Clerk, pointed out that golf could not be played in Perth during the summer, and they had no doubt that the green would be largely taken advantage of by golfers from the fair city.

On the motion of the Rev. Mr Clark, seconded by Mr Ayre, chemist, Perth, it was unanimously agreed to form a club, to be called, “ The Bridge of Earn Golf Club”

The following committee was appointed to report and advise as to the making of the ground, the cost, mode of upkeep, annual expense and tenure ;- R. Wallace, Perth; Brough, Clark and Ellis, Bridge of Earn. Mr Brough was appointed interim secretary and treasurer.

A vote of thanks to the chairman brought the proceedings to a close."

"On Wednesday afternoon a large and fashionable company assembled at the Bridge of has been laid out on the farm of Oudenarde by Messrs R & D Taylor, contractors, Perth. Sir Robert Moncreiffe, Bart, in opening the course, said – Bridge of Earn had hitherto been pretty well up in games, but that day, in consequence of them starting the noble game of golf, was a red letter day. (Applause) He hoped that the opening of the course would do good to the village.

Hitherto the attempts to accomplish the object they had attained that day had been futile, but, thanks to Mr Walker, the tenant of the land on which they stood, they had been able to make arrangements agreeable to all concerned. They all trusted that when Mr Grant came back and took the farm into his own hands they would be able to make as good arrangements with him as they had done with Mr Walker. (Applause).

He was sure that Mr Grant had thoroughly at heart the interests of the village, and would do all he could to help on any good movement. Without saying anything further, he would call upon Lady Moncreiff to drive off the first ball. (Loud Applause)

Amid loud cheers, her Ladyship took hold of the driver and sent the “ Gutty” spinning merrily along.

Mr Ellis, in moving a hearty vote of thanks to Sir Robert and Lady Moncreiff, said if it had not been for them the golf course would not have been an accomplished fact that day (Applause)

In acknowledging the compliment Sir Robert said it gave him great pleasure to do everything he could to further the interests of the village ( Applause ).

At the conclusion of the ceremony a number of games was played. Sir Robert and Lord Hay led off with two beautiful drives, and they did the round in 45 and 46 respectively. The best score of the afternoon was made by Mr Dan Cuthbert, it being one less than Sir Robert’s.

The district in which the golf course is situated is one of the most beautiful in Perthshire, close to the famous Wicks of Baiglie and Wells of Pitkeathly.

The ground secured is admirably suited for golf, and while in the first instance only a nine hole course has been laid out, still there is ample room to extend it to the full length. There are the usual hazards of burns and bunkers in plenty, and with the amount of play that is likely to be upon it, the course promises to an excellent one.

The green at present is a little long ; but it will not be long before it is pretty well tramped down.

A suitable house has been secured close at hand as a club house, and with a start of over a hundred members , the Bridge of Earn Golf Club may be said to make an auspicious opening.Mr Robert Brough, Ochil View, has acted as secretary, and has done a vast amount of work in connection with the undertaking. The committee have been ably assisted in their work by the generous help of Sir Robert Moncrieff and Mr C.L. Wood of Freeland.

"A great many Perth People are members of the club. It should be mentioned that the holes on the greens are fitted with Mr Alberts E Pullar’s patent, a gift to the club.This consists of a simple, yet ingenious contrivance, a plate being fixed inside on Pivets, balanced to one side, so that when a ball is played into the hole, the player is not required to stoop to take out the ball, but by a smart knock with the flagstick on the plate, the ball springs on to the green. The players were all delighted with this new invention, and it has only to be brought under the notice of golfers to be appreciated."

"The first of a series of monthly competitions was played off on Saturday entitling the winner to play in the final at the end of twelve months for a handsome trophy, presented by the club, and to become the property of the winner. Four other prizes were presented by the following gentlemen ; 1, Patent, ( Anderons ) driving club, by Mr R.A. Hay, George St Perth ; Half Dozen balls by Mr Begg, Monifieth ; 1 lb of tobacco, by Mr Laing, St John Street, Perth ; and a pipe by Dr J. Begbie Laing.

"A special meeting of the golf club was held in Saturday evening in the school to make arrangements for the ensuing season. It was decided to continue the struggle for another year and to alter the course whereby a saving of £10 per annum will be affected.

The club is greatly reduced in number since the opening of the course on Moncreiff Island."   (PA 3.5.1899)

“For an inland course, the ground is good,and between natural and artificial hazards is not an easy one.  The holes vary in length from 180 to over 400 yards.  There is a convenient Clubhouse beside the course where tea and other refreshments can be had.”

“One of the reasons the club was formed was that it provided a course for Perth Golfers when the North Inch went over to Cricket in the Summer months. When the King James VI Club opened its own course on Moncreieffe Island, the fortunes of Bridge of Earn gradually diminished, and the club was neglected.”