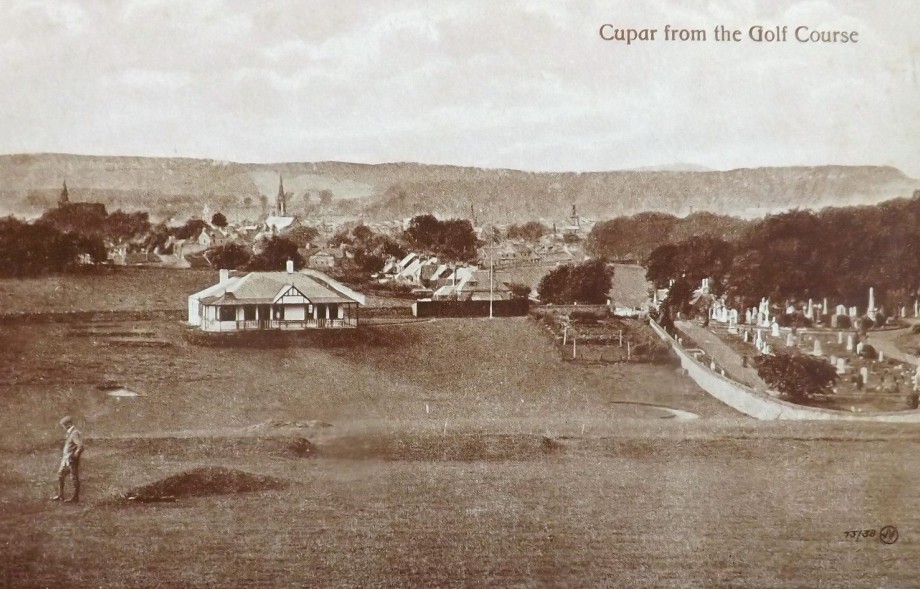 1st course at Tailabout Farm from 1855 to 1876. They then played at Ladybank until 1896 when they amalgamated with the Hilltarvit golf club.

The course, nine holes, is over Ladybank Links, half a mile from Ladybank Station. The green is kept up by the Ladybank Golf Club, to whom the Cupar Club pays a yearly rent. There is no club house.

Club Prizes. Two Medals, and a variety of other prizes were played for at the monthly competitions.

The Lowest Scratch Score in a club competition is 90, made by P. C. Walker on June 2nd, 1887. The green is situated at Bonvil Park, Cupar. 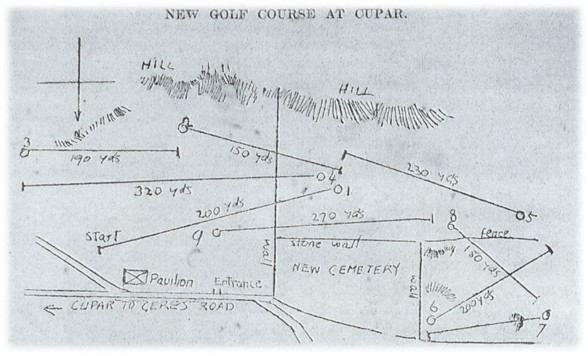 The above is a plan of the newly-laid course at Cupar. Some half-a-dozen years ago a club was started at Cupar under the name of the Hilltarvit Golf Club, and the ground was on three fields on the farm of Hilltarvit. The course comprised nine-holes, but the amount of hilly country traversed, and the fact that the grass was luxurious, requiring more attention than there were funds for, at length brought the affairs of this club to a standstill. The old established “ Cupar Golf Club” had been in the habit for several years of playing at Ladybank, sharing the course there with the local club ; but dissatisfaction was expressed, and last week the Cupar club and the Hilltarvit club amalgamated. The result of their conjoint deliberations has been the preparing of a practically new course at Hilltarvit, the feature of which is that all the holes are confined to the low lying parts of the fields, and thus good play is likely to be more common than formerly. Much has yet to be done in the way of keeping the course well cut, but in time there is no doubt that it will prove popular. Already there is a promise of eighty members. The first hole starts at the Ceres road. The long hole is 320 yards in length. Par play for the round of nine holes should be 40. Only two or three of the greens exist which the Hilltarvit club levelled and rolled, but the pavilion erected by the now defunct club, containing boxes, &c., will come in as an excellent legacy to the amalgamated club.