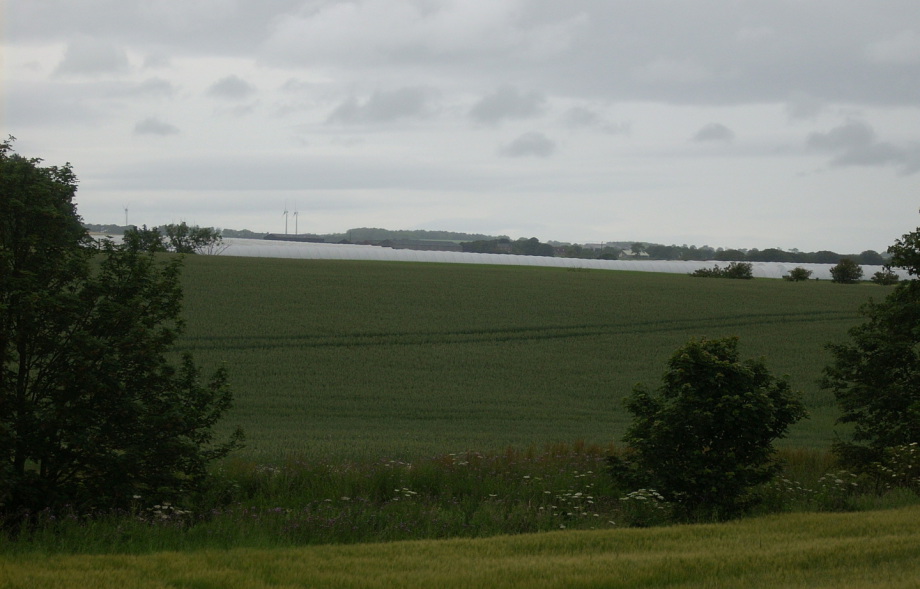 The East Of Fife, Grangemuir, course with Dreel Burn in the foreground.

East of Fife Golf Club.  Instituted 1889.  A 6-hole course on the Myres at Grangemuir, 5 minutes walk from Pittenweem station.

“The weekly competition for the deer’s head presented to the East of Fife club, play for which has been interrupted of late because of the stormy state of the weather, was resumed on Saturday afternoon. The weather was fine but the turnout small. The contest resulted in a tie between Messrs G Williamson and D Laurie, each having a scratch score of 82. (GH 11.11.1893)

"At a meeting of this club on Friday, Provost Gilchrist was appointed Captain; Ex Provost Anderson, Vice Captain; Mr W. Russell, Secretary, and Mr Gunn, Treasurer. A committee of six was elected. The committee and officials were authorised to draw up rules, and to have the agreements between the tenants and proprietors of the land signed for a lease of five years at least. The membership numbers fully sixty." (FA 16.8.1889)

"A match between the East Of Fife Golf Club (Grangemuir) and that of the East Neuk of Fife (Crail) took place on the course of the former on Saturday evening. The condition of both weather and green was all that could be wished for, while a large number of spectators  were drawn thither to watch the result. In the absence of Provost Gilchrist, the Captain of the Grangemuir club, through indisposition, Mr Gunn, of H.M. Ecise, the treasurer, superintended the arrangements. Twelve members a side took part in the contest, the conditions being three rounds of the course of 18 holes. From the start, and as the match proceeded, it was considered from the superior driving of the Crail team, gained no doubt from much practice, than their opponents that at the end they would come in easy winners. In spite of the many hazards of both of “ Flood and Field” with which the course abounds, the strangers with due caution kept wonderfully clear of these, whereas several of the home team – and the “ Crack” of them, too – notwithstanding their almost daily experience, fell victims to them, to the great advantage of their opponents. The match ended in favour of the visitors by 28 holes to 18 for Crail. At the close Mr Gunn intimated the result, and called for three cheers for the winners, which were heartily given. An adjournment was then made to Commercial Hotel, Pittenweem (Mr Blyth’s), where the visitors were hospitably entertained by their opponents, the former expressing their high approbation of the whole arrangements made on their behalf, and there being favourably impressed with the Grangemuir course. The return match was fixed to take place at Crail about the end of July." (FA 15.10.1889)

"A return match between the East Of Fife Club, and that of the East Neuk Of Fife,Crail, took place on the course of the latter on Saturday evening. The teams consisted of 12 men a side, with two rounds of 18 holes. The weather was pretty favourable at the start, but slightly showery towards the end, but the unkept condition of the course, being overrun with long grass, made it very unfavourable for good play, more especially for the strangers, to all of whom the course was entirely new. At the close the home team were winners by 58 holes, against 2 for their opponents – making a total win of 70 holes over the two matches played. At the close, the East of Fife team were hospitably entertained by their opponents at Mr Cotton’s Hotel, where a short time was pleasanly spent before the homeward journey was made." 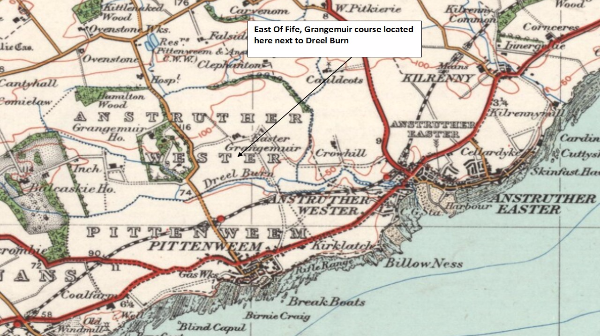 "The monthly silver medal was played for on the Grangemuir course on Saturday afternoon. The weather was fine, and induced a number of competitors to turn out.