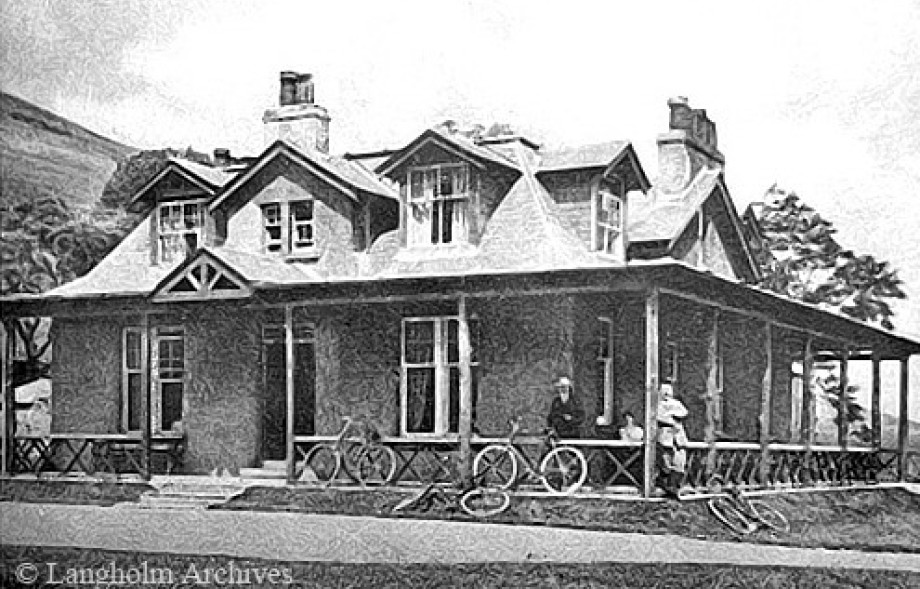 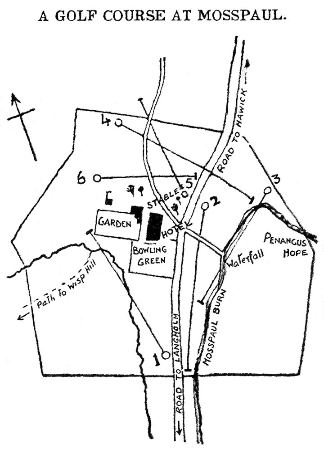 “This is a sketch of the new golf course which has been laid out at Mosspaul, about twelve miles from Hawick – where the inn of coaching day fame was resuscitated in July last –, and will be formally opened on he 15th September. As shown on the plan, the first tee is near the hotel garden wall, with a burn on the right, which will be a terror to players who foozle their drive; but with a good drive, an easy iron shot should find the green. The second tee is across the road, at the side of the Mosspaul Burn, and a couple of good strokes should again take the golfer to the green. Here again the burn will require careful play. The third green should be reached with a drive, but both burns will require to e carried, otherwise the golfer’s temper will be tried. The fourth hole is the longest of the six-hole course, and there are such hazards as a hedge, a road, dyke, and burn to be negotiated. The fifth and sixth holes should easily enough be managed, but the burn has to be crossed in each case. Although a short course, it should prove a very sporting one, and the turf is good.: (EED 10.9.1900)

"A new six hole course which has been laid out on the grounds around Mosspaul, about twelve miles from Hawick – where the inn of coaching day fame was resuscitated in July last – was formally opened on Saturday afternoon. The course is a very sporting one, there being numerous hazards in the shape of burns,dykes and hedges.

At the opening ceremony, Mr J.S.Turner, Hawick, presided, and after intimating an apology for absence from the Earl of Dalkeith, M.P. stated that they had secured for the opening Mr Walter Rutherford, crailing tofts, the border champion, the hero of a hundred fights, one well known in golfing circles, and highly respected as a golfer. (Applause).

Mr Rutherford said that, as one of the oldest golfers in the district, he had great pleasure in being present. He had been at the opening of a great many golf courses, and each one added freshness to those who were old players, and who stuck to the game when there were few to support it. Until now it had spread all over the country. (Applause) They were not the first golfers, however, who had visited Mosspaul. On referring to history they found a note of a visit of the Rev. Dr Carlyle “ Jupiter Carlyle “ in 1767 to Mosspaul. He was a great golfer , although at that time the game, he had no doubt, had not the hold on the country which it had now. Such a course here should prove extremely popular. It was almost impossible to get played on the courses at popular resorts because of the large numbers, and if the Mosspaul course were improved a little, and probably extended to a nine hole course, it should become another Machrihanish, and become a great summer resort. (Applause). The great difficulty now was to get played comfortably on a course, and where they were so crowded, instead of pleasure it became a positive pain. The struggle for existence in the border towns and elsewhere was great, and at times they were anxious to get away from the madding crowd, and they could find no more attractive spot than here among the hills. (Applause)