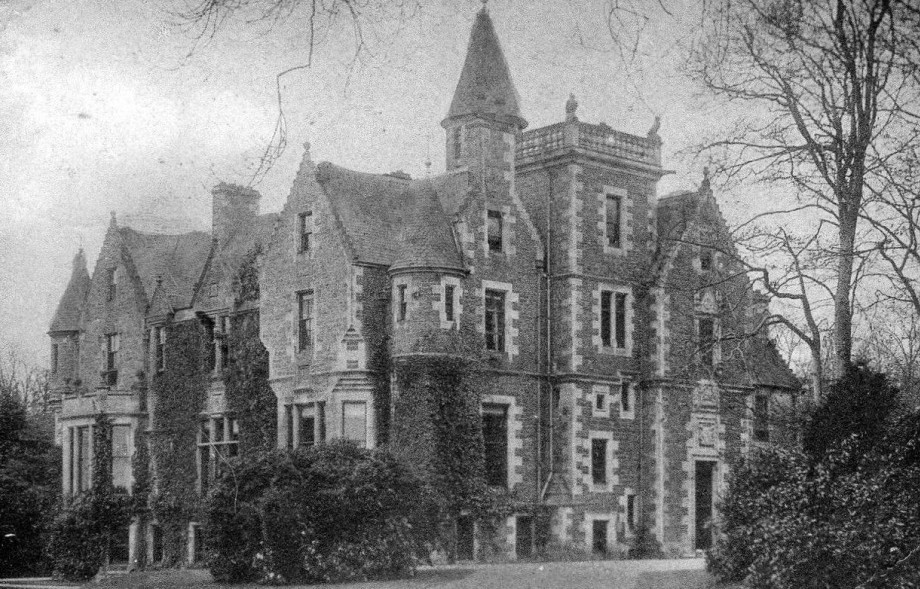 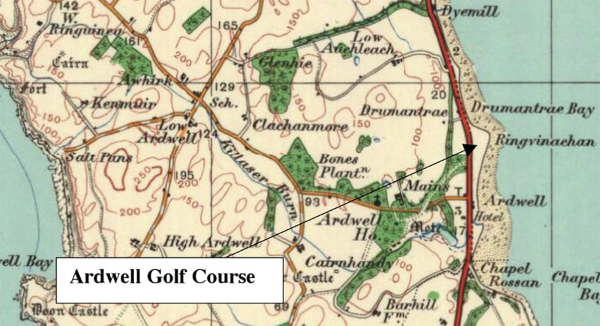 “This young club is in a very flourishing condition. The links are situated 10 miles from Stranraer, near to the residence of Sir Mark Stewart, Bart, MP. The competitions for various prizes, presented by a few members, was in progress during the past week, and concluded on Saturday evening. The greens are in good order. During the week, an interesting game was played between Mr John Shaw, of the Troon club, and the Rev M Marshall, the former winning, doing the round in 80, and establishing a new record.”   (Glasgow Herald   1893)

“The game of golf, which has taken so firm a hold of Scotland recently, has at last invaded Wigtownshire. A small golf course has been formed at Ardwell, and the autumn competition in connection with the club takes place on Thursday.

Determined efforts are being made by a number of Stranraer residents to secure links on a larger scale at the head of Luce Bay. A course in this situation would be available to the whole of Wigtownshire and no doubt, if the ground can be obtained, a strong club might be formed.

In the meantime, the Laird of Dunragit, is the only remaining individual whose consent has to be obtained, and it is expected to be forthcoming before Wednesday, for which day a meeting of all interested has been called. The project was set going by the upholder of “ Auld Kirk” interests in Leswait, but there is nothing incompatible in the wearer of a black coat wielding a golf club. The Rev. gentleman in question is as much at home on the links, the bowling green, or the pulpit."   (Belfast Newsletter 1.8.1893) 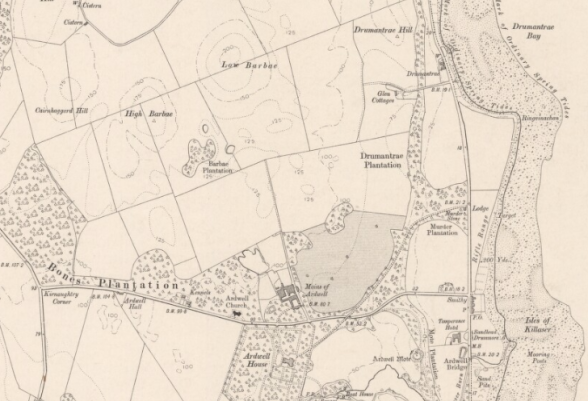 “The players engaged in the golf tournament at Ardwell yesterday were mostly novices, and their efforts gave rise to considerable amusement. They included, however, a few proficients like Mr James McDonall, of Logan, Mr D A McClew, Chapelrossan, and Chief Constable B S Cunliffe, who wielded their clubs gracefully and to some purpose. The scores were discreetly suppressed.”

"Ardwell golf club autumn competition for scratch medal was held on Thursday of last week. There were fourteen entries. All the members of the club who had played previous to this season abstained from playing. The successful competitor was Mr David A. McClew of Chapel Rossan, the runner up beingMr David Scott."    (Galloway Gazette 12.8.1893)

"As an indication how rapidly “ ye royal ancient game” catches the rustic taste, I may mention that the club at Ardwell, a small village some twelve miles South of Stranraer, with no railway connection, has a membership of over thirty, comprising farmers, ploughmen, gentlemen, local ministers and doctors and others residing in the vicinity. The new club ought to get a membership of at least a hundred"

On the 24th March a foursome match for two prizes took place, and these were won by Mr James Blackwell and Mr James Cain. On the 7th inst., in a foursome competition the prizes were won by Mr G. Cowan and Mr R.T. Marshall."      (Galloway Gazette 21.4.1894)

“The monthly competition for a medal presented by Sir Mark Stewart, Bart, MP, took place at Ardwell on Wednesday. The medal was won by Mr Cain, Chapekrossan, who had a net score of 95.” (Golfers Handbook 9.1894)

"The members of Ardwell golf club held the monthly competition for the handicap medal on Wednesday of last week, and it was won by Mr A. Henry Jnr., Ardwell Stores."

“The course, of six holes, although small, is very sporting and the turf s good. Dunvagit is distant nine miles, and Stranraer eleven. A bus runs twice a day to and from Stranraer. There is not much accommodation for visitors.”