It was unanimously resolved that the name of the Club should be the “Crail Thistle Golf Club”, and the laws of the Crail Golfing Society having been considered, these with slight alterations were adopted as the Laws of the Club

The Secretary was directed to write a note of thanks to Mr Duncan for his gift and it was agreed to have the following inscription engraved on the cross – on the one side “The Duncan Cross”, and on the other “Crail Thistle Golf Club 1880.” It was also agreed to play for the Cross fortnightly from the last Saturday of March (the day after the Annual Meeting) till the last Saturday of October inclusive, over two rounds of the Sauchope Links.

Mr Bolland gave three balls to be competed for on Saturday 24th April two to go to the winner of the Cross, and one to the second best. Mr Mathewson gave the Club a Minute Book and Treasurers Book and Mr Lillee gave each member present a copy of the Laws of Crail Golfing Society.” (extracted from the Club Minutes.)

Administrative matters are covered until the final recorded minutes, those of the meeting held on 30th August 1887. There is no indication of how long after this the club existed, or why it closed, but as it is not mentioned as a user of the links when they were extended to 18 holes in 1890, it can reasonably be assumed that it closed between 1887 and 1890. 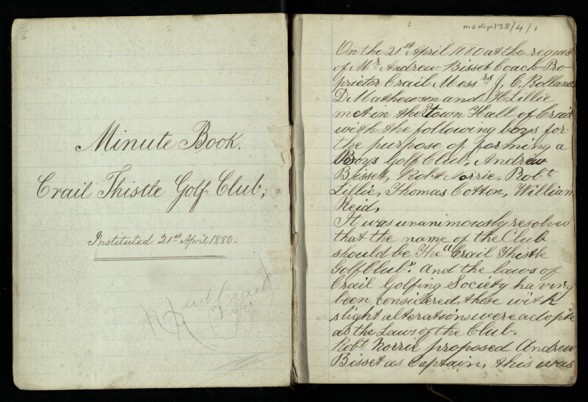