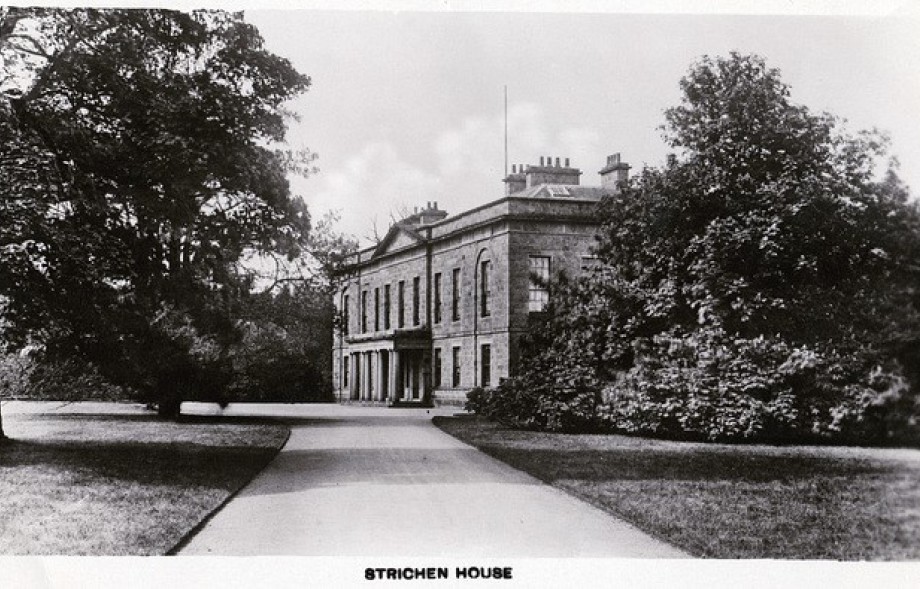 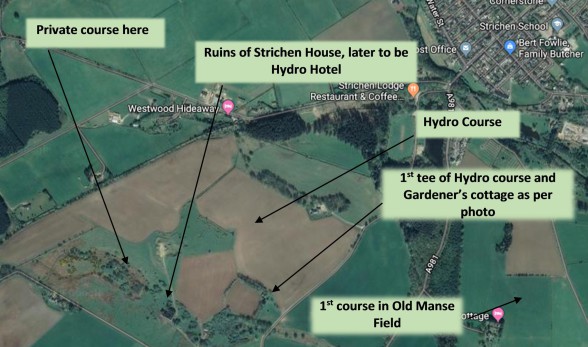 "The Strichen trustee’s have formed a six hole golf course in the large park at Strichen house for the use of Mr Michell, the lessee of the shootings, and his guests.Mr Michell is a great enthusiast in the Royal and Ancient game, and arrives for the shooting season in the course of this week. Mr McLean, head keeper, superintended the making of the course." 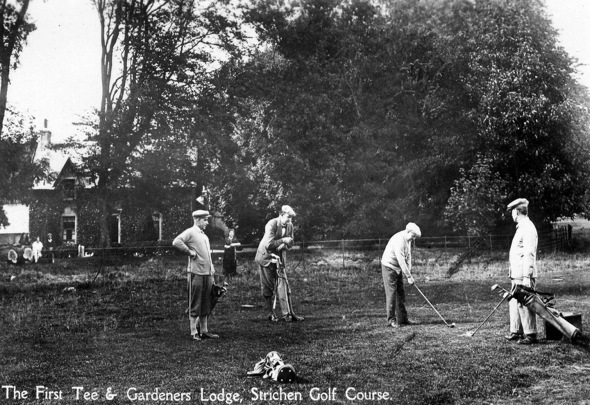 The above photo is the first tee of the later Hydro course in the 1920s.

The cottage is still standing although it is in a ruined state as is the Main house and gardens etc.

Field to be Acquired

"A meeting of those interested in the formation of a golf course at Strichen was held in the town hall on Monday evening. Mr Young was called to the chair, and there was a representative attendance. Mr Alexander said as a course they had in view the old Manse Park, which they considered quite suitable for the purpose.

The Rev. W.L.B. Petrie moved, and Mr J.M. Cook seconded, that a small committee be appointed to approach Mr Sleigh to see if the field could be obtained and on what terms, to go into details as to probable expense, and report to a future meeting. A committee was accordingly appointed as follows – Messrs Young, Alexander, Penny, Attwood, and Dr Stephen"

"A public meeting of those interested in the formation of a golf club in Strichen was held in the town hall on Friday evening. Mr George Young, Bank House, presided over an enthusiastic gathering of ladies and gentlemen. The chairman said the committee appointed at the last meeting were now in a position to report progress, and called upon Mr R. Alexander to read a statement of what had been done.

Mr Alexander read a letter from Mr Theodore Lumley, the commissioner for the Strichen trustees setting forth the terms upon which a field would be granted for playing golf. These were, that the trustees would not disturb the committee of the proposed club for a period of three years, or, if necessary, five years ; that the rental would be £30 a year, the tenants to maintain all the fences ; that the club expend in forming, levelling, and keeping up the links, and greens, what amount Mr Sleigh may think necessary and that the rules and regulations of the club be submitted to Mr Sleigh for his approval.

The report of the committee was to the effect that they considered the conditions laid down by Mr Lumley to be satisfactory, that they had taken the field at £30, and had sub-let it to Mr Chalmers, Ugie Bank, for £15 for sheep grazing, and that they had thought it advisable to get expert advice regarding the arrangements and general plan of the course. Mr Heron, Green-keeper, Fraserburgh, had accordingly been consulted, and that gentleman had submitted what the committee considered an excellent plan for six hole course. Mr Alexander intimated that an anonymous donor had contributed sufficient money to lay down the greens.

The report was unanimously approved by the meeting.

It was agreed that a council of six be confined to gentlemen, and Dr Stephen, The Rev. Mr Petrie, The Rev. Mr Wilson, and Messrs Banks, Sleigh, and Cook were appointed.

On the motion of Mr Petrie, seconded by Mr Sleigh, it was decided that there should be no entrance fee for members. The subscriptions were fixed at 10 s for gentlemen, and 7s 6d for ladies, the charges for visitors to be 1s a day, 2s 6d a week, 3s 6d a fortnight, and 5s a month.

"The new golf course at Strichen was opened yesterday afternoon under most disagreeable weather conditions. A drizzling rain fell most of the day, with the result that the attendance at the opening ceremony was not nearly so large as it would have been under more favourable circumstances.

Mr E.V. Attwood, Vice President of the club, in introducing Mrs Young, said the more enthusiastic golfers in the village had been long desirous of having a course near the village. Thanks mainly to the energies of Mr Alexander, and to the hearty co-operation of all interested in the game in Strichen, their dream was about to be realised. He had very much pleasure in calling upon Mrs Young, the wife of their President, who was unavoidably absent, to declare the course open.

Mrs Young, in a very few words, expressed her pleasure in being present, and in declaring the course open for play, Mrs Young then played off the first ball amid applause.

Mr C.W. Sleigh, on behalf of the members of the golf club, proposed a vote of thanks to Mrs Young for her kindness and stated it had been their intention to give Mrs Young a small gift which would be useful to her and would also serve to remind her of that occasion. The article had not arrived in time, but when it did, it would be sent to Mrs Young with the most hearty good wishes of the golf club. The vote of thanks was warmly accorded. The company were thereafter served with tea, after which a number of foursomes were engaged in by several of the ladies and gentlemen" 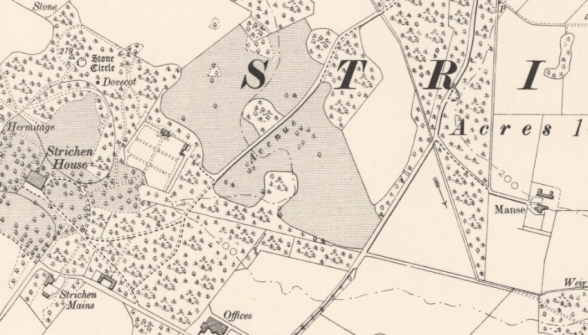 The annual general meeting of the members of the Strichen golf club was held on Tuesday – Mr C.W. Sleigh, President, in the chair. The balance sheet for the past year, as submitted by Mr Alexander, Treasurer, showed a credit balance of over £6, which was considered very satisfactory in view of the fact that there was a decrease in membership of 17.

Mr Sliegh was thanked for the cup he had presented for competition, which had been very successful in stimulating the enthusiasm of the members. One of the members offered a prize for competition among ladies. The hope was expressed that a sufficient number of the lady members would come forward to enable the prize to be played for this year."

The annual general meeting of the members of the Strichen golf club was held in the town hall on Thursday evening. Mr J.A. Bnks presided. The secretary, Mr McKilligin, submitted the accounts for the past year, showing the club to be in a sound position financially.

It was decided that members subsciptions remain as they were last year. A small committee consisting of Messrs Young, Atwood, and John Shand was appointed to go into the question of providing some sort of shelter for the members on the golf course."

With the exception of about 35 farms and crofts, the agricultural holdings on the estate of Strichen have been purchased privately from Mr E.C. Fairweather by the sitting tenants in almost every case. It is understood that the terms of purchase have been very favourable to the tenants, who, in many cases, frankly stated that they considered they have got bargains. The unsold holdings and a number of village lots are to be exposed to public sale on October 26th, in the Strichen Public Hall.

Included among the latest transactions in the sale, as a whole, of the estate of Auchmedden. The purchaser’s name has not been made public. The estate extends to about 6000 acres and has a rental of £2164. A considerable part of the Orrok estate has been purchased from Mr Fairweather by Captain Lumsden of Balmedie.

A matter of great moment to the villagers is the future of Strichen House, and it will, therefore, be of interest to them as well as the public generally to learn that negotiations are in progress for the purchase of the house and polices by a syndicate, and that it is the intention of the syndicate to convert the house into an hotel and lay out a golf course within the polices. Strichen is a lovely spot, with a salubrious climate, and the manor house and its polices are ideally situated for a hydro hotel. The project will be welcomed by the villagers, who stand to benefit materially from it.

Strichen House stands about a mile from the village of Strichen, amidst sylvan surroundings. It was built in 1821 by Lord Lovat. The architecture is of Grecian style with a portico in front, with flutted doric pillars. The grounds were laid out by Mr Gilpin, in his day one of the best known English landscape gardeners. Within the polices there is an artificial lake, about four acres in extent, ornamented with islets on which are trees and rhododendron bushes. Near the house are the remains of a druidical circle and also the private six hole golf course, belonging to the former owner, Mr Mitchell.

Mr Joseph Bisset, Butcher, Strichen,bought the lotted lands extending to 9.274 acres, and the old manse field, 15.256 acres, the joint rental of which is £46, the golf club being tenants for £600. 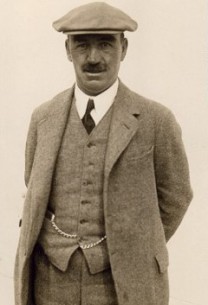 A commencement with play on the new golf course at Strichen House was made, when, in spite of unfavourable weather conditions, there was a large company of those interested in the game. Mr C.W. Sliegh, in the absence of the President, read a telegram from Colonel Adamson, wishing the members of the golf club every possible success and a happy commencement.

Mr R. Alexander, the secretary, was instructed to convey the thanks of the company to Colonel Adamson, and to wish him a speedy recovery to complete health. Mr David Ewing, who has been forester on the Strichen estate for the past fifty years was called upon by Mr Sliegh to play the first ball, and the members thereafter had a round.

At present the course, is being laid out to plans by Dr Mackenzie, Leeds, ( Photo ) and extends to eight holes, but, when completed, will run to the full 18 holes. The work has been proceeding for some weeks past, and it is said that when finished the course will be one of the finest inland courses in the North Of Scotland. Some would even leave out the description the words “ Inland” and “ North.” 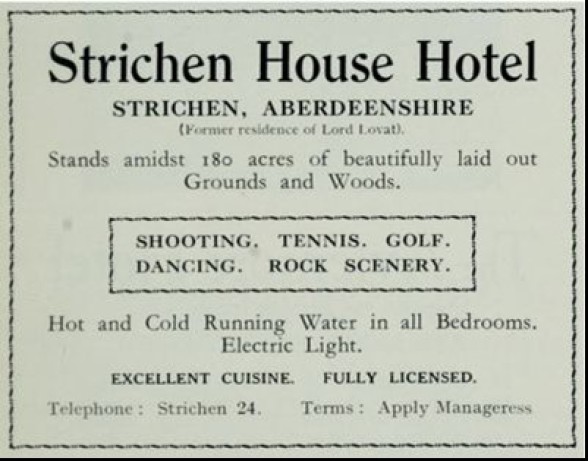 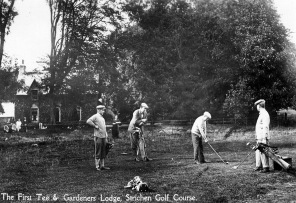 A stroke competition over eighteen holes was played on the Strichen Hydro Golf Course. Owing to the frozen condition of the ground play was erratic. The results were :- 1, H.D. Scott, 2, C. Bremner. 3, C. Low. The misty prize was won by James R. Robertson."

A stroke competition over eighteen holes was played on the Strichen Hydro Golf Course. Owing to the frozen condition of the ground play was erratic. The results were :- 1, H.D. Scott, 2, C. Bremner. 3, C. Low. The misty prize was won by James R. Robertson." 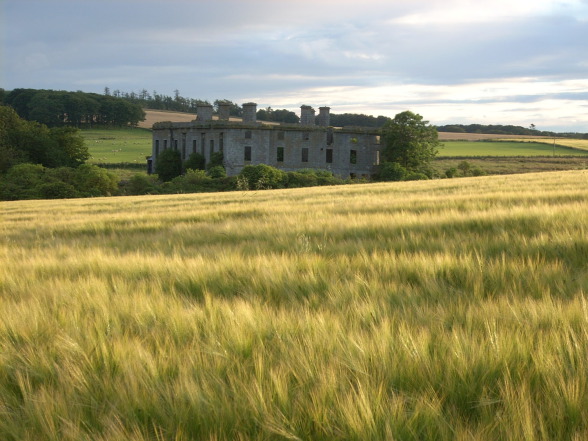 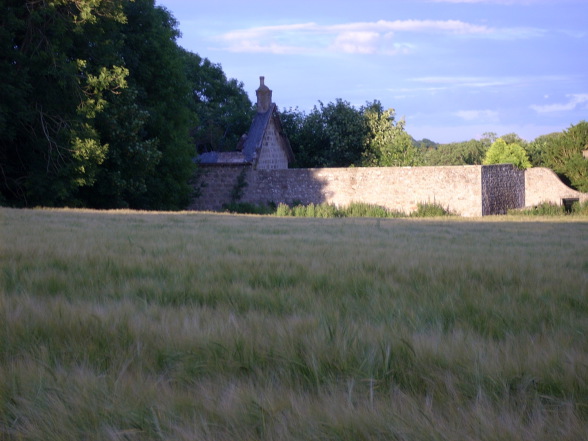