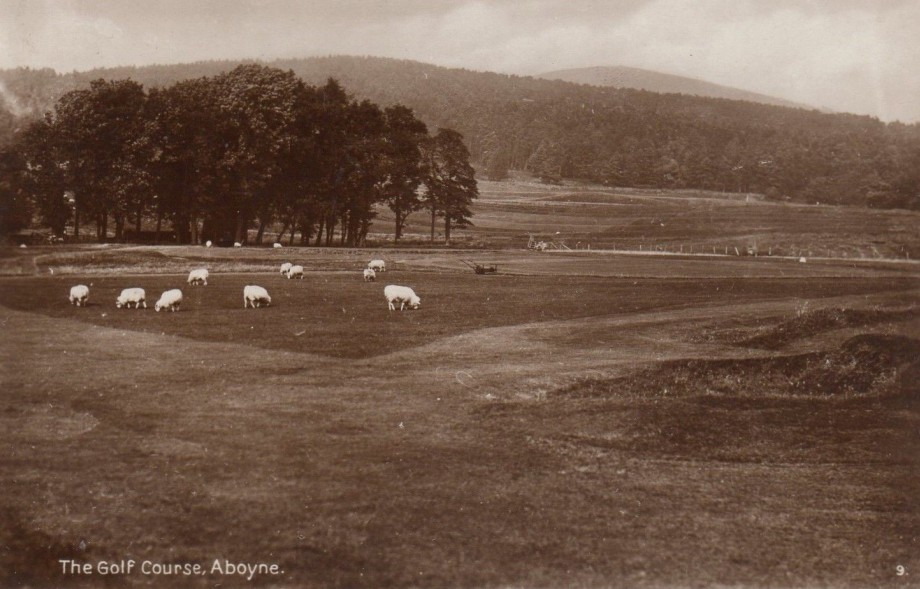 Although Aboyne is an existing club ( And not defunct ) i felt that since the club's formation was 1874 or earlier, then it should be included for its first course on the green, however, more information can be found on Aboyne in our forgotten greens of existing club section.

Aboyne Golf Course.  “The 19th Century local economy was supported by landowners and gentry, who, in pursuit of a fashionable pastime introduced golf to Aboyne in 1874. Although details are vague it is known that play took place over nine holes laid out on the village greens, with Sir Alexander Lyon, Lord Provost of Aberdeen, a regular sight in his Royal Aberdeen Golf Club red reefer jacket.” (Aboyne Club History) Present club was formed in 1883.

A meeting of the Aboyne golf club was held within the Huntly Arms Hotel on Tuesday evening, under the Presidency of W.E. Nicol, Esq of Bogieshiel, Captain of the club, for the purpose of making up rules. The Rev. C. Dunn, Birse, presented the club with a handsome silver medal, to be competed for monthly. 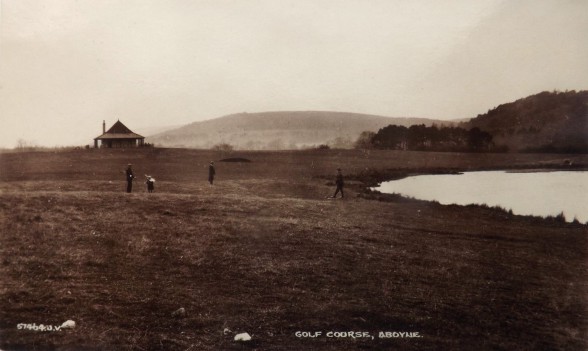 The annual meeting of the Aboyne golf club was held in the Huntly Arms Hotel last night. Mr W.E. Nicol, Captain of the club, occupied the chair, and the other members present were Mr Robert Forgie, Secretary and Treasurer ; Rev. Charles Dunn, Birse ; Dr Keith, Mr Francis Sandison, and Provost Grant. Mr Nicol was re-elected Captain and Mr Forgie, Secretary and Treasurer. The funds of the club were found to be in a highly prosperous state, and as a result it is proposed to improve the putting greens.

Natives of Aboyne V Visitors and presentation to Rev. A. Gray

A match between visitors and natives – eleven players a side – took place on Tuesday evening and resulted in a win for the visitors by 45 to 22. At the close of the match the visitors entertained the native in the Huntly Arms Hotel. Baillie Lyon occupied the chair, and by request of the Aboyne golf club, presented to the Rev. Andrew Gray, a golf cross, to which he had become entitled as having won the greatest number of matches during the past season. 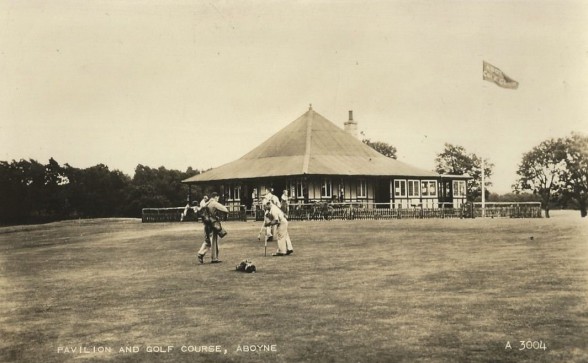 A public meeting was held in the Aboyne public hall on Monday evening to discuss the projected acquisition of the Fernie Brae and Formaston Parks as a new golf links for Aboyne.

There was a large and representative gathering.

Mr A. Grant, Pine Villa, chairman of the golf club, presided, and in a concise manner explained the purpose of the meeting, the attitude of the golf club in relation to the scheme, and the steps which had been taken .He said the day was, when Aboyne rejoiced in being the happy possessor of a golf links on Deeside, but that day, fortunately or unfortunately, was past, and they were now on all sides eclipsed by their neighbours. The green of Aboyne was without doubt one of the principal attractions of the place, but, crowded as it was now with all sorts of games, it was altogether unsuitable for golf.

Mr Ean Cecil of Craigendinnie had, with kndly interest, agreed to lease the Fernie Brae and Formaston Park.

He ( The Chairman ) would say, not only according to the view of the golf club, but also according to the opinion of an expert who had carefully gone over the ground, that a more suitable place could not be found in Aboyne, nor indeed, in the whole of Deeside.

The laying out of the ground would involve a large expenditure, more than the present golf club could cope with single-handed, and they therefore wished to ascertain the feeling of the people of the district regarding the matter. As the success of the plan would depend on the support which the people of Aboyne would extend towards it, they appealed with confidence to them, as this was not a selfish scheme for the benefit of the golf club alone, but one calculated to effect very seriously the interests of the village as a whole.

Mr J. Milne, Shoemaker, Captain of the club, also spoke in support of the scheme.

Mr C. Smith, Postmaster, said surely the public must see how the scheme was to be for their mutual benefit. Aboyne was almost entirely a summer resort. If they failed to attract visitors all classes would suffer. If they were agreed that the scheme should be carried out, he suggested they should straightway proceed to discuss ways and means for its fulfilment. In his opinion, the first essential was the formation of a large and thoroughly representative committee.

Mr Grant stated that several letters had already been received in relation to the scheme, and several people had already given it substantial support by handsome donations.

Rev. Father Thomson said he was not animated by a blind enthusiasm for the game, and therefore any remarks he made should carry greater weight. He endorsed most emphatically the remarks of the previous speakers. He had known personally of people having passed over Aboyne in search of Ballater and other places with better golf links. It was recognised that a good golf course was a source of prosperity to many places. They ought to leave no means untried to attract visitors and to cater for their tastes. He himself was ready to contribute to the scheme, and he had no doubt many other persons would do the same. But it did not follow that he and other contributors were to be members of the golf club, and when the scheme was accomplished he felt that those contributors ought to have a vote in the management of the funds. He had no doubt the present golf club would see the wisdom of that policy. He therefore moved that a committee, to be called the new golf course committee, should be elected, with powers to carry the scheme through.

Mr Shiach, Shoemaker, supported Father Thomson’s motion, and added that it was of the utmost importance that the people of the village should know that they were not merely engaged in the formation of a new golf club, but were forming resolutions regarding the feasibility of a scheme which would be generally beneficial to all. He seconded Father Thomson’s motion as being the first necessary step to put the scheme in working order.

The motion was unanimously adopted.

Mrs Captain Farquhar, Granville Lodge ; Dr Macintosh, Mr A. Henderson, Merchant ; Mr Littlejohn, Builder ; and others asked a few questions calculated to enlighten the meeting as to the expense of the undertaking, and also as to the prospective means for putting it on a sound financial basis. These questions showed, in an informal manner, the unanimous feeling of the meeting was that each one would give the scheme his most practical and cordial support.

A large and thoroughly representative committee was then elected, and out of those was chosen a smaller body to act with discretionary powers as prime movers in the scheme. Mr Grant was appointed chairman and convenor of the committee, and Mr C. Smith, Postmaster, and Mr A.C. Borrowman, accountant, North of Scotland Bank, as joint secretaries.

On the motion of Mr Anderson, Banker, Mr A. Grant. Mr Sandison, Huntly Arms, and the two secretaries were delegated to negotiate the terms of the lease.

The meeting recognising Mr Anderson’s ability in matters of this kind, elected him unanimously as a member of the same delegation. This concluded the business of the meeting. 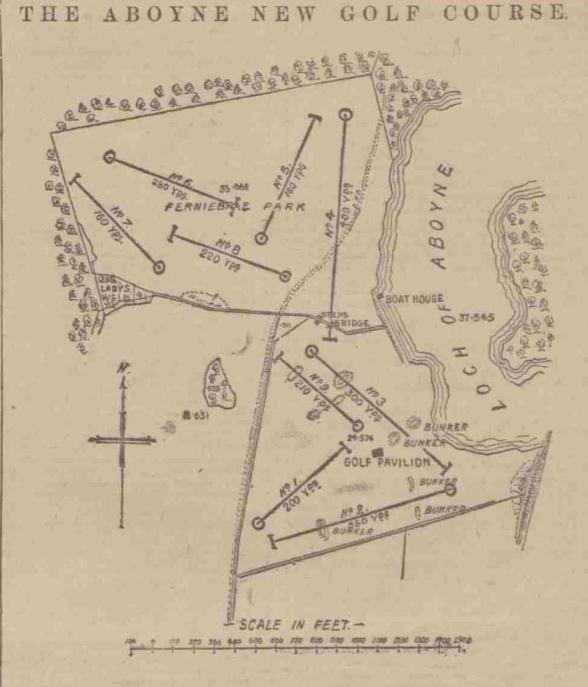