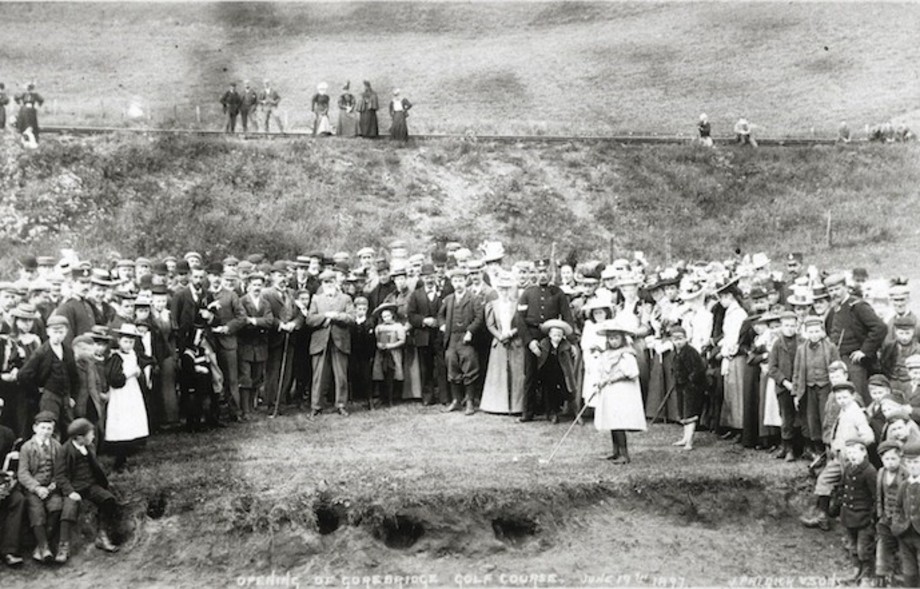 Gorebridge Golf Club.  Founded 1897.  A 9-hole course on Catcune Farm beside the Borthwick Burn, adjacent to Fushiebridge station.  The River Gore intersects the links and has to be crossed six times during the round. The course was laid out by Peter Lees, Greenkeeper to the Royal Burgess Golf Club at Barnton, who also laid out the course at Braid Hills in 1889.

The Gorebridge golf course was at Catcune beside the Borthwick Burn. In the middle distance of the picture people are standing by the old  railway line watching the proceedings. The great and the good of Gorebridge were in attendance at this auspicious occasion. Teeing off is young Eva Inch, daughter of the local GP Dr  Robert Inch.

The Golf Course was on land owned by a local farmer who became tired of  adjacent crops being damaged by local chidren scavenging for lost golf balls, for re-sale to golfers.

The great war in 1914 saw mass conscription and  the golf course closed.  The land was returned to faming operations, the community needing more home grown produce. 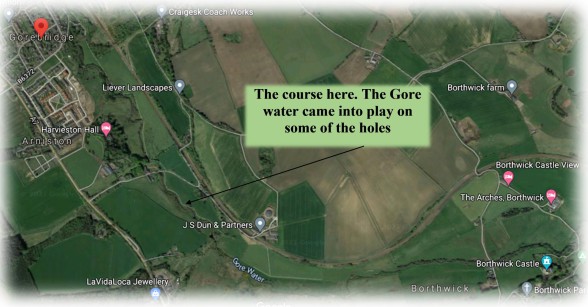 “The first hole will take good play to negotiate. Two obstacles have to be cleared, the burn and a wall about three feet high. The second is a splendid hole, with a grandly situated putting green in a hollow. This will be a double green with the eighth coming home. The third is a short hole, but a very tricky one, as the burn is immediately in front of the green which will be surrounded by whins. The fourth is a pretty long hole, and the burn forms a hazard from the tee until the green is reached. The fifth is the longest hole, and hazards abound in the rushes. The sixth is an easy hole, but the approach has to be nicely judged as the burn is behind the green. The Seventh has the burn immediately in front of the tee, and the eighth, as previously mentioned, shares the green with number two. The ninth is a fine sporting hole. The burn, rightly called the Gore Water runs right up the course all the way, and then a wall has to be crossed.” 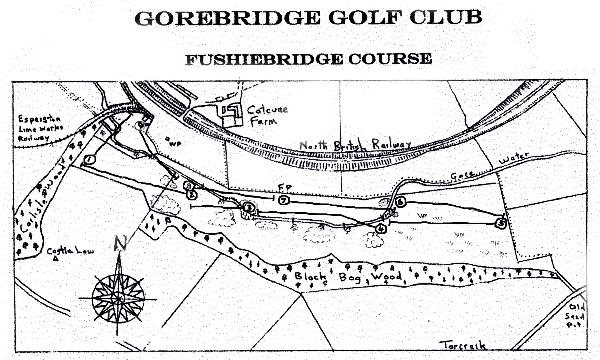 Though only of 9 holes, some are of an exceptionally sporting character and the negotiating of the stream is a matter which calls for some very good golf.  (WWG 1907) 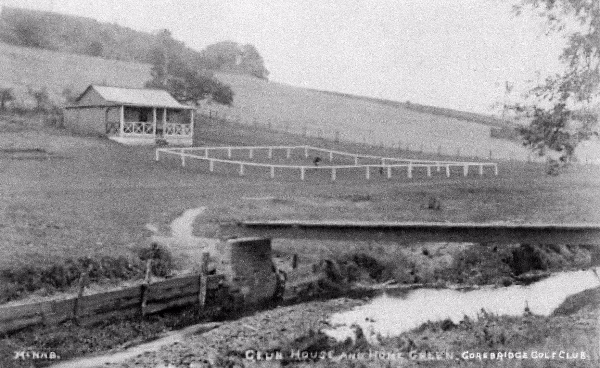 The club closed in 1914 when the land was turned over to agriculture to aid the war effort and never re-opened after WW1 because, it is said, the farmer wanted a much higher rent.  The following item from the Haddington Advertiser might explain why: "Reprehensible Conduct.  Every season considerable damage is done to cereal and other crops in the fields adjoining the golf club through golfers and others wading through them in search of lost golf balls.  This occurs not only during play but Sunday is one of the busiest days of the week.  In spite of repeated warnings this season it is again going on and the matter being now in the hands of the police, it is hoped a conviction or two may put a stop to such reprehensible and destructive conduct."

The Middleton Cup, presented by H E (later Sir Edward) Moss of Middleton, was the championship trophy.  It was last played for in 1914. Many years later it turned up in a second hand shop in Gorebridge and was bought by the son of a former captain and champion.  On his death it was presented to the horticultural society and it is awarded every year to the winnr of the most points in the vegetable section at the flower show.  Membership 90.

We have opening and formation etc. will have to be typed up 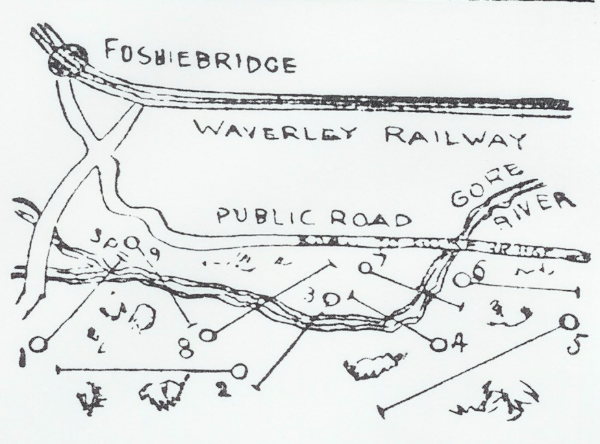