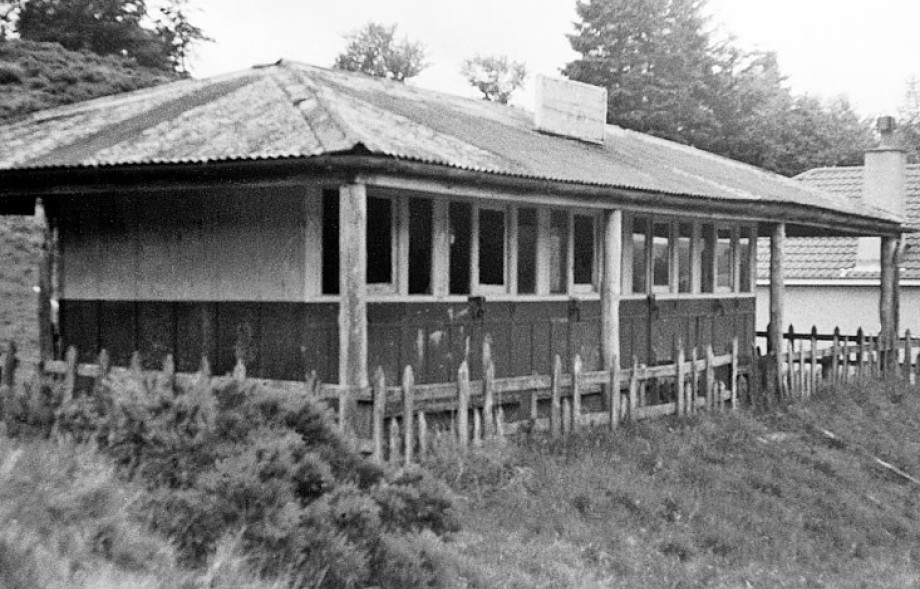 Lumphanan Golf Club. Dr Farquharson gifted a piece of land to the village in 1914 for the construction of a golf course.

The entertainment season is now fast nearing a close, the lengthy day considerably distracting from the latter events of the season.

With the advent of the long day we may hope soon to have our golf course in order, but much yet requires to be done in the removal of brushwood, not to mention the more arduous work of clearing fairways etc

Unfortunately our golf course is not sufficiently advanced to be in playing order this season, but let us hope no time will be lost in getting it put in order.

Dr Farquharson was in our midst in the early part of the week, and further proved his interest in Lumphanan and district by meeting a number of those interested in the promotion of a golf course and kindred objects.

It is very gratifying to note, that at last, there is more than a faint hope that we, like other districts will have a golf course all our own, and a playground for the children, etc.

Dr Farquharson has kindly intimated that the ground will be given at a nominal rental and he has backed this up with a handsome donation to head. With the aforementioned guarantee, the company agreed to form the club.

This was ably supported by those present at the meeting, and a handsome sum was collected but much is yet required.

“ A stout heart to a stay brae” is however the motto of the promoters, and if they are backed up locally, and it is to the interest of the district that it should be so, there is no reason to doubt but that in a short time we shall be having a turn on the greens.

With the advent of the month, there will be the usual change in the personnel of our visitors. So far, the season has been a good one for house letting.

The erstwhile woodland allocated for our golf course is being gradually cleared of brushwood, and soon we hope to see a practical step towards the completion of the project.

It is no secret that not a few applications for housing accommodation during the summer months stipulated that a golf course in the immediate vicinity was indispensable. By another season we hope to be able to oblige.

Note : The first world war would prevent this plan from happening.

The first public appeal for funds to complete the laying out of a golf course in Lumphanan was made by a sale of work held in the Parish Hall on Saturday afternoon, and resulted in over £100 being realised. In 1914 the late Dr Farquharson of Finzean gifted a piece of ground suitable for the purpose. This ground, which lies to the South of the village consists of 28 acres of woodland and 7 acres of arable land. It has been partly laid out ; a sum of £136 having already been spent. To complete the course, which will form a valuable asset to Lumphanan and neighbourhood, a sum of £200 is required.

Mr William Horne, Bankhouse, in introducing Mr J. Herbert Taylor, Rhu – Na – Haven, Aboyne, said Mr Taylors presence was but another proof of that gentleman’s interest in local matters and of his kindness in answering a call for aid ( Applause ).

Mr Taylor expressed his pleasure at being able to assist the people of Lumphanan in so worthy a scheme. He was sure, he said, that a golf course would prove an asset, especially to the young people of Lumphanan, and he was quite sure that soon a team of golfers would be sent to Aboyne which would be able to hold its own with its neighbours. ( Laughter and Applause ).

He gave a graphic description of the trials of a golfing novice, and said that to the uninitiated golf seemed an easy game ; it certainly taught you to keep your temper. ( Laughter ) The enthusiasm of Lumphanan people could be judged from the display of work there that afternoon, and the stallholders were eager to sell, so he would say to all visitors to “ Carry On.”

Lumphanan is the latest Deeside village to enhance its amenities with a golf course. The proposal to provide a golf course was first made in 1914, and the late Dr Robert Farquharson, ex M.P., for West Aberdeenshire, generously gifted a piece of land outside the village for the purpose. The war, however, interrupted the movement, and it was only last year that the committee reassembled, with Mr R. Moir, Bridge View, as chairman, and J. Clark, Craig Cottage, as secretary. An appeal for funds was made to the residents, who responded heartily, and about £200 was subscribed.

Designed by Mr J. Marr, C.F., Aberdeen, the course comprises nine good sporting and tricky holes. The ground is rough woodland. It is hilly, and lovely views of the picturesque countryside are got. Bogey for the course is 36 as follows :-

The new course was opened on Saturday afternoon, before an attendance of about 100, by Mr Joseph Farquharson, R.A., of Finzean, brother of the late Dr Farquharson, who provided the ground. Amongst those present were :-

Mr Moir presided, and, presenting Mr Farquharson with an inscribed driver, asked him to drive the first ball. In doing so he thanked all who had contributed to the funds for providing a course. In time it would be an interesting and attractive course, and will bring visitors to the village.

In driving off, Mr Farquharson laughingly observed that it was 10 to 1 on his missing, but he got quite a good drive, which was heartily applauded.

Mr Farquharson congratulated Lumphanan on seeing their hopes of having a golf course realised and said they would be sure to derive much enjoyment and good health in playing over it. He did not wonder nthat golf was played everywhere.

The reason for its popularity was its advantages over other games. They could play golf in all kinds of weather. Enthusiasts, be believed, played with a red ball when snow was on the ground. Then they could play golf all their lives. They need not be all equally good players. Handicaps brought the worst and best together, it was not like cricket. If one was a poor player, one’s wicket was taken first ball, and the rest of the day was spent looking on.

The inland course, he continued, was a modern invention. When he was a young man, it was thought that the proper crisp grass could not be found inland. Now, however, there was scarcely a village in Great Britain that had not its golf course.

He was interested in leaving London to watch the miles and miles of golf courses and he began to wonder whether there was not more land under golf than under grain. ( Laughter.)

He wished them all success and hoped they would produce great players who would be able to compete in the big tournaments. ( Applause.)

An exhibition game was then given by Mr James Cooper, Aberdeen Links champion, and Mr W. Summers, Balnagask.

Alluding to the late Dr Farquharson’s generosity he said that with his Doctor’s viewpoint he thought it best to send them round a hilly course. The atmosphere at the top was alpine, and down below it was relaxing. He thought it would be the most sporting course in Deeside. They had to acknowledge their indebtedness to the committee of the golf club. Which he wished all success.

Mr Clark, Secretary, replied and said that already the membership was somewhere between 50 and 60. ( Applause.)

Mr W. Horne, Banker, proposed “ The lord of the manor,” and said that to the late Dr Farquharson, the best of lairds and the best of M.P.s., they nhad an equally kind and generous successor in his brother, Mr Joseph Farquharson. ( Applause.)

Responding, Mr Farquharson thanked them for the kind things they had said about his brother and himself. The only thing that was wrong with Lumphanan, he said, that it was not near enough Finzean.

Other toasts were :- “ The committee and their advisor, Mr Marr,” by Mr R.B.B. Finlayson, solicitor, Aberdeen, replied to by Mr J. Mudie ; “ The Players,” by Mr J. McLean, Headmaster, Central School, Peterhead. 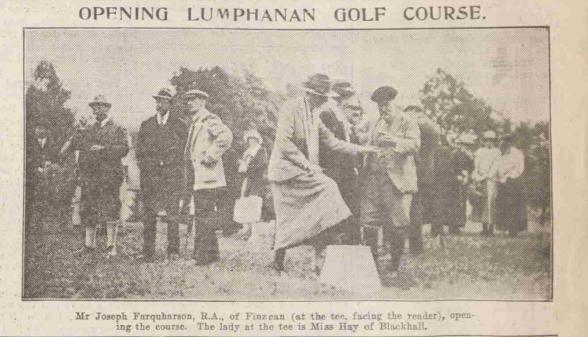 Lumphanan golf club opened the season with a successful Secretary V Captains Match.The games were evenly contested and ended in a draw.

Lumphanan Golf Club.  Instituted 1914.  A 9-hole course on the Hilton area of Stot Hill.  The land, owned by Dr Farquharson of Finzean, was leased to the club at a nominal rent along with a croft to serve as a clubhouse. (3rd SAS, Vol 7).

“The club thrived in its early years. At the peak of its popularity in the 1930s it was possible to buy a Sunday excursion train ticket from Aberdeen to Lumphanan for 4s6d. Included in this price was a round of golf and afternoon tea at the hotel! But membership declined after the Second World War and with the closure of the Royal Deeside Railway, the club was disbanded in 1967, the course falling into total disrepair during the ensuing two decades.”