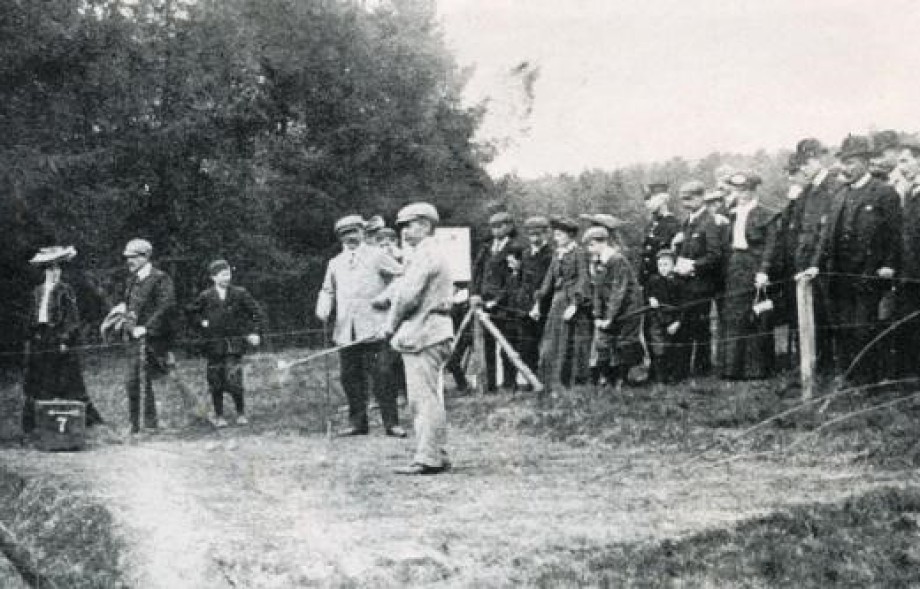 The ground of this club was formally opened on Satuday afternoon in favourable weather and in presence of a large and fashionable attendance. The Captain of the club, Mr J. Stephen, Craigrownie House, presided, and the company had drunk to the health of the Queen, as Heriditary patron of the Ancient game, proposed “ Success to the newly formed club.”

It would, he said, supply a want long and keenly felt in the district by affording means of healthful recreation and opportunities of social intercourse so often deficient in coast resorts. He bespoke for the club the hearty support and help of all those who had the welfare of the community at heart. The toast was enthusiastically received.

Dr Alexander, Hon. Secretary, in reply, emphasised the desirability and necessity of such a club, and stated that he had received such gratifying support and sympathy as to warrant the belief in the ultimate and great success of the scheme. The Rev. Mr Macleay proposed the Health of the Captain, who had been unanimously appointed, and but for whose energy and enthusiasm the club would scarcely have emerged from it’s embryonic state. The toast was received with three times three. Mr Stephen acknolwledged the hearty assistance he had received from the other members of committee, and asked the company to drink the health of Mr Smillie, the farmer, who had given permission to use his ground on favourable terms. The Rev. Mr McLean proposed the health of the Ladies who had graced the occasion with their presence, and hoped they would use their influence in inducing gentlemen to join the club, as the game seemed to him to be suitable to all sorts and conditions of men. Matches were then arranged, and the first foursome played off, consisting of Mr Stephen and Mr Forgan V Dr Alexander ( Glasgow )and Mr McLeay, the captain driving off the first ball amid great cheering. The match resulted in a win for the Profesional gentlemen by five up over a course of twelve holes. Other matches were engaged in, and were watched by a large number of spectators, who manifested a lively interest in the games. The entire proceedings were eminently successful, and auger well for the future of the club. The ground, notwithstanding the heavy rain, was in fair condition, and, after a little expenditure of time and labour will no doubt be much improved. The view from the course is unrivalled in the West of Scotland, and the committee are to be congratulated on the manner in which they have brought their labours to such a pleasant termination.

The attractions of Cove and Kilcregan.

The golf club, which was started last year, has proved a success, numbering some thirty resident members, and doubling this number in the Summer Time, when visitors are admitted to short periods of membership on easy terms. The ground which is situated at Craigrownie, about half a mile above Cove, affords one of the finest courses in the West Coast, and has the advantage of commanding a prospect over the firth such as for grandeur and ever-changing interest it would be difficult to surpass anywhere.

The annual meeting of this club was held in the Burgh Hall, when the following office bearers were elected :- Mr John Stephen, Captain ; Mr Peter Donaldson, Vice Captain ; Mr Wm Austin, Hon Treasurer ; and Mr Henry J. Keay, Hon. Secretary. New members are invited to join the club, and it is hoped greater interest locally will be taken in the affairs of the club. The course is interesting and the turf very good.

It is reported that this club is negotiating with His Grace the Duke of Argyll to take on lease of South Ailey Farm, Cove, for the purpose of forming a golf course. Should the club be successful in obtaining the farm, a first class course could be formed within easy access of both ends of the Burgh.

The committee of Craigrownie Golf Club have acquired the ground immediately behind the bowling green, and extending to behind Cove Village, for the purpose of forming a new course for the club. Application has been made to the Town Council for permission to form one green within the recreation grounds. The new course will provide better playing ground than the old one, and be much more easy of access to the majority of players.

Fundraising for the New Course.

A most enjoyable and successful concert and dramatic entertainment by local amateurs and friends was held in the Burgh Hall of Cove and Kilgreggan last Friday evening in aid of the funds of the local golf club. The chairman, Mr Alfred A. Hurry, in a few opening remarks, referred to the success which had attended the club’s removal to links nearer the shore, and explained that the money drawn that night would to some extent reimburse the club it’s outlay in formation expenses. He also referred to the inception of the club 24 years ago, under the present Captaincy of Mr John Stephen, with Dr L.D. Alexander as Hon. Secretary, and expressed the hope that the club would have further life put into it by a large addition to the annual membership, thereby enabling the committee to continue the policy of making the course as attractive as possible, not only for the benefit of annual members but also in view of the increasing patronage of summer visitors. A hint was thrown out to the local Burgh Council that the great popularity of golf was a factor to be reckoned with in administrating the affairs of a coast resort, to which summer visitors might be attracted by popular links.

The entertainment proved to one of the most enjoyable held in the district, as was evidenced by the enthusiastic appreciation shown by an audience of nearly 300 people. The little sketch at the close, entitled “ Ici on Parle Francais,” was excellently performed and splendidly received, and great praise is due to those ladies who carried it through.

The members of Craigrownie golf club held their annual general meeting in the Burgh Hall on Saturday – Mr Alfred A. Hurry in the chair. The Hon. Treasurers statement showed an increase in the income of £30 and a balance in hand of £31, these figures being all the more gratifying in view of the additional expenditure incurred in forming the club’s new Links. Evidently the removal to links nearer the shore has been fully justified by results. The following office bearers were elected ;- President, Lord Inverclyde ; Captain, Mr John Stephen ; Vice Captain, Mr Alfred A. Hurry ; Hon. Secretary, Mr Henry S. Keay ; Hon. Treasurer, Mr W.C. Austin ; and Hon. Auditor, Mr James M. Brodie. An interesting part of the proceedings was the presentation to the Hon. Secretary, Mr Henry S. Keay, by the chairman, on behalf of the members of the club, who explained that they desired to mark their appreciation of Mr Keay’s efforts in assisting to bring about the club’s present success. The presentation took the form of a handsome silver cigarette case and gold pencil case. The Hon. Secretary having replied. The gentlemen retired, and the annual meeting of the ladies section was held. At this meeting the following office bearers were elected ;-  Captain, Miss Donaldson ; Vice-Captain, Miss McArthur ; and Hon. Secretary, Miss McLeish. The ladies were particularly active during the past season, a record number of mixed foursomes competitions having been held, their energies culminating in a very successful concert and dramatic entertainment, to which reference has already been made in our columns.

Through the kindness of Mrs Slater, the popular Captain of the ladies section, the members and visitors spent a most enjoyable day on the links last Saturday. A mixed foursome for prizes presented by Mrs Slater and open to visitors, proved most successful, and tea, cakes, and sandwiches provided by the same lady, in picnic fashion, during the afternoon and evening added greatly to the day’s pleasure. Result of mixed foursome :- 1st, Miss J Keay and W.A. Stewart, 84 ½ ( 17 ½ ) ; 2nd, Miss Kinloch and John Christie, 89 ( 18 ). Other scores – Miss Naismith and W.C. Austin, 90 ( 19 ) ; Miss Cochrane and Rev. K.I. McKiver, 93 ( 22 ).

On Wednesday evening members and visitors turned out to witness an approaching and putting and driving competition for Mr Keay’s prizes. Result – Approaching and Putting, W.C Austin ; Driving, D.S Stevenson.

A meeting of members was held on Saturday evening in the Burgh Hall to consider the position of the club. Mr Alfred A. Hurry, Vice Captain, presided. After stating that the secretary had joined the army, and how indebted the club was to Mr Keay, the chairman narrated that the club was suffering like other similar bodies from the effects of the war, that with a view to conserve the course, the lease of which expired in May, an appeal had been made for donations and for renewal of subscriptions, and that the response was satisfactory, a sum of £40 having been promised. Among the donors were Lord Inverclyde, Provost Gilchrist, Mrs M. McGlashan, Mr F.W. Stewart, Professor Teacher, Mr and Mrs McCoard, and others. The treasurer had reported that the farmer had agreed to make a deduction from next years rent. It was agreed to carry on the club. During the absence of her brother Miss Jessie Keay was appointed assistant secretary.

Negotiations which have been proceeding for some time between the committee of the Proposed Golf Club and the trustees of Roseneath Estate have now apparently taken definite form. On the farm of South Ailey, Cove, which is advertised to let as from November next, over 90 acres are reserved for the use of the club, the grazing of this part being restricted to sheep. The remainder of the farm land and steading is offered for general agricultural purposes. It is understood that an 18-hole course will be laid out.

D. Adams, accompanied by the local committee, pegged off the new course at Kilcreggan on Thursday. Although there is ground for 18 holes it has been decided to lay out nine in the mean time. It is expected that the greens will be available for play during the summer.

The golf course committee have appointed a greenkeeper, and it is intended to lay out a nine hole golf course for this season. On the expiry of the present lease of South Ailey Farm at November next, the additional ground required for an eighteen hole course will be acquired and laid out.

The Craigrownie Golf Club ( Limited ), 147 Bath St, Glasgow. Capital, £2000, in 1960 ordinary £1 shares and 800 “ B” shares of 1s each. Public Company to provide a golf course and recreation ground in the Burgh Of Cove and Kilcreggan, in the County of Dumbarton, or such other place as the company may select etc.

The new golf course is proving to be a great attraction to the district. During the past few days players have been very numerous. The Pavilion erected on the course by Messrs Cowieson, Glasgow, should add considerably to the convenience of members.

Under weather conditions which were ideal the new club-house of the Craigrownie golf club was formally opened by Provost Martin on Saturday afternoon. There was a very large attendance of members and visitors at the opening ceremony, and keen competition was evinced in the various competitions arranged by the committee for the afternoon entertainments.

A very successful whist drive and dance was held in the Temperence Hotel on Friday evening in aid of the funds of Craigrownie Golf Club. About 60 members and friends were present, and all expressed themselve’s as pleased with the evenings entertainment. This is the first ocassion any of the club’s events have been held in the Hotel.

A very successful whist drive and dance was held in the Temperence Hotel on Friday evening in aid of the funds for the Craigrownie Golf Club. Over 60 attended and thoroughly enjoyed the evening.