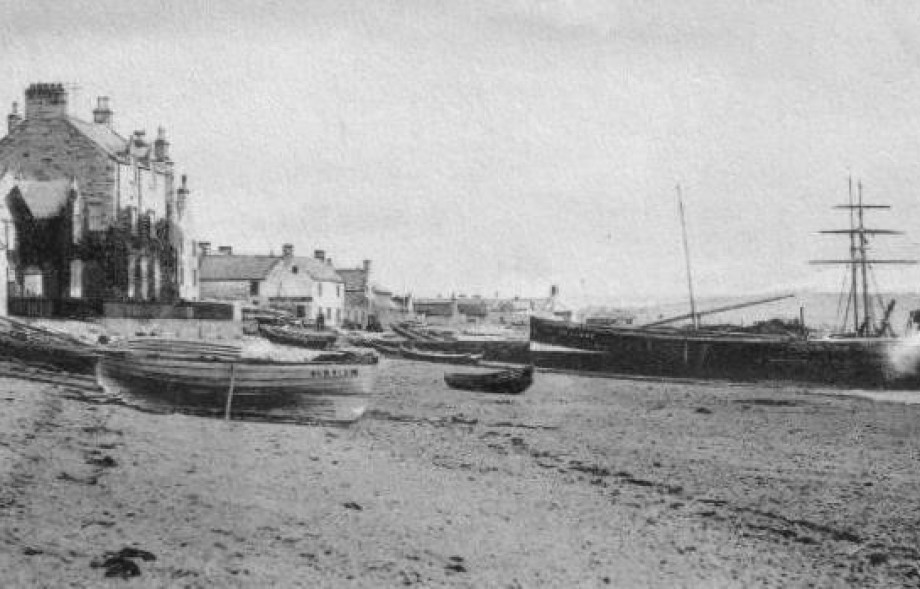 Kinloss. The course at Kinloss was one of 18 holes and was the home of the Forres Golf Club from 1889. However by 1899 it was running into financial difficulties and in 1900 was forced to give up nine of the holes and play on the remainder. The first nine were taken over in 1901 by the newly established Kinloss and Findhorn Golf Club. This had a short and chequered career and eventually closed n 1909..

"From an advertisement in to-day’s issue, it will be seen that the above Club has been formed to play over the nine holes on the Lancot Estate. Players who are members of this Club and of the Forres Golf Club will thus be able to play over the eighteen-hole course hitherto used by the latter Club, which lately found itself compelled for financial reasons to limit its course to nine holes.  We understand that the new Club starts with a large membership and with every prospect of success.  The district owes a debt of gratitude to the gentlemen who have come forward and enabled residents and visitors to continue the enjoyment of a full eighteen-hole course.  We are pleased to hear that Mr John Mackessack of Kinloss, the proprietor of the Forres Club’s course. Is one of the patrons of the new Club."

"This Club has been formed to play over the Nine Holes on Langcot Property now given up by the Forres Golf Club.  The promises of support are already so numerous that the Provisional Committee see their way to restrict the Subscription for this year to 10s 6d, notwithstanding the expenses incurred in forming the Club.

Members of the Forres Club joining this Club will be able to play over the original Eighteen-Hole Course, as formerly.

The Course will be open for play on Monday next,27th May, and cards of membership may be obtained on application to 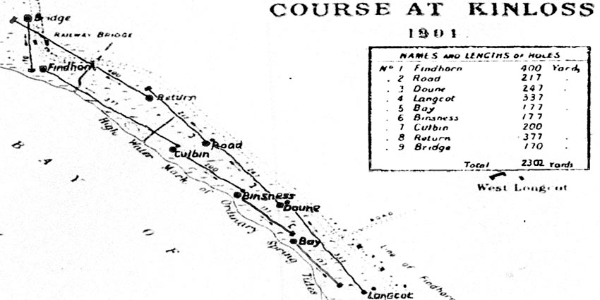 "During the last year or two play over this course has been practically suspended for various reasons, but the want of a golf course was so keenly felt by the golfers in the parish that they resolved to do something to have the half of the course next to the village of Kinloss re-opened. The first step was to approach the proprietor, John Mackessack, esq, of Kinloss. Mr Mackessack received the proposal very kindly and generously promised to give the use of the course rent free, provided that it was under proper management. Accordingly a meeting was held, and a small committee was formed to undertake the management. The greens have been cleared and cut and are really in excellent condition. A notice board is to be erected showing the terms of subscription, and members tickets are being printed and the course is practically ready for use.

Tickets and all information as to membership may be had from Mr Smith, Cullerne, secretary to the club. The course will no doubt be largely taken advantage of by summer visitors to Findhorn, and now that a water supply is to introduced, something ought to be done to popularise the village. This object would be greatly advanced by providing healthy amusement for visitors during a holiday, and a golf course, a bowling green, and a tennis court are almost necessities for this purpose" 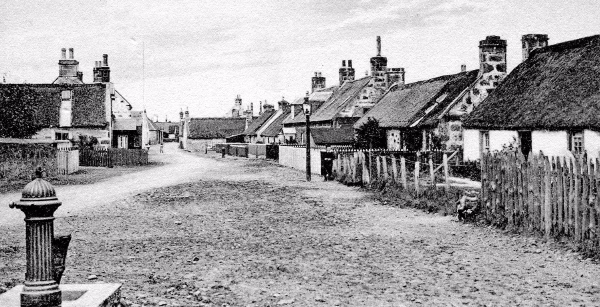 Findhorn The course was just to the left of these houses.

"Yesterday, a meeting was held in the school, Kinloss, to consider as to the advisability of re-opening the golf course. It is some years ago since the course was in general use, and it has fallen into desuetude owing to lack of funds and interest on the part of the people of the district.

Mr Grant Peterkin, of Grange, presided, and explained the objects of the meeting. A golf course was there already, and if they decided to re-open it, they would start with many advantages. They would not have the course to construct, nor greens to make ; they would have to repair them to a certain extent, but that was not such a big item. There was strong demand for a golf course, especially during a certain part of the year. They had a good landlord, who was prepared to meet them on most favourable terms. One of the disadvantages of the project was that they were rather troubled with the tides at certain periods of the year, and, also, they must remember that the course had been started twice before and had failed. On the first occasion it failed because a golf course was started in Forres, and all their Forres members left them ; he did not quite know how it failed the second time. He thought that what they wanted was to get an energetic secretary. That was really what the success of any club depended on.

Mr Smith, Cullerne, spoke of the former attempt which was made to start the club. They got all the necessaries, and also paid a man to keep the greens in order. The only thing they wanted now was a roller. Latterly there were very few players, and still fewer paying members. He went on with the club for three years, but found his funds became exhausted, so he had to abandon the idea. Mr Bruce, Lancot, thought they would get the support of Forres people if they made the subscription reasonable. One Forres gentleman had promised him to do all he could in the matter, and do his best to sell £5 worth of tickets. Another Forres gentleman thought if they could offer prizes for competition they would do better. The chairman said they did not want to encourage pot hunters.

Mr Stewart, Schoolmaster, suggested that a course might be at Findhorn. They might get a professional’s opinion about it. Mr Bruce said a professional had already estimated the cost of that at £100 per hole – that was £900. Rev. Mr McEchern wished to know how much it would cost to run the course at Kinloss. Mr Smith said the chief expenditure would be £1 as wages for a man to keep the greens. The chairman said they should first form a committee to inquire into the matter, and see what support the project was likely to get in the community.

There is no evidence that the Findhorn suggestion was pursued, nor that the Kinloss and findhorn Golf Club was reactivated.