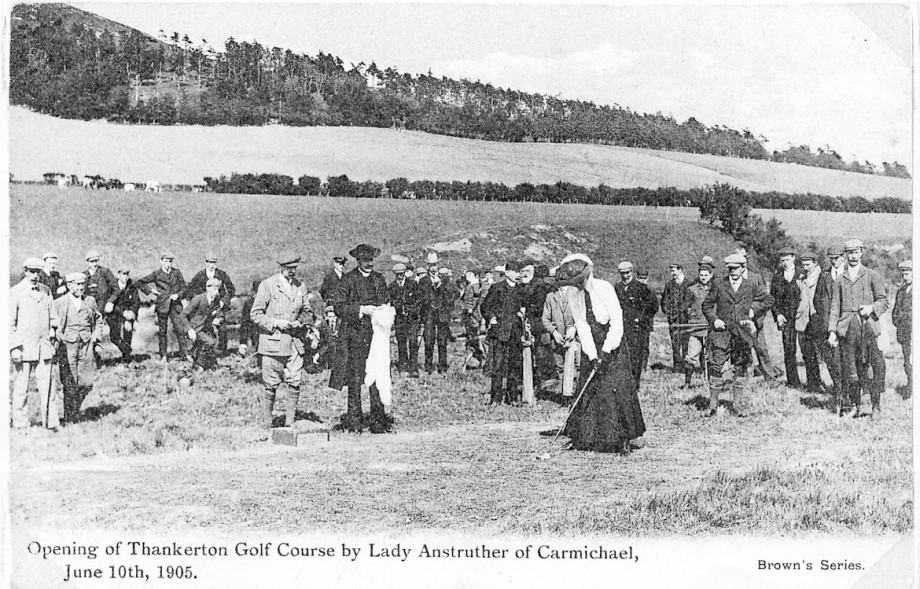 Thankerton Golf Club.  Instituted 1905.  A 9-hole course, beautifully situated along the banks of the River Clyde, on the farms of Thankerton Boat and Muirhouse, half a mile from the station.

"A concert in aid of the new golf course at Thankerton and Symington is to be held at Eastend House on Friday 7th April, and should prove an attraction to the neighbourhood. Several ladies and gentlemen will sing and some members of the Lanark band will be present. It is hoped the concert will be well patronised. The doors are open at 7:30 and tickets may be had from Post Offices, Thankerton, or J.D.Morrison, stationer, La­nark.  (Advert)"   (HA 1 4 1905)

"On Friday evening last a concert was held at Eastend Mansion House in aid of the funds for the formation of a golf course for Thankerton and Symington. There was a splendid attendance, thanks to the energies of Captain Thomson Carmichael, who was mainly responsible for the arrangement of the entertain­ment. A programme of great variety was gone through, which was much enjoyed by the audience. The atisted included Misses Adams, Haldane, N.Lindsay and Inglis. and messrs Brown, Steel, Hodge, Cox and Chancellor."   (HA 15.4.1905) 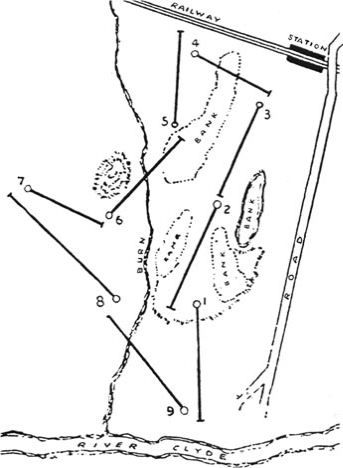 “The Thankerton golf course, which was opened last Saturday, is an important addition to the attractions of this upper ward health resort. The turf is old and of excellent quality and there are numerous hazards. The distances to the holes are:

“The course  was opened before a large company by Captain Thomson Carmichael of Eastend. The Rev W.C.MacGregor, minister of Covington & Thankerton, presided, and along with him were ; Lady Carmichael Anstruther and her son, Sir Windham F.Carmichael Anstruther; Mrs Thomson Carmichael of Eastend ; Major Bertram of Kerswell, and Mrs Bertram ; Mr J.L.Murray of Heavyside &c. On Captain Carmichael declaring the course open, Lady Anstruther was presented with a silver mounted club, with which she drove off the first ball. Several foursome matches were then played. Lady Anstruther and Captain Carmichael versus Mr Brown of Cormiston and Rev Mr Ritchie, Lamington, leading off : Messrs Stewart, Paisley and Johnstone. Pollok versus Lang, Paisley and Walker, Pollok, following on.

The course which was laid out by Mr L.A.Morrison, Biggar, and Mr Stewart, Paisley, is a nine hole one, and is beautifully situated on the banks of the river Clyde, within ten minutes walk of the village.” (HA  17.6.1905.)

“In fine dry weather the clubhouse was formally opened on Sat. by Mrs Thomson Carmichael of Eastend. Mrs Carmichael who was introduced by Rev W.C.MacGregor was presented with a silver key gifted by the vice-captain and after a graceful speech declared the house open. Thereafter, the Hon Hanbury-Tracy of Carmichael performed the ceremony of hoisting the flag on the new flagpole amid cheers from the large assembled Co. On the call of the Hon A.H.Tracy the Rev MacGregor and Mr Robert More votes of thanks were accorded to ; Mrs T.Carmichael the Hon Hanbury-Tracy, Mr Jarret, captain, Mr Campbell and Mr Johnston. A mixed foursome took place, Miss Jeannie Forrest and Mr Hugh McCreadie winners, after a tie with Mrs John Forrest and Mr A.Williamson.”    (GLH 3.6.07)

Golf course - Like other holiday resorts, Thankerton has now secured a golf course, which lies within ten minutes walk of the village and is beautifully situated on the banks of the Clyde between Thankerton and Symington. The formation of the course is now in a forward condition, and it promises to be a very sporting one, with plenty of hazards and bunkers, and is highly spoken of by a number of city golfers, who have gone over it. The opening is expected to take place on 10th June next when Lady Carmichael Anstruther has kindly consented to "drive off" the first ball, while Captain Thomson Carmichael of Eastend will declare the course open. The committee are to be congratulated on the success which has attended their efforts in adding to the many attrac­tions of this beautiful neighbourhood. 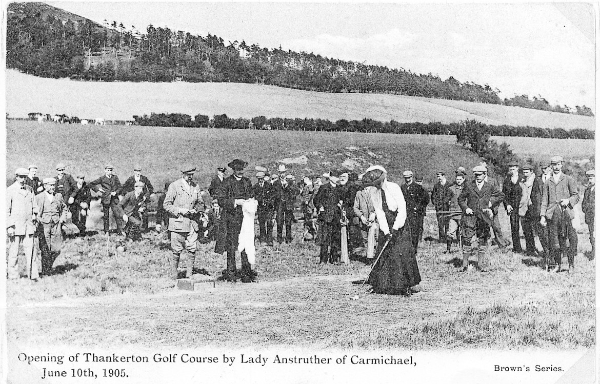 The treasurer intimated that the funds on hand amounted to £69.4/- and that a beginning had been made with the erection of a terra cotta brick clubhouse, which would have ladies and gents rooms and lavatories.

Mr James Barclay, Lothian Road, Edinburgh, has presented the club with a handsome silver cup and gold medal for annual competition. This is the second silver cup that has been presented to the club since it's formation." 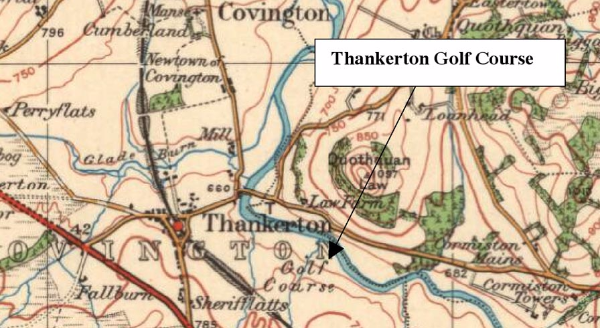 "A grand concert under the auspices of the golf club was held in Covington Schoolroom on the evening of Saturday last. The Rev W.C.MacGregor presided over a large and enthusiastic audience, who thoroughly appreciated the efforts of the various artistes, every one of whom had to respond to repea­ted encores. The artistes, who were almost all summer visitors in the district, were ; Miss Jeanie B Scott, soprano, Glasgow select choir ; Miss Annie Laidlaw, soprano, Carnwath ; Mrs Robert Mc­Ghie, contralto, Hamilton ; Miss Kate Willison, soprano, Kilmar­nock ; Miss E.S.Hamilton, soprano, Glasgow ; Mr John Gilchrist, tenor, Glasgow select choir ; Mr James Young, baritone, Glasgow ; Mr Matt Lowson, Glasgow, was accompanist. Master George and Miss Annie Neave lent a pleasing variety to the entertainment by dancing the sailors Hornpipe, Highland Fling, and Irish Jig in costume, the music being ably supplied by Mr Robert Jackson on the violin.

It is pleasing to know that a substantial sum has been added to the club funds, and the grateful thanks of the commit­tee are due the artistes for their able and generous assistance to this end."   (HA 1.9.1906)

"The AGM was held on Sat evening last. Mr J.C.Jarratt, the captain, presided over a good attendance.

The secys report was submitted and approved, a feature of which was a gratifying increase in the membership from the previous year. The financial affairs of the club were reported to be in good condi­tion.

The following office-bearers were appointed for the ensuing year ;

The secy intimated that Mrs Andrew More, Carn-Dearg, had gener­ously presented the club with a handsome brass lamp to be compe­ted for by ladies and gentlemen."

"In fine dry weather the clubhouse was formally opened on Sat. by Mrs Thomson Carmichael of Eastend. Mrs Carmi­chael who was introduced by Rev W.C.MacGregor was presented with a silver key gifted by the vice-captain and after a graceful speech declared the house open. Thereafter, the Hon Hanbury-Tracy of Carmichael performed the ceremony of hoisting the flag on the new flagpole amid cheers from the large assembled Co. On the call of the Hon A.H.Tracy the Rev MacGregor and Mr Robert More votes of thanks were accorded to ; Mrs T.Carmichael the Hon Hanbury-Tracy, Mr Jarret, captain, Mr Campbell and Mr Johnston.

`'The secy is this week in receipt of a handsome Gold medal from Major the Hon Hanbury-Tracy, C.M.G., Carmichael House, for annual comp amongst the gents, and from Mrs Hanbury-Tracy a handsome solid silver bowl on ebony stand for annual comp amongst the ladies.    They are both unique specimens of art of their kind and were supplied by Messrs Carrington and Co. Regent Street, London."    (HA 27.7.1907)

Mr James Linn Jnr, who organised the competition, intimated that he would be able to hand one pound to the secre­tary to forward to the hon. Mrs Hanbury Tracy, Carmichael house, the local vice president of the Red Cross Society. Before sepera­ting, the company sang " god save the king "."   (HA 29.8.1914)

"The golf course, which was closed during the war, has been re-opened but, unfortunately, the play is restricted to 7 holes owing to the 8th & 9th holes being under cultivation."   (HA 2.8.1919)

"The club has embarked upon a scheme of alterations which will make their course even more suitable as a test of the all round game of "gowf", and give more scope to the player who excels in the lengthy drive."