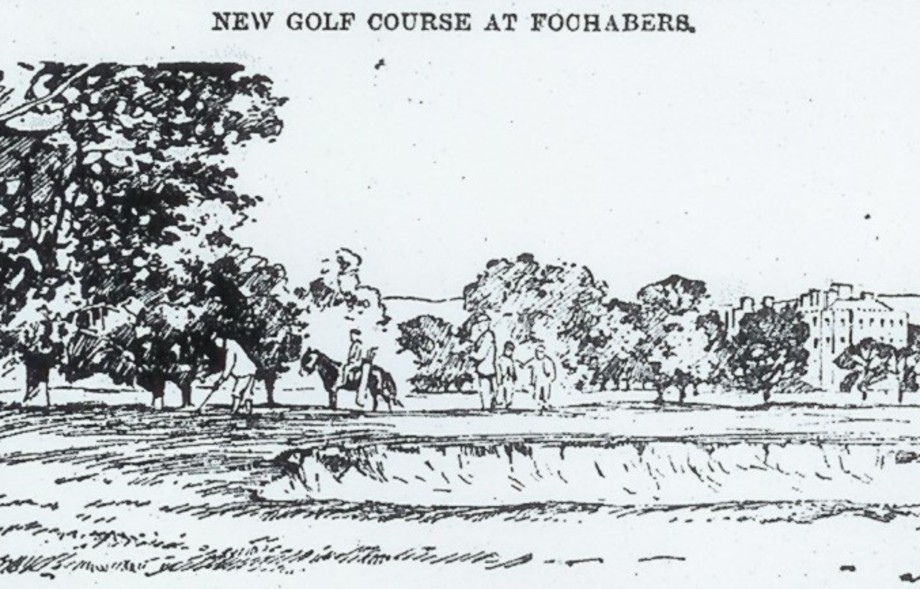 Note the pony carrying the bag of club's.

Fochabers Golf Club.  Instituted 1892.  A 9-hole course in the grounds of Gordon Castle. 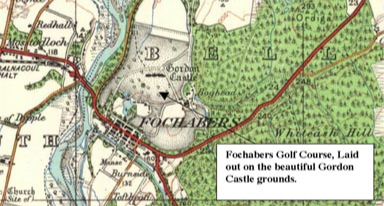 "His Grace the Duke of Richmond and Gordon was approached some time ago in reference to granting a space for a golf course for Fochabers.  With his regard for the good of the town, he fell in with the idea at once, and instructed Mr Osborne, his valet, who is as enthusiastic golfer, to look out for a suitable reach of ground.  None of the sites at Speyside answering the requirements.  His Grace very generously granted the use of his own private golf course behind the Castle for Fochabers. Mr Osborne surveyed and reported upon it, with the result that it will be added to and laid out in a manner which will make it one of the best courses in the North."   (NS 26.11.1892) 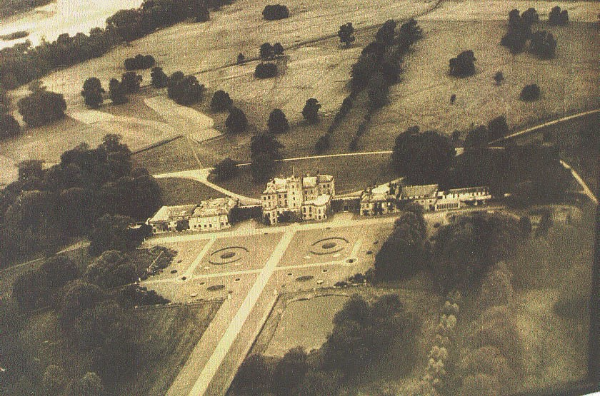 The course can be seen at the rear of the house

Fochabers – Formation of a Golf Club

"In answer to the circular sent to the members of the Fochabers Curling Club by Mr C. Gray, Town and County Bank, Mr J.L.Riach, schoolmaster, and Mr H.R,.Levay, Union Bank over twenty members of the Curling Club met in the Gordon Arms Hotel and formed themselves into a Golf Club. His Grace the Duke of Richmond and Gordon having kindly granted to them the use of his own private course at Gordon Castle, for the club.  It was agreed that the admission fee-be 2s 6d per head, and the annual subscription the same figure. A committee of nine gentlemen, with Mc C. Gray and Mr J.A. Riach as joint secretaries and treasurer, was then formed.  Already the game is fast coming into popularity, as members with loads of golf clubs are often-going and returning to the course."   (NS 31.12.1892) 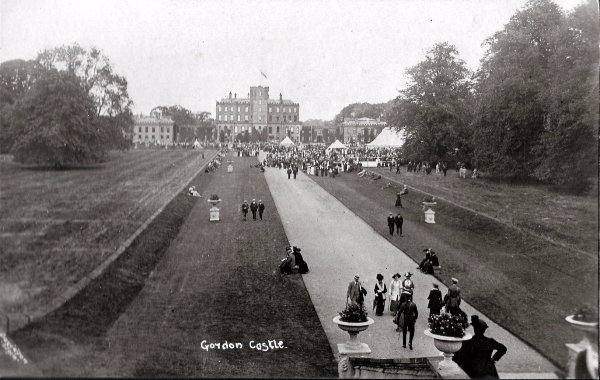 "Fochabers is one of the prettiest little towns in the north of Scotalnd, and to it’s many attractions it has recently added a golf course.

The course is laid out in the park surrounding Gordon Castle, the stately residence of the Duke of Richmond, owing to whose public spirit this beautiful spot has been granted for the use of Fochabers Golf Club. The course is a private one, but visitors can arrange with the secretary of the club to have the privilege of playing over the green at moderate rates.

The course consists of nine holes, and although the nature of the ground prevents the occurrence of many dangerous hazards, there are a few obstacles which it requires steady and careful play to keep clear of.

There are one or two artificial bunkers : there are a number of low fences covered with fine wire netting near the approach to several of the holes : and last, but not least, there is a burn, which constitutes an interesting hazard near the middle of the course. The putting greens are in fairly good condition, and the ground is well looked after by those in charge.

Altogether (writes a correspondent) one could not desire a better place to spend a pleasant holiday in the pursuit of golf : and when I add that the walks round about the town are unrivalled, and the trout fishing in the Spey is free to all comers, it will be admitted that the attractions of Fochabers are considerable.

It is not yet greatly run upon, so that intending visitors can readily secure accommodation. There are two Hotels – The Gordon Arms and the Grant Arms. Mr Proctor, the landlord of the former inn, is not only a genial host, but an enthusiastic fisher and golfer."   (EED 6 8 1895)

“The course has been altered. It was to be the work of Tom Morris, but he was unwell and sent William Lowson, Greenkeeper and Groundsman to St Andrews Ladies Golf  Club, along in his place.  (GI 18.11.04)

"The course is beautifully situated within the policies and close to Gordon Castle, the home of the Duke of Richmond and Gordon   (GYB 1905).

“The length of the holes vary from 160 to 260 yards - Bogey 37.  The turf is excellent inland permanent pasture, and there are some forty bunkers, also a burn, which is crossed three times.  The greens are carefully kept by the Gordon Castle staff of gardeners.”    (WWG 1907).

"A meeting of the lady members of the Fochabers Golf Club was held in the club house on Thursday for the purpose of forming a ladies’ club.  Mrs James A.Webster was elected captain, and Miss Gray The Square, secretary with the following additional members as a managing committee Mrs Knibb, The Bungalow; Miss Stewart, teacher of languages; Miss Bain ,Grant Arms Hotel; and Miss Dora Gray, U.F. Manse"