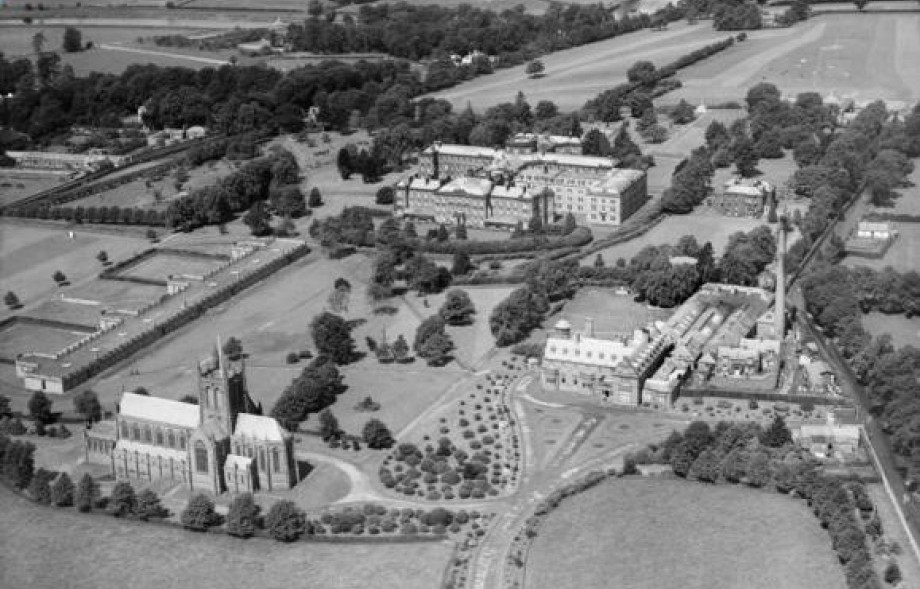 Crighton Royal. Course is at the top right hand corner of the photo.

The Crichton Royal Golf Club was formed in 1884 by staff of the Crichton Royal mental institution.  The first record of the club's golf being played is on October 14th of that year at the Queen of the South Golf Club at Kingholm Merse, South of Dumfries. The club's golf was played both there and at Dumfries and Galloway golf club until the end of the 19th century with subscriptions being payed to these clubs for use of their courses, although a 5 hole practice facility was built on land within the mental institute between Crichton house and the cricket field.

In 1900 the first Crichton Royal golf course was opened on fields between Glencaple road and Bankend road south of Brownhall with a small clubhouse being erected in 1902.

Expansion of the mental health institution in 1906 led to the breaking up of the Brownhall course and a new purpose built 9 hole golf course being built at Maryfield, again between Glencaple road and Bankend Road but bringing the golf course nearer to Dumfries. The formal opening of the new golf course took place on January the 5th 1907 and the new clubhouse on April the 27th of that year.  The holes on the new course were given the names 1) Bankend  2) Mountainhall 3) Allanbank 4) Nithview 5) Castledykes 6) Maryfield  7) The Tower  8)  Hannahfield  and 9) Home.

The first ladies section of the golf club was established in 1921.

In 1966 plans to build the new Dumfries and Galloway Royal Infirmary on the golf course site led to plans being developed to move the course to it's current site on the Bankend road and work began on the new course later that year.  The new course was officially opened on Sunday 20th April 1970.

1999 Saw the opening of a new and major extension to the clubhouse at the Crichton Golf Club providing first class changing and showering facilities for both members and visitors. That year also saw the bar and function facilities change to a public bar which resulted in the facility changing it's name to "The Clubhouse Bar"

In 2010 the lease of the course was taken over by the club members which enabled the club to move forward and undertake a greens replacement project over the winter of  2011/2012.  This proved to be a great success and the greens are now generally accepted as some of the best in the area.