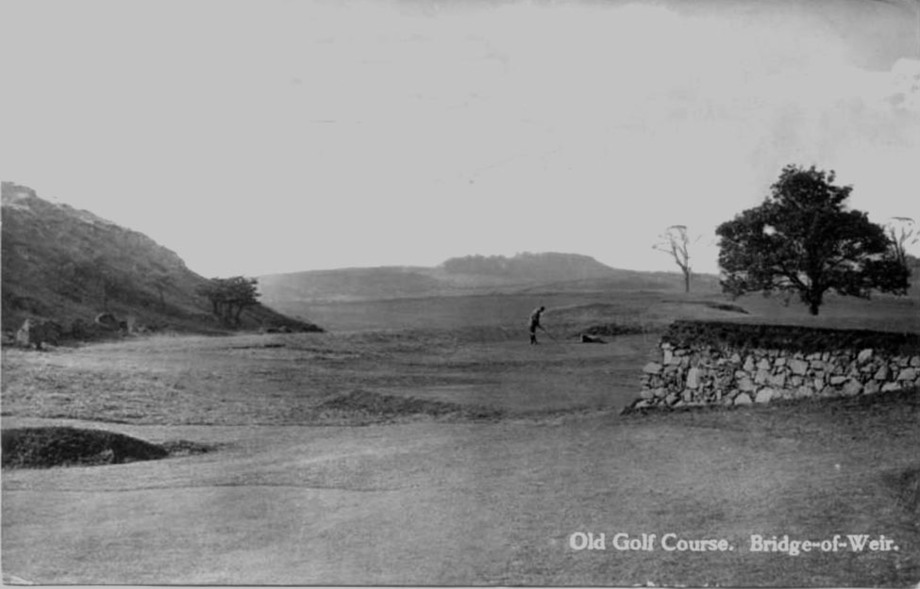 Thistle Golf Club.  Instituted 1896.  A 9-hole course, on Cleaven's Farm, half a mile from Bridge of Weir station. 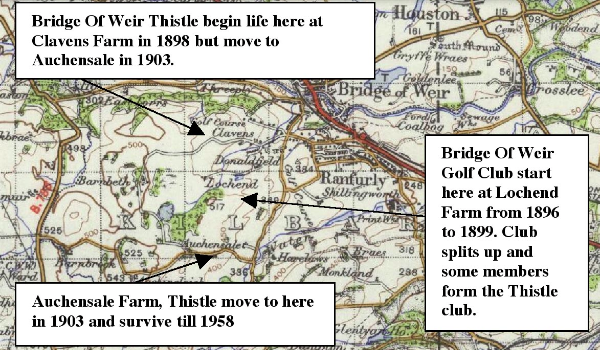 “On Saturday afternoon the newly-formed club, The Bridge of Weir Thistle, opened its nicely laid out nine-hole course, in the presence of a good turnout of ladies and gentlemen, amongst whom were Mr Bine Renshaw, MP, Mrs and Miss Renshaw, Mr J G Fleming, Houstonfileld House. The weather was very unfavourable, being wet and dull.

The captain, Mr D Craig, opened the proceedings by stating that the club was a working-man’s club, but not exclusively so, as they had two MP’s as members. They all had so much pleasure in having their Member of Parliament there with them on this interesting occasion, and before asking Mr Renshaw to drive off the first ball, he had the pleasure in handing him on behalf of the members a driving club suitably inscribed.

Mr Renshaw said he had great pleasure in being with them that day. The game of golf had become an all-important and engrossing one with their legislators, he assured them, and if they had been in the lobby of the House of Commons two or three weeks ago they might have heard many honorary members dwelling on the mishaps of the Parliamentary golfing competition rather than discussing the budget. He then drove off the first ball amid great cheers.”    (S 15.5.1899)

"In 1903, the club reached agreement with Mr Collins, of printing and publishing fame, to accept one hundred of his employees as part-time members able to play on Saturdays only, at an annual fee of 10/- for gentlemen and 5/- for ladies. By the end of 1903 the lease at Cleavens was terminated as Ranfurly Castle had bought the land. But the club was well-prepared and within a year had taken up residence at Auchensale near the Farl o’Breid. A clubhouse was erected and the club stabilised for a number of years despite a short-lived attempt at extend to eighteen holes. However the club closed with the onset of WW1, and remained closed until 1925."
(An extract from the Club history reproduced by kind permission of Ranfurley Castle Golf Club).

The re-opening ceremony was conducted with great occasion by Mrs Andrew Muirhead who drove off the firat ball and was presented with an inscribed silver-mounted club made by James Anderson the former professional at Old Ranfurly Golf Club.

An exhibition match followed featuring Scottish Internationalist John Caven of Cochrane Castle and John Anderson, the Old Ranfurly champion against the renowned Glasgow pairing of John Brodie and William Tulloch, who were to win. Mt Arthur Muirhead presented each player with a pocket book of Bridge of Weir leather.

Mr Muirhead, a past captain of Old Ranfurley, was personally, and through his company, a great and continual benefactor to the Thistle Club in many ways. Many ofthe members were his employees and he would have had their interests at hrart. In 1946, after the Club had been closed for the duration of WW2, it was again the Muirhead family that cme to its rescue, acting as sponsors and entering into a ten-yearlease with Mr Carruth of Auchensale. At the end of this period, in 1956, the club closed and the course wss returned to agriculture and the majority of the members joined the Old Ranfurly Club. ((An extract form the Club history reproduced by kind permission of Ranfurley Castle Golf Club).