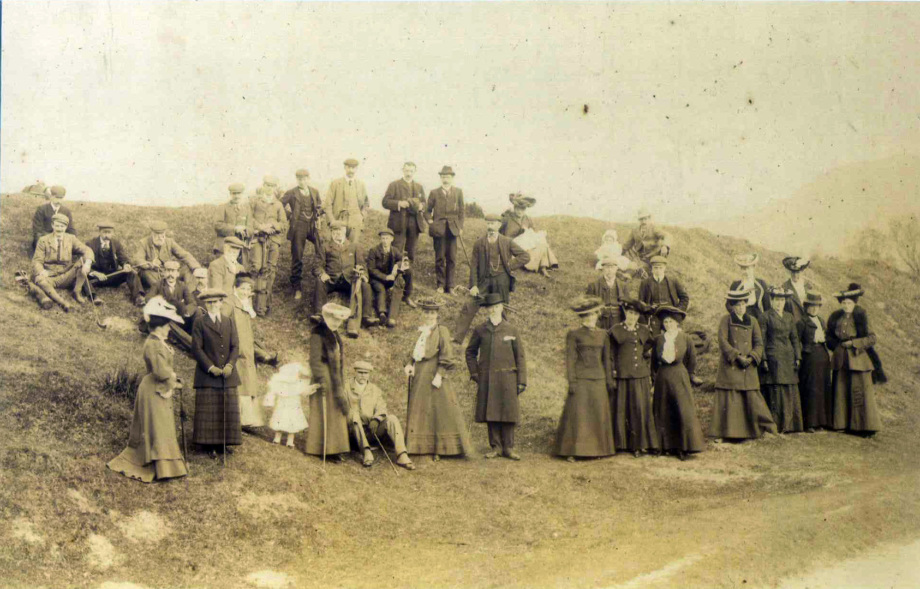 Spean Bridge Golf Club.  Instituted 1904.  A 9 hole course on Blarour, half a mile from the station.

“A new golf course, laid out on the lands of Captain Walker, proprietor of Blarour, was formally opened on Saturday afternoon before a large gathering of the residents and visitors to Spean Bridge. Though cold, the weather was brilliant, and served to enhance the charms surrounding the beautiful links by the banks of the Spean, laid out by Mr Colin Livingston, of the Fort William Club. Amongst those present on the auspicious occasion were: - Mr and The Misses Davy, Spean Lodge; Rev. Mr and Mrs Macintyre, The Manse, Kilmonivaig; Mr and Mrs Anderson, Spean Bridge Hotel; Miss Macfarlane; Miss MacKenzie, and Miss MacDonald, Mr and Mrs MacDonald, 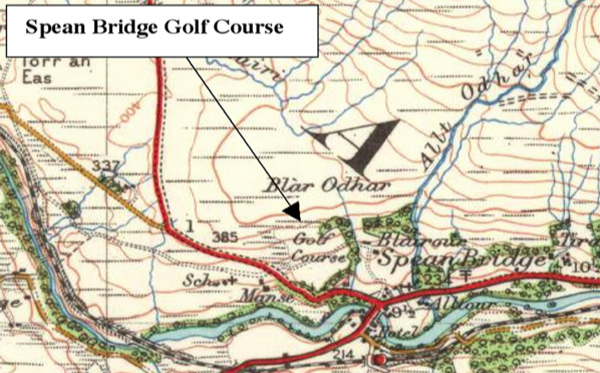 Mrs MacIntyre, of the Manse, most gracefully struck off the first ball, and previous to doing so, in declaring the course open, said :-

Ladies and Gentlemen, - I find myself here in a new and prominent position, which I don’t altogether care for. I am always very pleased to help in any way behind the scene, but I do not like to appear before the curtain. Indeed, when the members of the golf club asked me to be present today, I declined, being horrified at the idea of coming here to raise my voice in the open, surrounded by those grand hills, which make you feel very small, and what was more serious still to me, to have to address the sterner and more critical sex ; but on second thoughts, which are said to be best, I considered it would be discourteous of me to refuse, as you had done me the honour of inviting me. So, here I am ; but rather non-plussed as to what I am to say. My principal duty is to declare this golf course open, which I will do with pleasure. But before doing so, I beg to congratulate the members of the club on the very good order in which they have put the course, so graciously given to them by Captain Walker of Tirndrish and Blairlour. I understand that the greens are excellent, and compare well with others in the neighbourhood. I feel pleased that we have this course as a centre of amusement in our midst, knowing what it means to you all – a place of common meeting, where you can spend many happy hours in the genial game, and so drive dull cares away. It is also a place of health-giving exercise, where, breathing the grand ozone of the Lochaber air, you will add many years to your lives. Another advantage of this course is its beautiful surroundings. Where, I ask, will you behold finer scenery than we now witness ?, and when you get to the top of the course, where, I am sure, none of you will object to pause for a little, judging from my own experience when I got there, you will have a magnificent view, indeed an inspiring one, which I am sure will arouse in your hearts and minds thoughts too deep for words, and in coming down you might yourselves exclaiming in the words of Tennyson –

“ I would that my tongue could utter

That thoughts that arise in me”

However, I must be done, for I am sure you are all longing to begin the match that is to be played this afternoon, and which I hope will be a very good and jolly one, and that the Spean Bridge Men will distinguish themselves on this, the opening day.

I now have pleasure in declaring the Spean Bridge golf course open, and in doing so, express the hope that it will be a scource of enjoyment to you all, not only for this season, but for many to come. My next duty, I believe, is to knock off the first ball, which I fear I shall do but lamely, being a novice in the art. 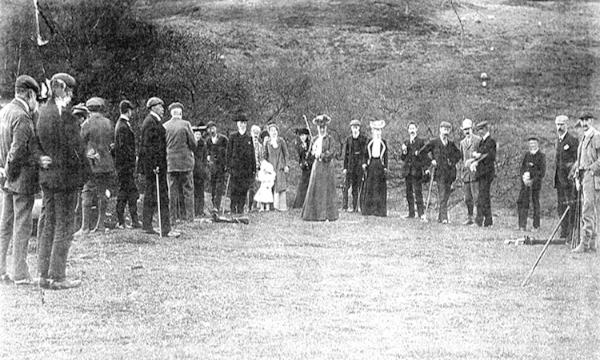 The visitors and members spent the remainder of the evening in a series of friendly singles, returning one and all to the home hole charmed with the links, and clamouring for a challenge from the Spean Bridge club. The Captain is, Mr J. Anderson, Spean Bridge Hotel, and the secretary, Mr Don. Cameron, Merchant, Spean Bridge.”

Did not survive WW1