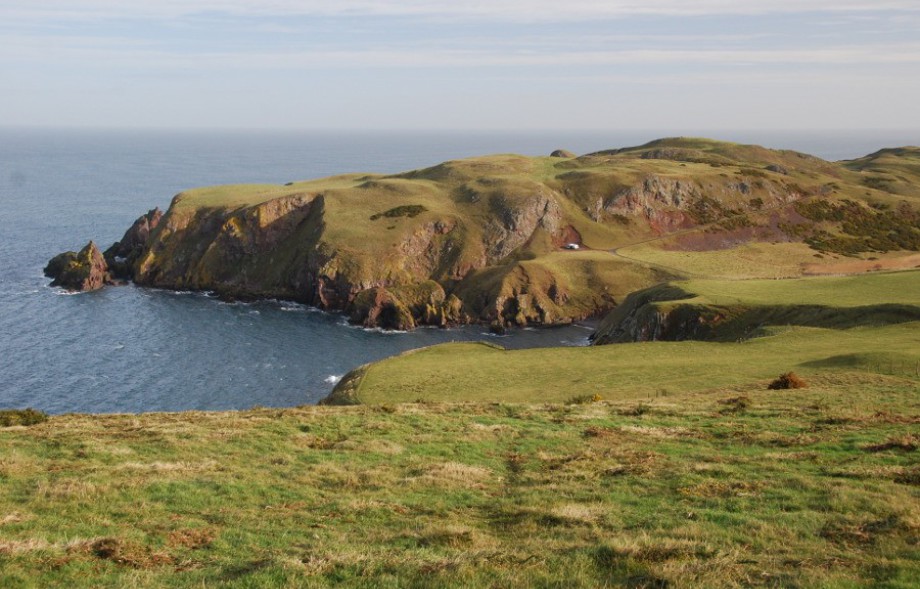 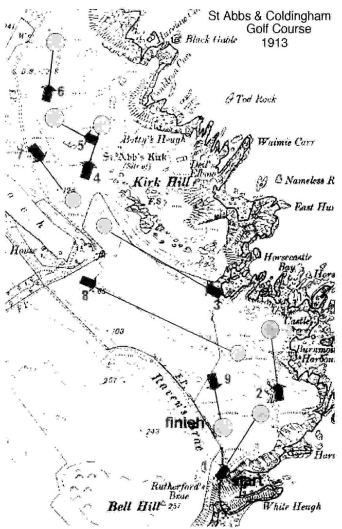 Although the club had been in existence for more than 20 years, it was in a bad state with only two members.” (1908)

The owner wrote that he wished to transfer the golf course from the Loch Hills to the Bell Hill.” (1909) “Ben Sayers, North Berwick, a green keeper came to advise on a course layout. With a club committee he visited the ~Co’Loan, the Bell Hill, and lands at Bogan Green and Westerside. He considered that the Loch Hills was superior and could be made better still. Public meetings at Coldingham and St Abbs endorsed this.” (1910)

The Trustees rejected the continuation of golf being played on the Loch Hills, but they would lay out a course from the Whiteheugh, over Parvesbank to a point opposite the site of S Abbs Nunnery, returning by Harelaw Cove and Parvesbank. The Club were to maintain the course, and have the lease of it for 10 years. 225 shares of 10 shillings were issued [Coldingham 142, St Abbs 83] guaranteeing the maintenance of the course and the erection of a clubhouse. The layout of the course was supervised by David Grant of North Berwick. Construction started in mid April and his employment was terminated at the end of June. The course was opened in July but as the season had been very dry its condition was unsatisfactory. (1911)

The new course is situated on St Abbs Head, to be the seaward side of a line drawn across from the Potticowick Haven and the artificial loch. It is to be of 9 holes, and about a mile and three quarters in extent. The first tee  7 minutes walk from the main road – is to be on Whiteheugh. Thence the course goes across Purvesbank, and due north to a quarter of a mile from Potticowick. Then the line turns south-east by the lighthouse keeper’s garden nearly to the cauldron. From there to another hole near Burnmouth Harbour. And back to Whiteheuch. It provides some excellent sporting features, with some splendid golfing turf, and a good supply of natural bunkers in hills and bits of rough.” (BN 21.3.1911)

To help raise funds for the clubhouse, a bazaar was held in August 1913.It was opened by Mr Mansfield Hunter, a keen and brilliant golfer who was Captain of the Oxford University Golf Club in 1900, and who holds the coveted Gold Medal of the Royal and Ancient Club. In the event, the net taking from the bazaar and associated events was £416.0.41/2d.

In 1915, the greenkeeper William Nisbet submitted his resignation as he intended to enlist. It was agreed that he should regain his position on his demobilisation. (Minutes 1915) After a year in France, William Nisbet was mortally wounded. (Minutes 1917)

The Royal Garrison Artillery commandeered the clubhouse, the tool-shed, and part of the course (Minutes 1917)

Discussions took place with the War Reparations Commission, regarding compensation for the commandeered facilities. Ben Sayers estimated that it would cost £510 to make the course playable once more. After protracted negotiation, the club reluctantly agreed to accept the Military’s final offer of £167.5.6d. Ben Sayers re-appraised the task and stated that the course could be put into a reasonable state for £153.10/-. (Minutes 1919)

No further mention in Annuals.