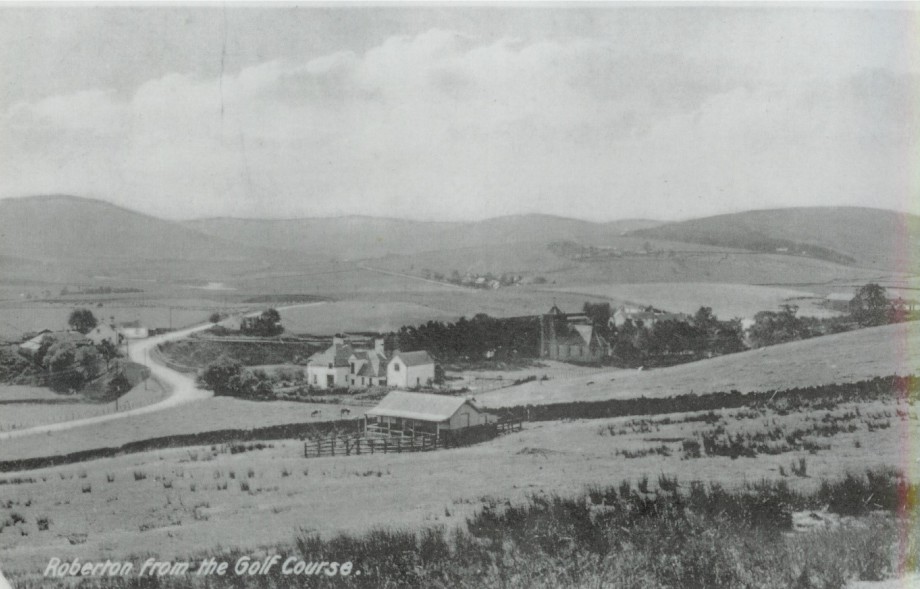 Roberton Golf Club.  Instituted 1892. The first course was at Ladygill, and was altered in 1905 when the available ground was altered. A court case, found in the club’s favour, led to another restructuring in 1909. However, this was unsatisfactory and the club became dormant. In 1914, it was resurected but on a new site at Longwell. The effects ofWW1 took their toll and by 1917 the club had closed. Only for it to be resurected yet again in 1920, on the same site.

"The golf course of nine holes has now been opened close by the village. Of late years many summer visitors have resorted to the district, and this additional attraction will probably be the means of leading others to seek holiday recreation in this upland quarter. The ground neccessary for the purpose was kindly granted by John Findlay esq. of Warrenhill, and John Waddell esq. of Hillend, and the course was laid out by the widely-known golf player, Mr William Fernie of Troon. Mr Fernie speaks very favour­ably of the course, which has a sufficient number of various hazards to render play interesting. Dr Goldie of Edinburgh, who, as a proprietor, is associated with the district, has been invi­ted to become the first hon. president of the club, and the other office bearers that have been appointed are as follows ; Presi­dent Rev T.W.Paterson, Roberton: Captain Rev H.L.Dick, Wiston: Sec & Treas. Mr Greenshields, schoolhouse, Roberton.

An encoura­ging number of members have already connected themselves with the club."   (HA 16.7.1892) 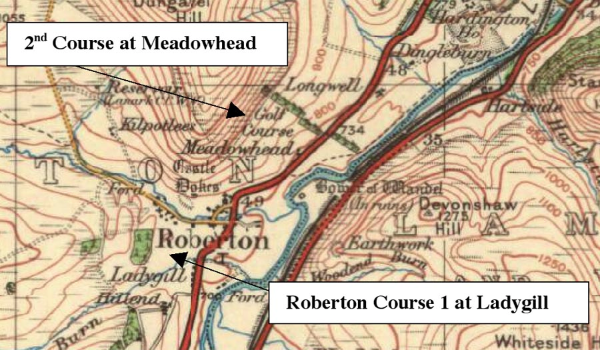 "This course is situated near the village of Roberton, south Lanarkshire. Of late years, many summer visitors have resorted to the district, and this additional attraction will probably be the means of inducing others to seek holiday recreation in this upland quarter. The ground neccessary for the purpose was kindly granted by Mr John Findlay of Warrenhill, and Mr John Waddell of Hillhead. The course was laid out by Mr Willie Fernie of Troon, who speaks very favourably of the course, which has a sufficient number of hazards to render play interesting. Dr Goldie of Edin­burgh, who as a proprietor, is connected with the district, has been invited to become the first Hon Pres of the club, and the other office-bearers that have been appointed are as follows ; President, Rev T.W.Paterson, Roberton ; captain, Rev H.L.Dick, Wiston ; Sec. & Treas. Mr Greenshields, schoolhouse, Roberton. 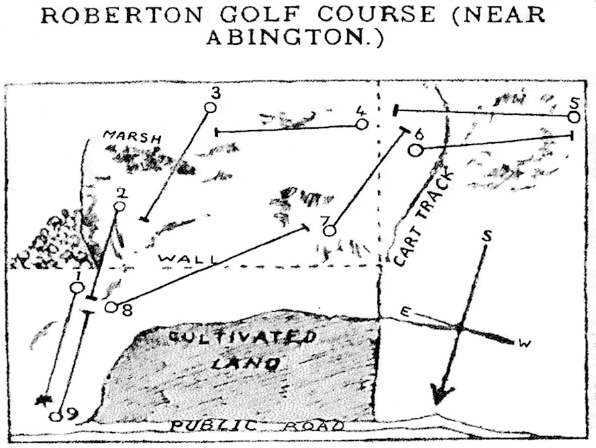 "The Roberton course has this year been considerably altered. Formerly the course was partly on the lands of Hillend and partly on Moorhead and Kilpotlees. Now however the course is wholly on the lands of Moorhead and Kilpotlees. Several new greens have been made. The excessively dry weather has however been much against them, but with rain they should rapidly improve and be got into good working order.

The course is still a nine hole one but should prove very attrac­tive. Visitors should get both health and exercise. The air is bracing and the scenery around magnificent, splendid views can be had from the course. The scenery around Roberton is without doubt the finest in the Upperward of Lanarkshire."

The weekly comp for visitors (mixed foursomes) was played on Sat. in beautiful weather. Twenty eight competitors took part with a large turnout of spectators."   (GH 1.8.1905) 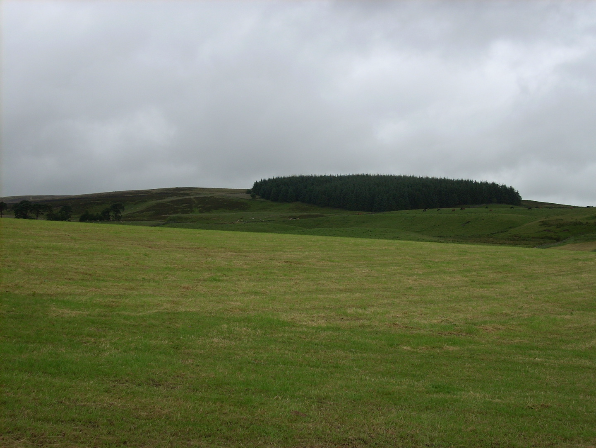 Roberton's 1st course beyond the field

The visitors to Roberton in July have enjoyed a month of splendid weather, and the golf course has been well patro­nised. Various comps have been engaged in , and on Sat afternoon the month's festivities were brought to a close with a garden party, and a comp of mixed foursomes."   (HA 5.8.1905)

"At the Lanark small debt court on Tueday, Sheriff Scott Moncrief heard proof in the action of Maxwell Alexander James Graham, fishing and golf requisite maker, Rober­ton, against John Findlay, sheep farmer, Dunbrook, Roberton. The sum sued for was £20, for loss and damage sustained by pursuer in respect that the defender had let subjects at Roberton, known as Roberton Golf Course, to him for the purpose of carrying on thereon the business or occupation of a golf course for the year from Martinmas 1907 to Martinmas 1908, and that defender on or about 30th May, in breach of sais contract, without warning or consent of the pursuer, took possession of the said golf course, dispossessed the pursuer, and uplifted the subscription of the sum of money paid by the members of the public  for the right or privilege of playing golf during the year, and which but for the defender's breach of contract would have been paid to the pur­suer. The defence was that pursuer had no title to sue and that he was not defender's tenant. The proof lasted for some consider­able time, the Sheriff at the conclusion deciding that there had been no let, and as******ied  the defender, awarding him £2. 5/6d of expenses. Pursuers agents messrs Weir, Grieve and Jeffrey, writers Glasgow; agents for defender, messrs Morris ? and Smith, writers, Lanark."

Sir - As the report in your last issue referring to the above case is somewhat vague and might be misleading, will you kindly allow me to make a few remarks con­nected therewith, as I think they may be of interest. The report says the Sheriff decided there was no let. I beg to say the question of tenancy was quite clearly proved by my agents, who produced the receipt for the previous year. The point Sheriff Moncrieff made the loophole was, whether I had not mutually cancelled my lease by accepting Mr Findlay's terms, which he says I did, on 30th May. The latter came to me on the day stated, and said he was now going to take the course into his own hands. This he admitted in court. I told him he was too late this year, but could do as he liked next year. I continued to cut the greens as usual to the end of the season. The Sheriff held that by continu­ing to cut the greens I had evidently accepted Findlay's terms. Findlay stated in court that I agreed to work to him at a wage of 4/6d per week (one day a week) from 1st June. This would work out at less than £3 at end of season. Was it at all likely I would make the concessional agreement, when I considered myself en­titled to lift the whole subscriptions, which I anticipated would reach about from £15 to £20. I leave those interested to judge for themselves. - I am etc.,

"Through the energy of Mr J.Findlay, this favourite nine hole course has been re-arranged and is now greatly im­proved. The greens are in good order and in the able hands of Mr James Halliday, greenkeeper, should still further improve.

The length is now as follows ;

Golf club - A public meeting for the purpose of forming a Golf Club was held in the Bowling Hall immediately after the general meeting of the Carpet Bowling Club. The Rev G.P.Wallace was called to the chair. The chairman then explained the purpose of the meeting, stating that it was an absolute necessity to have a first class golf course if there was to be any prospect of a station being got for Roberton. He was pleased to state that ground had been secured on the farm of Longwell, overlooking the Carlisle road, the Clyde, and the Caledonian Railway, and it now remained for the meeting to appoint a committee to carry through the arrangements. It was then unanimously agreed to form a golf club. Mr John Forsyth, Glasgow & Hillend, was elected Captain : Mr A.H.Coulthart, secretary : Rev G.P.Wallace, treasurer, toge­ther with a committee of eight.

This has been arranged, and ground to the extent of about 90 acres or thereby has been secured adjoining the village on the lands of Longwell on a long lease.The course will extend from the Parish Church Glebe Eastward to the plantation and lying immediately to the North of the Stirling and Carlisle road.The course has been laid out by Willie Fernie of Troon who reports :- After going over the ground at Roberton i consider it will make a first class course. The undulation of the ground on the golfing line are splendid, and the turf, fine old turf. The soil is of a sandy nature which will enable sandy bunkers to be made throughout the course equal to seaside bunkers. The greens, with one or two exceptions, are all natural. The course is beautifully situated and I do not know of anything better for scenery and a health resort.

The work of laying out the ground is being rapidly pushed forward and it is hoped to have the course ready for play early in May."   (ET 10.2.1914) 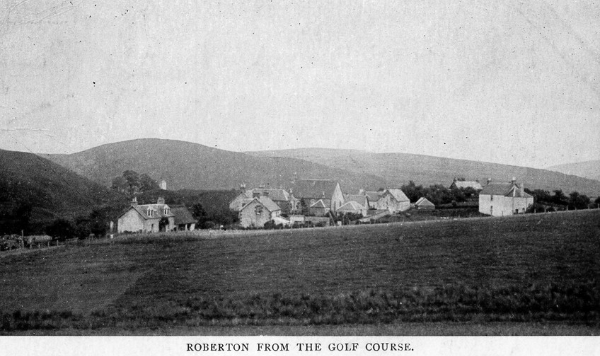 "Sir:-There is a quiet peaceful village bearing this name in the upper­ward of lanarkshire. Beautiful amongst the hills it lies, on the banks of the roberton burn, just where the stream joins the clyde. Healthgiving the visitor finds it, as it lies some 900 feet above sea level. Anglers find it a paradise since they have got into the secrets (and there are many) Of the farmers trout stream. It is some few miles away from a railway station, seems full of brotherly love, and like similar places, is unspoiled by any atmosphere of gossip and back biting.

Now this truly rural spot had for years a small but sporting golf course, which was much appreciated by the visitors and the few natives who attempt to play this simple game. It would be rather a long story to explain the who's and wherefors, but the fact remains that the powers that be, decided that a new golf course was neccesarry to improve still further the attractions of this fine quaint holiday resort. The result has proved painfull in this extreme, and the game pretty much results in that of hunting for lost balls, using language unfit for print all through the course, and struggling with a desire even to swear at the brush - like putting greens.

Is it not possible to make some effort and go back to the old course by another year before golfers are driven in desperation to other pastures green. Should the very excellent and qualified committee not see their way to adopt this kindly hint, can they not be persuaded to make the old course fit to play on. The much needed improvements could be carried out by re-arranging some of the holes and thereby bringing into use the best turf on their ground, at present not utilised. The greens (at least most of them) are hopeless but might be used as teeing grounds. One or two natural greens are on the course and would require but little cultivation. As this onlooker see's most of the game, might a recent visitor be allowed to make these comments, they are done in the interest of the good roberton folks. One thing is certain at anyrate, the view from the links are very beautiful and one freely admits there are no room for improvements there." 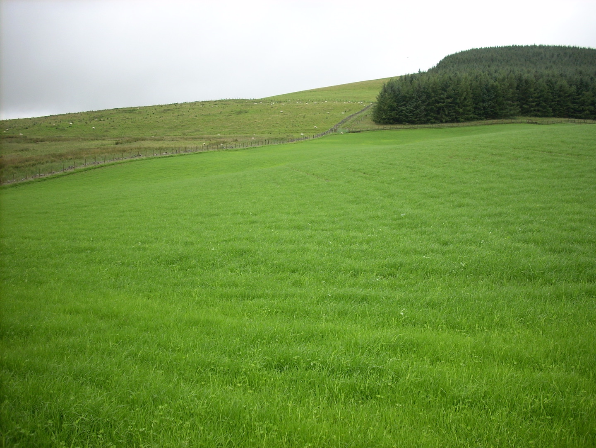 "The Roberton golf club, which has been heavily hit by the late war, is now seeking to reorganize and improve the course.The course is situated on the farm of Longwell.