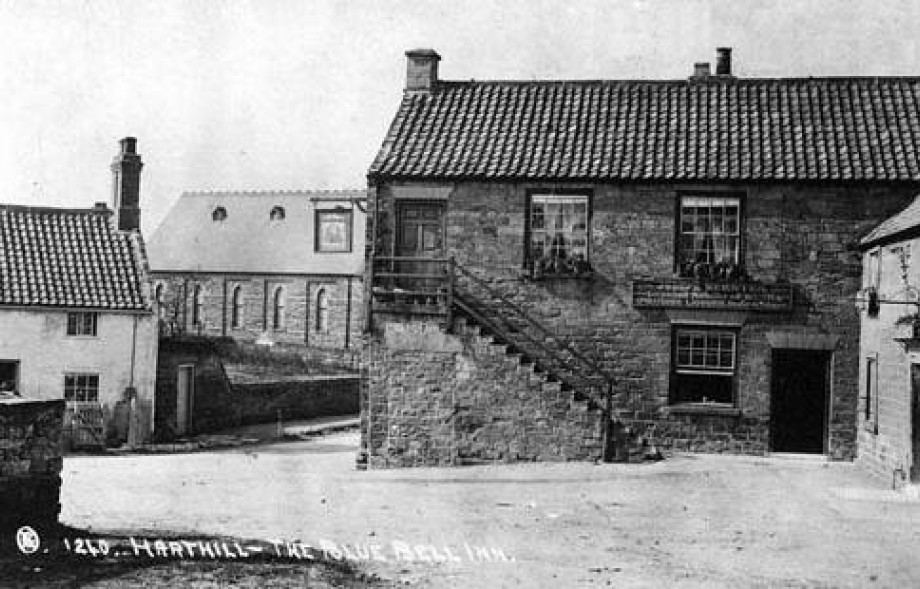 ”The monthly competition for the May medal was finished last week and the Honour was secured by Mr Thomas White of Muirhead, with Mr James White of Hassockrigg as runner up. The weather has not been favourable for golfing, and only a few enthusiasts have as yet put in an appearance. The course has been slightly extended and is now considered to be in fairly good order.”

“A match (11 players a side) took place last Saturday afternoon between Harthill and Knowenoble Golf Clubs. The game, which was played on the Harthill Course, ended in a win for Knowenoble club by 6 matches to 5.”    (WP 30.5.1913)

"The Muirhead Club is going strong now and on a recent occasion the members were able to make a very creditable appearance against Fauldhouse, who had a victory to their credit earlier in the season.  The home team were able to reverse the decision.

The party was afterwards very hospitably entertained at Muirhead Farm."

"The members of the Muirhead Golf Club played their first match of the season on Wednesday evening when Fauldhouse provided the opposition. A mixed foursome in which 40 players were engaged took place. A pleasant game resulted in a victory for Fauldhouse by seven games to three.

The players afterwards adjourned to Muirhead Farm where thanks to the kindness of Mr and Mrs White, A bounteous repast awaited them."   (WLC 20.4.1923) 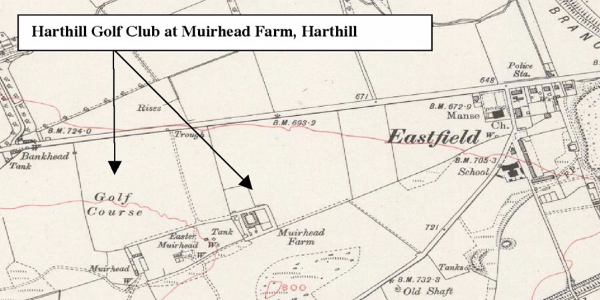 "On Saturday last an open golf tournament was held under the auspices of Muirhead Golf Club at Harthill. The course was in splendid condition thanks to the careful nursing by the greenkeeper, Mr Daniel Cameron, and the prizes were numerous, beautiful and enticing.

At 3.30pm the time for the first couple to drive off, a very fine turnout of players and visitors and spectators had assembled and as old King Sol was on his best behaviour, the stage was set for a very fine afternoon’s enjoyment, for besides the strenuous competition proper, there were the somewhat easier competition’s of pitching and putting for each of which valuable prizes were offered.

Altogether 39 competitors started off in the handicap competition and once all had completed the full distance the ladies of the club were kept busy in supplying the good things usually associated with the nineteenth hole, for as one competitor was heard to remark, “ Twa oors up here is as guid as a day at the seaside”.

After all had been satisfied, the secretary Mr Wm. R. Fulton, by whom all arrangements for the competition had been made, in a happy and jocular vein, thanked all the visitors for their presence, conveyed the hope of Muirhead Club that the competitors had enjoyed themselves amongst the quarries and dykes of Harthill.

Votes of thanks to the ladies who had helped so much to make the day a success, to the greenkeeper, and to the secretary, brought a highly successful and most enjoyable afternoon to a close."   (WLC 3.6.1927)

"On Thursday afternoon of last week, a most interesting and enjoyable match was played over the Muirhead Course, Harthill, kindly granted for the occasion by the Muirhead Golf Club. The participants were the outside officials of the United Collieries Ltd, against the Head Office Staff, Glasgow.

The match consisted of 16 players a side. The weather was delightful and the course was in fine order. Some keenly contested games resulted. At the finish it was found that the head office staff had won 7 games, lost 5 and halved 2, thus winning the match by two games.

After the match, the players accompanied by a large following of non combatant supporters from the head office, about 50 in all, adjourned to Muirhead Farm, where Mr and Mrs Thomas White had prepared for them one of the best of the famous Muirhead Spreads."     (WLC 10.6.1927)

"The semi-final ties and final ties in connection with the “ West Lothian Courier” Challenge Trophy competition were played over the Muirhead ( Harthill ) course on Saturday. The semi-final draw was Muirhead v West Lothian, Fauldhouse V Linlithgow. The weather was dry but dull when play commenced shortly after 2 o’clock. Muirhead were the Winners."    (WLC 14.6.1929)