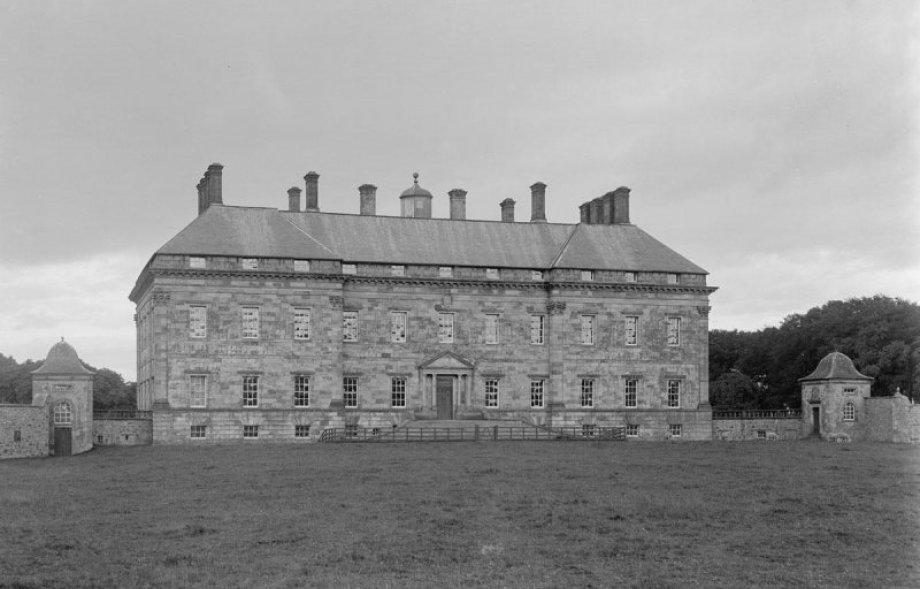 Kinross Golf Club.  Golf, in Kinross, was regularly on the move, using, in all, seven courses. The first course opened in 1864 was of six holes adjacent to the station. In 1891 the club moved to a 12-hole course at Lochside. From 1895 it was at a 9-hole course at Whinside, before returning in 1903 to Lochside. A new 9-hole course was opened in 1906 adjacent to Kinross Junction. After WW1 the club was allowed to play over the local Laird’s private course, before opening a new course in 1932 at Turfhills. 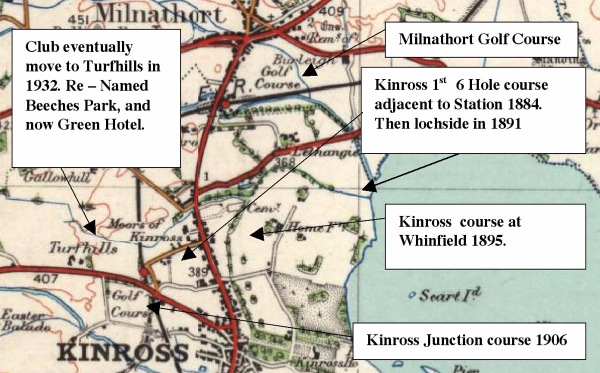 Kinross Golf Club.  Instituted 1884.  A 6-hole course, laid out by Tom Morris on the Kirkgate, land adjacent to the Station.

“The first of the monthly competitions of this club took place on Saturday on their new green at the Lochside. The course, at present laid out, consists of twelve holes, and stretches along the banks of Loch Leven. The putting greens are still somewhat rough, but are rapidly improving.

“In 1895, the club opened a new 9-hole course at the south end of the town at Whinfield, around the edges of Loch Leven, on land rented from Sir Graham Montgomery (later Kinross Estate Company) Being an inland green it is innocent of sand bunkers, but plenty of hazards are found in dykes and other fences, trees, furze, and a small stream which meanders through the coarse, and has to be played over four times in a single round.”

The course is at Whinfield, close to the town, and consists of nine

holes. Being an inland green it is innocent of sand bunkers, but

plenty of hazards are found in dykes and other fences, trees, furze,

and a small stream which meanders through the coarse, and has to be

played over four times in a single round. Kinross Junction Railway

Station adjoins the course, and there is excellent accommodation at

The only club prizes are a Scratch Medal and a Handicap Medal.

The Lowest Scratch Score in a club competition is 81, made byH. B.

“The Kinross golf Club which was instituted in 1885, has during he past two or three years been almost extinct, owing in a great measure to the introduction of bowling, and the removal of the club nearly two years ago from its old and picturesque course along the shores of Loch Leven to a much less attractive and suitable course adjoining the north entrance to Kinross Estate. This appears to me to be the Whinfield mentioned in Golfing 1889}

A number of enthusiastic golfers have recently bestirred themselves to resuscitate the club, with the result that they have been successful in getting about sixty members. After satisfactory negotiations with the present tenant of the old Lochside course, who was willing to let them have the three fields for seven years, and cut a way to the far away field, a meeting of those interested in the club, was held in the McIntosh Memorial Institute on Tuesday evening, presided over by Mr Charles Hepburn. It was unanimously agreed to take the old Lochside course, subject to the consent of the laird, Sir James Montgomery, Bart.

It was resolved to make the annual subscriptions as follows: 12s 6d for full membership, 7s 6d for ladies, and 5s for juniors and artisans. Office-bearers were elected as follows:- President, Mr J J Moubray of Naemoor; captain, Mr John M Stevens; secretary and treasures, Mr James Millar, accountant, Clydesdale Bank; greenkeeper, Mr James Sharp; committee, Messrs J M Ross, C Hepburn, Mackay, F Findlay, W Wilson, T Livingstone, and J H Sands. The secretary was instructed to write to Mr James J Harris, thanking him for the use of the field, which he had kindly granted the club during the past two years. On the motion of Mr Ross, Messrs Millar and Mackay, accountants, were accorded a hearty vote of thanks for their energy in reviving the club and making arrangements for getting the club back to their old course.” 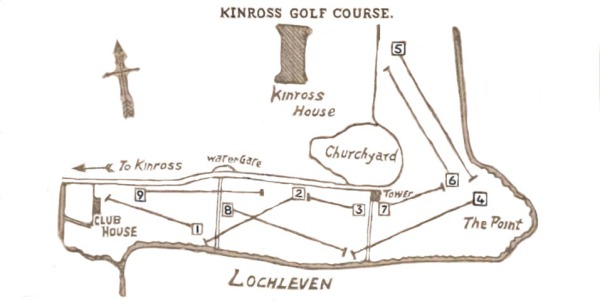 "Kinross Golf Club was instituted n 1885, but for several years has been almost extinct owing to the loss of the course at the loch-side. It has been resuscitated with a membership of about 50, and the club has removed back to the old course. which is finely situated on the shore of  Loch Leven, in the immediate vicinity of its historic castle.

The course is now a 9 hole one and is about a mile and a half long. The principal hazards are dykes and rushes. The course is only about ten minutes walk from Lochleven Station and Kinross Junction "   (Scotsman 1903)

“The Kinross Golf Club, having found their old course at Loch Leven unsuitable, have obtained a lease from Colonel Porteous of Turfhills of a fine field adjoining Kinross Junction.

Mr William Auchterlonie, ex golf-champion and professional of St Andrews, has been over the new ground and planned a nine-hole course (right). He expresses the opinion that it will be a very suitable inland course, the turf being very good.” 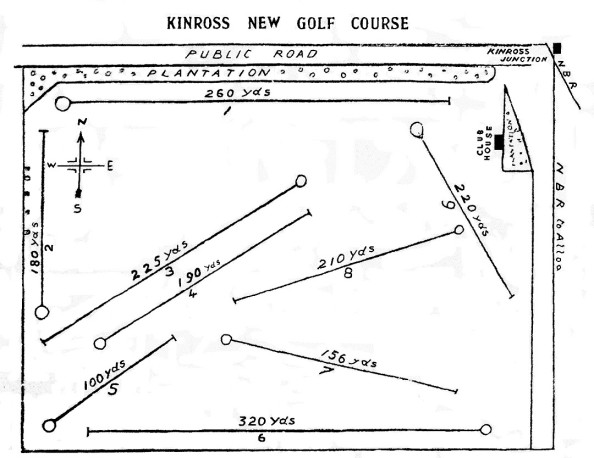 "The course is over 2000 yards in length.  The ground is flat and the hazards consist of a bog, a hedge, a dyke, bunkers, burn, and ditch. Fixtures include matches with Tillicoultry, Crook of Devon, Kelty, Canmore, Auchtermuchty, and Glenfarg."    (Nisbets Golf Year Book 1907)

“The members of the Kinross Club are to be congratulated on their excellent new nine-hole golf course, which is very pleasantly situated on the estate of Turfhills, adjoining Kinross Railway Junction, and within ten minutes’ walk from the centre of the town. The club has a membership of 110.

On Saturday afternoon a handsome and spacious club pavilion, with verandah, was formally opened by Mrs Porteous of Turfhills. There was a representative attendance of about two hundred ladies and gentlemen. Amongst those present were Sir Charles and Lady Bruce of Arnot and Colonel and Mrs Porteous of Turfhills. Mr J Ross, captain of the club, intimated apologies for absence from Lord Moncreiff and Sir Charles Adam, who had taken a great interest in the club. Lord Moncreiff had not only contributed handsomely to the club, but had presented a gold medal, for which the members would compete this season.

Open competitions were afterwards engaged on the course.”

“A game open to the four representatives from each golf club in Kinross-shire was played over Sir Basil Graham Montgomery’s private course for a cup presented by him. The winner was E H Bruce, Bishopshire, 6 down; 2, A Duff, Milnathort, 7 down; 3, J A Marshall, Kinross, 8 down; 4, A Ferguson, Kinross and A Ireland, Milnathort, each 9 down.”    (Scotsman 29.9.1913)

The club closed during WW1. 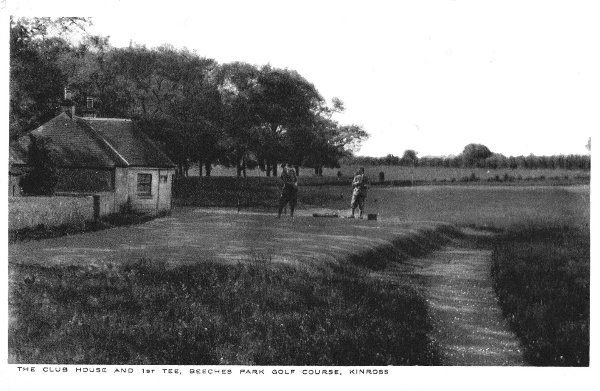 At the end of the war, Kinross Golf Club agreed terms for the lease of the 9-hole golf course, recognised as 'Beeches Park' and until then privately owned by the local 'Laird' of Kinross House and Kinross Estates, Sir Basil Graham Montgomery. 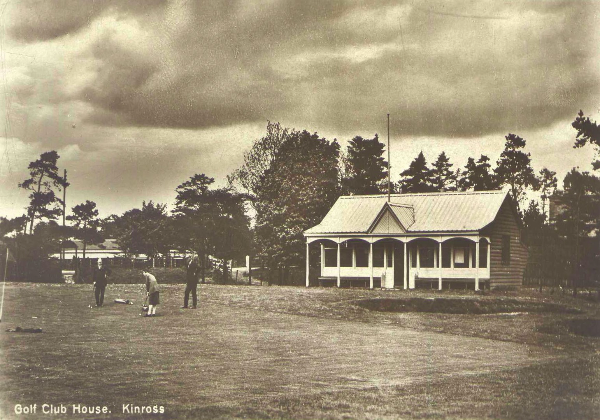 In 1932 the club moved to a new 9 hole course at Turfhills, again on land rented from Kinross Estate Company. Membership 100. The club was renamed Beeches Park GC.

In 1965 the Kinross Estate Company took over the management of the course, extended it to 18 holes and renamed it Green Hotel Golf Course.

Kinross Golf Club was allowed to use the course for an annual rental. In 1982 a further 18 holes were added with KGC granted extended rights on the two courses.