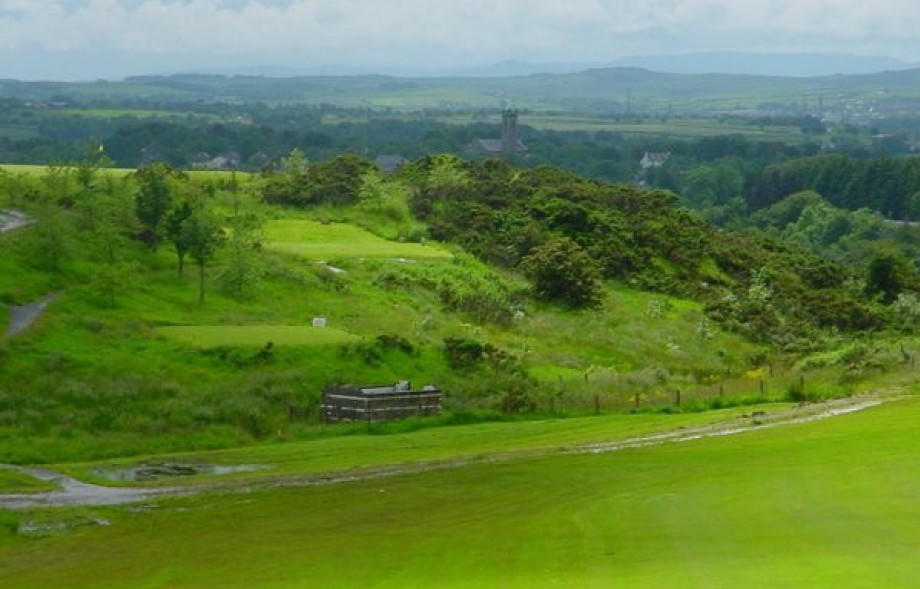 Of late a number of meetings have been held with the view to the formation of a golf club in connection with the town and the acquiring of ground in its immediate vicinity for the purpose of constructing suitable links, the result being that negotiations have been completed with Mr John F. Patrick, of Grangehall, whereby a nine-hole course has been secured on his estate. The proprietor has been appointed patron of the club, with Mr Walter Williamson, Banker, as Captain, and Mr John R. Balfour, cabinet manufacturer, as secretary and treasurer ; Dr Sneddon, Messrs M. Gilmour, Banker ; J. Foster, rector of the Academy ; A.W. Faulds, Knockbuckle ; T. Thorburn, The Linns ; D. Baird, Spier’s School ; J.S. Millar, Publisher ; J. Mellville of Crummock ; and Captain Crawford as council. The Captain and several ladies and gentlemen had a preliminary game over the course on Saturday.

The course here is now almost completed. During the week the links have been well patronised, and already Mr David Baird has established a record which will be hard to beat. Playing with Dr Sneddon and Mr Selby, Mr Baird completed the round in 37 strokes, made up as follows :- 5,2,4,5,4,3,4,7,3 = 37.

The links were formally opened on Saturday, but owing to the wet afternoon only a few completed the course. Mr Walter Williamson, writer, the Captain, was presented by the members with a handsome driver, with a suitable inscription in silver, as a memento of the occasion. Over 80 ladies and gentlemen have already become members.

The Amateur Champion at Beith

On Saturday afternoon Mr James Robb, the amateur champion of Great Britain, and Mr R. Andrew, the well known Prestwick golfer, played an exhibition match over the Beith course in presence of a large number of interested spectators. Mr Andrew was in excellent form, and went over the eighteen holes in 70, the champion taking three more. A four-ball match between Messrs Robb and Andrew, and Messrs Fulton and Foster, Beith, was afterwards played over nine holes, the Prestwick pair winning by 2 and 1.

Beith Golf Club has now completed its removal to new quarters at Fullwoodhead, where a five years’ lease has been obtained.  The course will not be fully open for play until the middle or end of  March.  The course is altogether about 600 yards longer than the old one and is also much drier and more sporting in character.

The Beith club, to signalise the opening of their new course, had arranged a gala day on Saturday, but owing to the bad weather, it was postponed till the following Saturday.

The annual competition for the Rodger Casket takes place to-day (Thursday) over the links of the Prestwick St Nicholas Club.  It is open to members of Scottish golf clubs who have attained the age of fifty years or upwards.  The interest in this event, is increasing yearly.  The entries this year number 57, and are representive of the following clubs; Prestwick St Nicholas, Prestwick St Cuthbert’, Glasgow Cathcart Castle, Licensed Victuallers’, Perth, Lenzie, Cambuslang, Cardross, Melrose, Pollok, Glasgow North-Western, Mortonhall, Troon, Invertlit, Turnberry, Western, Milngavie, Drumpellier, Kirkintilloch, Troon Portland, Bearsden, Balmore, Tantallon, Ranfurly Castle.  Possession of the gold medal which accompanies the trophy is decided by strokes in medal play of eighteen holes, the competitors starting with the handicap of their respective clubs.  Last year  Ex-Provost Templeton, and Mr A Andrew Boon, both of St Nicholas tied for the trophy and Mr Templeton allowed Mr Boon the honour.

The annual general meeting of the Troon Club was held in the clubhouse on Saturday afternoon Colonel Smith Park, M.V.O. presiding at the outset of the proceedings.  The abstract of accounts, which showed that the total increase of the reserve for the year, after providing for depreciation rents, interest, etc; was £132 12  1d, was approved.  Thirty new members had been admitted during the year, and at the close of the financial year the membership was full, with 134 candidates waiting admission.  Mr John Wishart was appointed captain in succession to Mr Smith Park, and the latter was thanked for his services.  The committee recommended that the subscription should be made £2 all round.  At present 554 members pay 30s and 132 pay £2.  The proposal was the result as from Whitsunday, 1909, but after an explanatory statement by the chairman and some discussion the proposal was defeated by 267 votes to 152.

Beith Golf Club, Ayrshire, founded in 1896, is to close in a couple of months.

The following announcement was released "At an EGM last week, the members of Beith Golf Club, one of the oldest clubs in Ayrshire, decided to wind up the club, effective in just two months time. The club, which was instituted in 1896 has suffered a decline in membership in recent years, to the point where the membership were not in a position to guarantee future losses.

The club moved to their present course in 1907, as a nine-hole layout, with the present clubhouse being opened in 1974 and the course being extended to 18 holes in 1995. Options including continuing until the end of the club year in February 2018 and reducing the course back to nine holes were considered but the membership had little appetite for the options and agreed to wind up the club. It is with great sadness that The Ayrshire Golf Association learned of the decision, which will be a real loss to the game in the north of the county and further afield and the hope is that, in some form or another, golfers in the local area will find a way to continue involvement in the game.

The Beith golf club has now turned this situation around and have managed to continue by reducing the course back to a nine hole course with additional tees for variety. ( Well Done ).