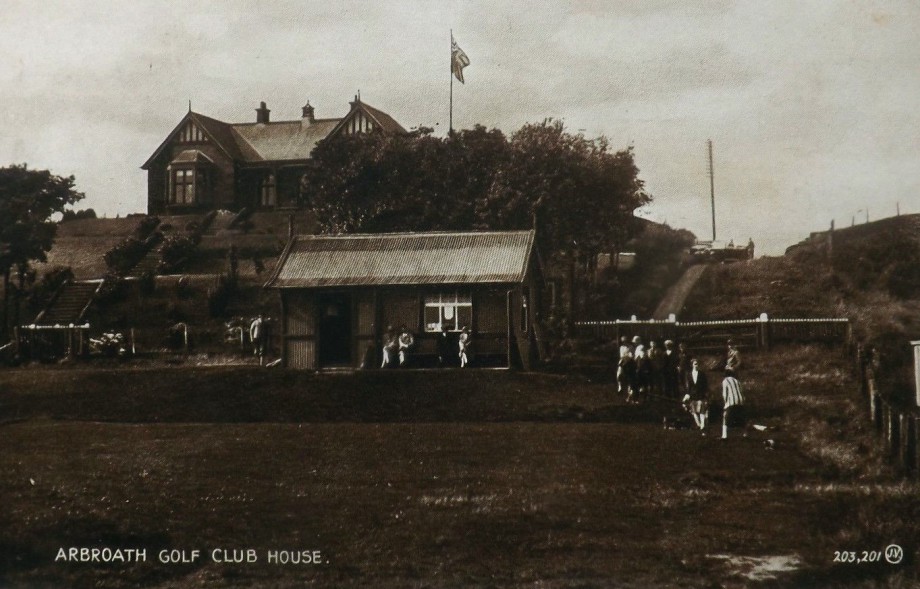 Trying to establish when the game first began in Arbroath has proved to be beyond most locals and historians. Nevertheless, when one considers that the sport was practised in the early sixteen century just down the coast at Carnoustie, it would not be unfair to conclude that something akin to the game – even in rudimentary form – was then also available on Elliot Links. What is certain is that the first club, Arbroath golf club was formed in the town in 1870; with its members being mainly professional gentlemen and businessmen. In 1903 the Arbroath Artisan club was formed to accommodate other local golfers who found that membership fees of the Arbroath club were beyond their means, and that a drinks licence had been granted for it, which was contrary to the wishes of artisan golfers.

The course has always been on Elliot links, though six holes of the first layout from 1878 were on the South – Eastern side of the railway line. The obvious dangers therein led to its being reduced to nine holes, but in 1903 the council, with much help from the club and local golfers, bought the links on behalf of the town and the course – basically as it is today – was laid out with the help of James Braid. The present clubhouse has always been the home of the Artisan club, the Arbroath club having built its clubhouse above the first tee; it is now a guest house, having been sold in 1985 when that club folded and the proceeds were distributed to club members. In contrast, a range of improvements has steadily upgraded and improved the Artisan’s building to create excellent facilities for both members and visitors.(ACGA) 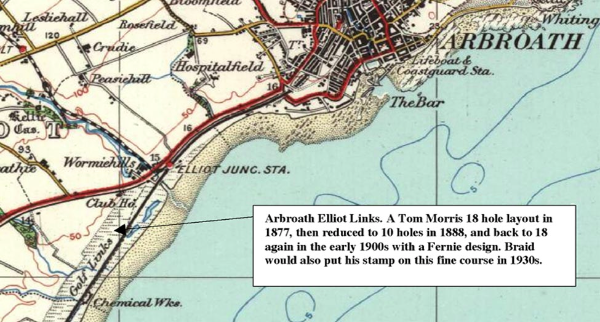 In 1877 Tom Morris was asked to survey the Arbroath Links and give his opinion as to its suitability for a golf course, and on the 9th of March 1878 it was officially opened. “The course prepared for the Arbroath golf club was formally opened on Saturday afternoon by the Captain, Mr Charles W. Corsar of Seaforth. There were a considerable number of persons present, not withstanding that the weather was cold and wet. Before driving the first ball, Mr Corsar said, that at one time, many years ago, Arbroath had a course and a club, but the former had been cut up and the latter dispersed by the advent of the railway. The members of the club were now old men, and but for the zeal and enterprise of a few enthusiasts it was probable that Arbroath would never have had a course again, or at least, not for a long time. By the exertions of these gentlemen a course, which Tom Morris had pronounced a good one, had been obtained.

It was, however, mainly through the kindness of Mr Bowie, Mains Of Kelly, and Mr Swan, Inverpeffer, that they had been able to do so – the course being on ground tenanted by them, and to these gentlemen, along with the Earl Of Dalhousie, the members of the club were very much indebted, and they deserved three hearty cheers. ( Loud and continued cheering ). The game, he assured the new players, was an excellent one, and would afford them capital amusement and health giving exercise. Mr Corsar then drove a ball, and declared the course formally opened and wished the members a pleasant game. Fifteen couples started, among the players being Mr Corsar, Mr Lindsay Carnegie of Kinblethmont, and Mr Claud C Carnegie, Yr. of Seaton: also Tom Morris, St Andrews, and Bob Dow, Montrose, Professionals. There are eighteen holes in the course, which extends within a mile or so of Easthaven, and until it has been used for a time the putting greens will necessarily be rough. The professionals missed two holes, and came in – Morris at 78 and Dow at 85. Of the members of the club, Mr Kyd, Teacher, came in lowest – 92.

The Arbroath golf club may now be said to have got a start, and a good one. The membership is numerous, and there seems no want of enthusiasm. The Captain has, it is understood, presented the members with a handsome and expensive medal for which to compete.

“The course is quite near to Elliot Railway Station, which is about two miles from Arbroath.  It lies to the north of the railway, and consists of ten holes, the furthest out six being twice played to make up the orthodox eighteen. The round of ten holes is about one and a half miles long, and the full course nearly three miles. The hazards are numerous and varied. Play can be enjoyed during the whole year.” (Golfing Annual 1888-90)

The Course remained much the same until more land was purchased and in 1907 Mr Willie Fernie of Troon was employed to redesign the layout. It was not until 1931 that the great James Braid was employed to redesign the bunkering and his layout has not altered a great deal since. Arbroath Golf Course is a deceiving links course at first view. It appears to offer flat open fairways, however, in true links style the undulating greens are well protected by testing bunkers.