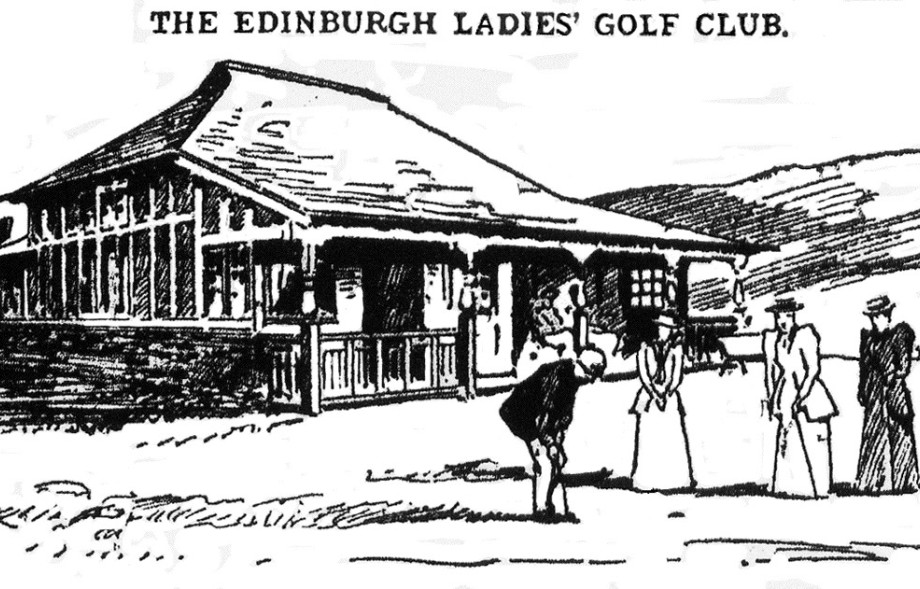 Edinburgh Ladies' Golf Club.  Inst. May 1894.  “The Edinburgh Ladies Golf Club has a new green on the south side of the city. .A short time age, the movement for the institution of the club and the laying out of the course took shape at a meeting of gentlemen, a number of them keen and well-known players; and so heartily was the idea taken that there are no fewer than 150 lady members. The club is not restricted to ladies. Gentlemen are admitted as honorary and at the same time playing members. Of these there are at present as many as a hundred; and further admissions are not being made in the meantime, though it will probably be arranged that the number of honorary members be increased by twenty-five. At the same time, as the green is intended mainly as one on which the ladies may enjoy the game under the most favourable conditions, it may be taken for granted that at no time will the course be taken advantage of by honorary members to their exclusion. The course differs from the majority of ladies’ greens in that it affords scope for more than short play. Few of the holes are so short that the green can be reached with a ‘wrist iron’; the greater number of them are a full iron stroke; one is a full drive and an iron stroke. With good golf the round would be a 44. Much care has been taken with the greens. As the ground is under old pasture, no turfing has been necessary; and to bring the greens into good trim, they have been repeatedly mowed and rolled, with the result that now, on the eve of the opening of the course, they are in remarkably good order.”   (EED 16.5.1894) 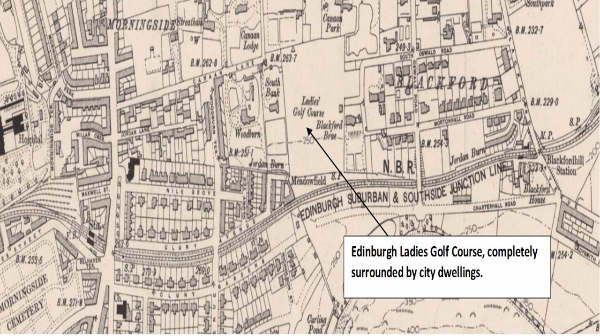 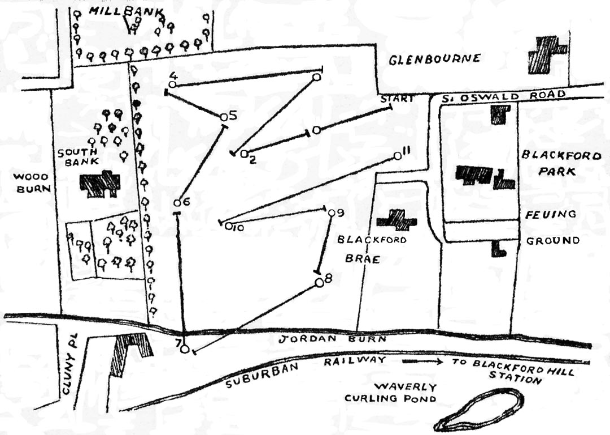 “It is recorded that Edinburgh Ladies Club conducted annual friendly matches against a Craigmillar Park mixed team this association having commenced in 1896. Despite the misnomer Edinburgh Ladies, there were in fact gentlemen members. In 1914 out of a committee of 13, six of these were men, most or all of whom appeared to be spouses or relations of existing lady members. Was it the ladies themselves or the husbands, footing the bill, who thought the club could not possibly run efficiently without the male guiding hand? Whatever the reason, it must have been quite a sight to see the ladies playing in their club colours – red and green ties and hat ribbons, matching the red coat with green facings.” (MCLGA)

"A 9 hole course.  The putting greens are good, and for hazards there are a number of artificially formed bunkers, and a wall crossed twice." (NGYB 1907)

"The question of turning the course to purposes of food production has been the subject of division in the Edinburgh Ladies’ Golf Club.  It was decided at a meeting of the Club recently to offer the use of the course for grazing only, and the refusal to accede to the Corporation’s request for the ground for allotments has brought about the resignation of the former committee and joint hon. Secretaries.  Mr H.Inglis Lindsay and Mr H.M.Rush.  At a meeting on Tuesday a new committee and interim secretaries were appointed.

The position created by the Board of Agriculture’s decision will be considered by the Allotments Committee of the Town Council to-day"   (S3.3.1918).