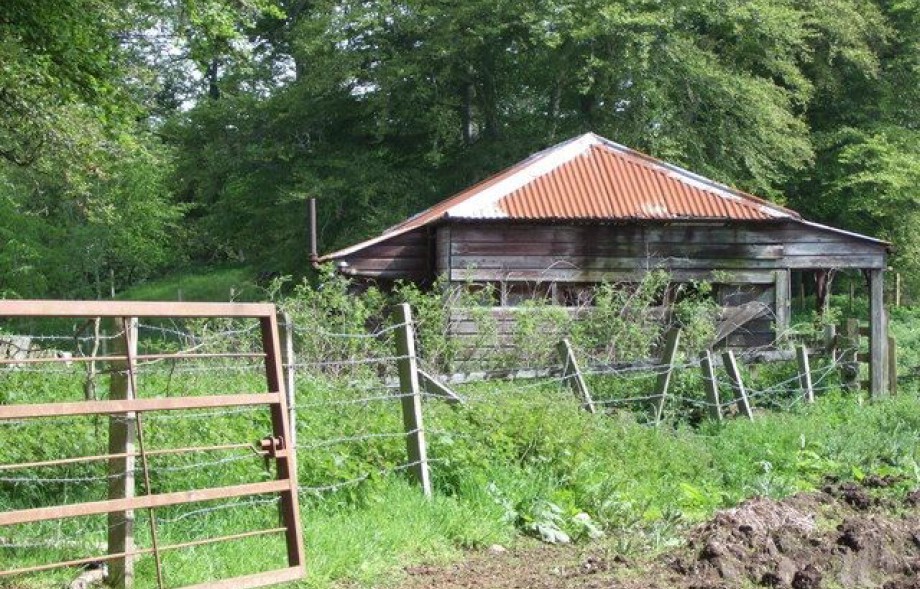 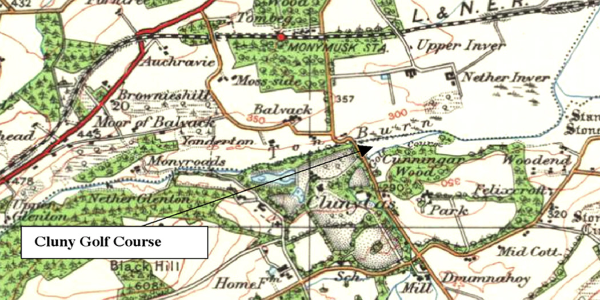 Cluny Golf Club.  Instituted 1906.  Originally a private 9-hole course in Sir Reginald Cathcart's grounds at Cluny, one mile from Monymusk station, it was opened to local golfers. “Sir Reginald Cathcart having kindly granted permission to use the private golf course in Cluny grounds, a club was recently formed for the parishes of Cluny, Midmar, and Monymusk, with Sir Reginald Cathcart as Honorary President, Mr Ranald R. Macdonald was appointed President ; Mr Nicholl, Vice President ; Mr Alexander, Captain ; Mr Chrighton, Secretary and Treasurer ; and a committee representing the three parishes. The members have been using the course for some time, but the formal opening took place on Saturday in beautiful weather. The course, which is opposite the North Lodge, is picturesquely situated with fine woods around it, and is sufficiently diversified to try the skill of the players. At three o’clock a large number of ladies and gentlemen had assembled, and, in the absence of the president, who had been unavoidably delayed in town, Rev P Taylor called on Mr Alexander, the captain, who has taken a great interest in the formation of the club, to make a few remarks. Mr Alexander expressed regret at Mr Macdonald’s absence, and went on to explain the steps which had been taken in the formation of the club. The golf fever had invaded every corner of the land, and though a few enthusiastic golfers in the district used to go occasionally to Aberdeen to enjoy a game, there was no opportunity for a large number to have that enjoyment within reasonable distance till now, when by Sir Reginald’s kindness that course was open to them, and the large number who had eagerly taken advantage of it showed how much the privilege was appreciated. Tea and strawberries were then served at tables under the trees by the following ladies – Mrs Macdonald, Mrs Taylor, Mrs Crighton, Mrs Allan, Mrs Duncan and Mrs Macleod, after which the company was photographed. All then went to witness the driving of the first ball by Mrs Macdonald, which she accomplished with a dexterous stroke, which sent the ball well up to the green, and earned hearty applause. A number of foursomes were then arranged, and in the fine evening, play went on with great zest for several rounds.”

The club closed with the onset of WW1.

The formal opening of the Cluny Golf Course took place on Saturday afternoon. A record gathering assembled, the weather being ideal. A mixed foursomes  competition was played. Mr Charles Allan, Tillycairn, and Miss Helen Forbes, School Croft, carried off the first prize. Owing to the war the golf course has not been in use for several years, and in consequence was very much out of order. A special vote of thanks was accorded to Mr James Burnett, Monymusk, who has spared neither time nor energy to renew the greens. A number of ladies and gentlemen were added to the membership, and the golfing season promises to be a favourable one.

An attractive pavilion, erected by the Cluny Golf Club and admirably equipped was declared open by Mr C A Linzee-Gordon of Cluny.  The pavilion is a substantial wooden building, built on a solid concrete foundation. It contains beautifully lined cloakrooms for ladies and gentlemen, with tables and chairs, stove, wash basins, and lockers. Mrs Allan, who presided, welcomed the company, and particularly their Laird and Mrs Linzee-Gordon, whom they were delighted to see among them again. They were fortunate in Cluny in having a golf course set among beautiful surroundings, and for that privilege they owed so much to their Laird, who gave them the use of the course free. Mrs Allan, referring to the Club’s efforts to provide some suitable cloakroom or clubhouse, made special mention of the generous support given by ,Mr Linzee-Gordon, who had not only given a handsome donation in money, but had provided the material for the base of the building, along with all home wood required. Another kind patron was Mr Moncreiff Paterson of Tilliefoure, who, on being informed of the type of building proposed to be erected, gave a handsome donation which enabled the Club to go ahead with the work. Others had contributed, and the financial difficulty had been obviated. The building cost £120, and for a Club whose membership did not exceed sixty to have raised the necessary funds was an achievement of no mean character. After tea, prepared by the ladies of the Club, mixed-foursomes were played 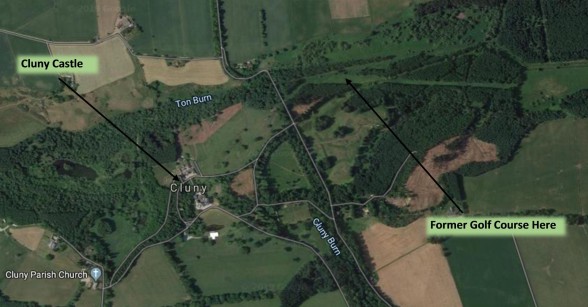