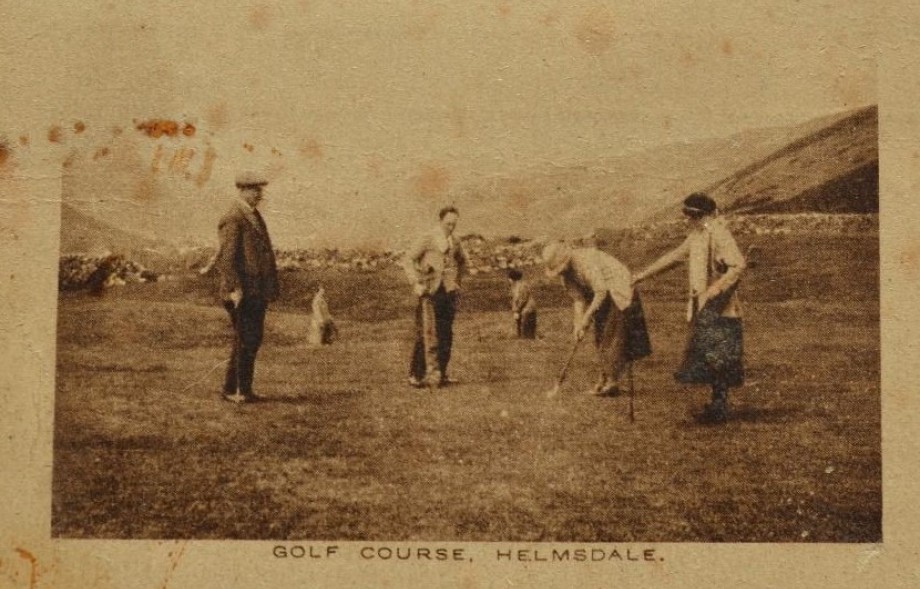 An Early View Of Helmsdale 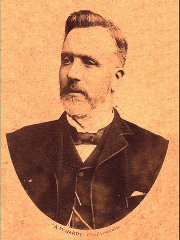 Yes, you might well ask, who the hell was Alexander McHardy. In my humble opinion, he was the leading Scottish golf course architect of his day, laying out no fewer than 90 odd courses, in fact, i am not entirely sure how many he actually laid out in his career. Here is my tribute to him. This man has got to be the subject of much more research, and if anyone, whether it be family decendants or whoever, has any information on Mr McHardy, then i would very much like to hear from them.

The names of Scottish golf course architects trip off the tongue both because of their creations both at home and abroad. Willie Auchterlonie, James Braid, Willie Campbell, Willie Dunn and his brother James, sons Tom and ‘Young’ Willie, and his grandsons John Duncan and Seymour, Willie Fernie, ‘Old’Tom Morris, Willie Park Junior, Donald Ross were the most prolific, and there were many others, usually local professionals, who laid out a lesser number in their own surrounding areas.

In Scotland particularly, James Braid designed some 45 courses, although he redesigned and altered many more. ‘Old’Tom Morris laid out 42 and also redesigned many more, and Willkie Fernie 32, with Willie Park and Ben Sayers responsible for around 18 each. Yet there is one man, as far as is known, completely unrecognised who, according to his obituary, was responsible for laying out over 100 courses. This by a man whose chosen career was that of a police officer - Alexander (Alister) McHardy.

Following his death, the Inverness Chronicle, on 2nd May 1915, carried the following tribute:

The qualities which Mr McHardy displayed in Sutherland as a young man, remained with him to the end. In the very year of his appointment, 1866, the late King Edward, then Prince of Wales, and the Princess of Wales, paid their first visit to Dunrobin. In making the police arrangements on that memorable occasion, and in dealing with the crowds which gathered in the ducal grounds, Mr McHardy showed himself singularly happy and efficient. Riding on a handsome pony, dressed in a becoming uniform, he was to be seen everywhere, smiling, courteous, capable, and firm, keeping the ring, so to speak, without causing any annoyance to any of the eager populace. It was this combination of qualities that made him so acceptable to Royalty, and to the common people. The late Duke of Sutherland – who at first, we believe, favoured another candidate for the Chiefship – came to rely on Mr McHardy with complete confidence, and to honour him with his friendship. The Prince of Wales extended to him a similar privilege. Mr McHardy was in Sutherland during all the visits of the Prince to Dunrobin, and when the Prince became King, his Majesty was delighted to meet Mr McHardy again as Chief Constable of Inverness-shire. In his relations with the chiefs of Executive Departments, during the crofter troubles on our own county, Mr McHardy had sometimes to take up a position of his own, which he did with his accustomed suavity, but with perfect self-reliance. The discussion of disputed points invariably showed the soundness of his judgement, and won the admiration of the authorities.

To officials in the position of Mr McHardy there is no opening in the ordinary life of the community. Fortunately he had the tastes which made him a pioneer and leader in the game of golf. He was, in fact, by constitution a sportsman, broad-shouldered and athletic. He took pleasure in every kind of physical exercise. A man of splendid physique, he was in his early days one of the finest athletes in Sutherland, and competed with success at many of the Highland Gatherings. On one occasion – in the early sixties – he stood second to Donald Dinnie, the World Champion, in the hammer and stone contest at the northern Meeting Games.

A native of Braemar, he joined the Aberdeenshire police in 1858, and in 1861 was transferred to the Fifeshire police, in which he was to become Deputy-Chief Constable. During his stay in Fife he acquired a love of golf, which he carried with him to Sutherland in 1866, when, in addition to his police duties, he became Secretary of the Sutherland Golfing Society. The fine possibilities of the Dornoch links appealed to him, and he was not satisfied with having these links merely as a playground for himself and a few friends. so he applied for permission from the Royal Burgh of Dornoch for members to play golf over that part of the links of Dornoch which was the property of the Royal Burgh. Permission was granted on 9 November, 1877 "Such permission being held by the society at the pleasure of the Magistrates and Town Council, who hereby reserve to themselves power to withdraw the same at any time if so advised." Permission was not given to the burgesses of the Royal Burgh to play golf over the patrimonial lands of the Burgh, such permission being unnecessary because they had played golf over those lands from time immemorial. Permission was given to the Society, some of whose members may not have been burgesses, to play golf over the links. So the Dornoch Golf Club was born. The people of Dornoch were at first slow to see the merits of the game, but before Mr McHardy left the northern town he saw the course well laid out and the local club in a flourishing condition. This was the foundation of Dornoch’s prosperity. Mr McHardy considered that golf had been a boon to himself in carrying out the groove of official routine, and filling up his leisure hours. His enthusiasm was a genuine, honest enthusiasm, as he believed in the great value of the game, for health, for mental invigoration, and good fellowship.

In 1882 he moved to Inverness to take charge of the County Police there and the following year he was one of those who attended a meeting to establish a golf club in Inverness. He was elected Club Captain of the fledgling club in 1884, a position he was to hold for 21 years, and President for a term, his relations with all the members being throughout of the most cordial character. To most of them his death was a personal loss. The Club moved into Culcabock (still its home) in 1886. Unfortunately, Mr McHardy died before the 9-hole course was extended to 18 holes in 1914. Since he came to Inverness twenty-nine years ago, the game, largely through his efforts, has become so popular and profitable. It is believed that, at the request of club committees, he has planned fully a hundred courses all over the country. As a player, Mr McHardy was a long driver and an excellent all-round golfer. He was also an accomplished angler, and an expert bowler and curler. He held office in the Inverness Curling Club, and gave admirable service in connection in connection with the bonspiels in the North. He also attended very regularly the meetings of the Inverness Field Club, and was president for a term.

Mr McHardy was appointed Chief Constable of Inverness-shire in 1882, and lived to be the oldest officer in the police service. He died in harness at the age of 72. At the time of his appointment to the county of Inverness, the agrarian outbreaks in Skye caused great anxiety to the authorities, If they were ultimately calmed down. A good deal of the credit was due to the homeliness and tact of Mr McHardy, and his knowledge of Highland character. Quiet, firm discipline was exercised by him over his police force, with considerateness for the men personally that won their hearts.

It was regarded as a public tribute to Mr McHardy’s services when in 1895, he was appointed a member of the Departmental Committee on Sheep Stealing in Scotland. Higher tributes were in store for him. When the late King Edward visited Mamore in 1909, his Majesty presented him with the Member of the Royal Victorian Order decoration, MVO, this interesting little ceremony taking place aboard Mr Bibby’s yacht. In July of last year Mr McHardy was summoned to Marlborough House to receive the King’s Medal at the hands of King George. The Chief Constables of Scotland were much gratified by the honours conferred on Mr McHardy, and they elected him as President of their Club for a second term. Two years ago the Club, of which he had been a member for 38 years, presented him with an illuminated address on the completion of fifty year’s service as a police officer. The officers and men of the Inverness-shire Constabulary showed their respect for their chief in January 1901, when Deputy Chief Constable Chisholm, now Chief Constable of Sutherland. Presented him, in their name, with a large framed photograph of all the members of the constabulary. He was presented with a gold watch at the conclusion of his captaincy of Inverness Golf Club.

The deceased is survived by Mrs McHardy and by two arried daughters, the younger of whom is the wife of Mr Chisholm, Procurator-Fiscal, Lochmaddy. They have the sympathy of many old friends in their great loss. Mr McHardy, Chief Constable of Dunbartonshire, is a brother of the deceased.

The funeral will take place on Wednesday at 2pm, from the Roman Catholic Chapel to Tomnahurich Cemetary. (IC 2.5.1911)

What can be made of the assertion that he was responsible for over 100 golf courses? Operating as he did in the extreme north of Scotland, Caithness, Sutherland, Ross & Cromarty and Inverness, it is hard to see how this sum could be amassed. These are, generally, large in area but sparse in population. To date, our research has so far verified 38 courses which he laid out. However, experience suggests that there could be considerably more. A lack of early records means that a number of clubs cannot say who designed their courses, but given that there were few experienced professionals in the region, and that Mr McHardy already had a good reputation as a designer, there is every possibility that he was called in; there are over 25 such clubs. Also, he was a good friend of the Duke of Sutherland and other landed gentry, and so it was likely that his help would be sought in laying out courses on private estates. These are much more difficult to identify as often their existence is only established by a casual mention in a newspaer. It is thus unlikely that the final number of courses he laid out will ever be established. And if the reputed 100 seems over generous, odd comments suggest the number may not be far short:

“Mr McHardy, Inverness, who has now laid out over eighty courses during his life as a golfer, has recently visited Nigg and laid it out for an eighteen-hole course. Up till now it has been a nine hole course.” (NC 11.11.1908)

So where does Alexander McHardy stand in the pantheon of golf course architects? If only the current 38 courses are credited to him, it gives him significant standing, but if anywhere near a majority of the reputed courses could be verified, he would be lifted into the front rank. It could be argued that the courses he laid our were simple courses which, in a number of cases, were duly redesigned in later years, but this would be a facile view. He had to contend with some wild country quite unlike the softer land  in the south, and he brought the game to people who, because of their remoteness, had little else in the way of recreation. After all to have the golfing eye to recognise the potential, and to select and arrange the nine holes which were, in due course, to become Royal Dornoch. must establish Alexander McHardy among the leaders of the golfing architects.

In loving memory of

For 21 years Captain of the Inverness Golf Club

This stone is erected by golfing friends in Inverness

and the North of Scotland as a token of their esteem

For him as a loyal friend and a true sportsman