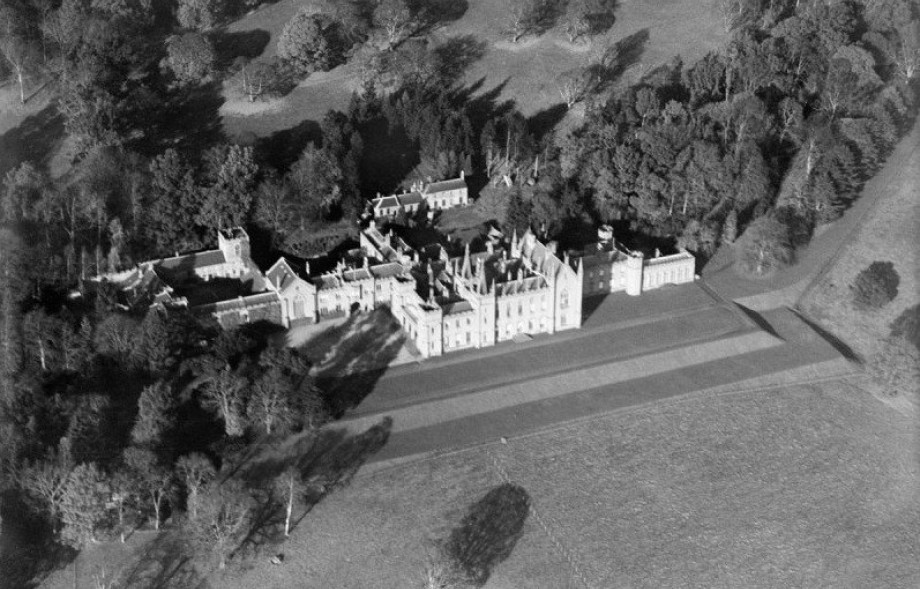 Rossie Priory from above.

The following private courses heve been found in Angus:

Glamis Castle. A 6-hole course, in the grounds, in use certainly between 1906-13. The photograph shows Lady Elizabeth Bowes-Lyon, later Queen Elizabeth, having golf lessons from the well-known Scottish amateur Leslie Balfour-Melville in 1913. 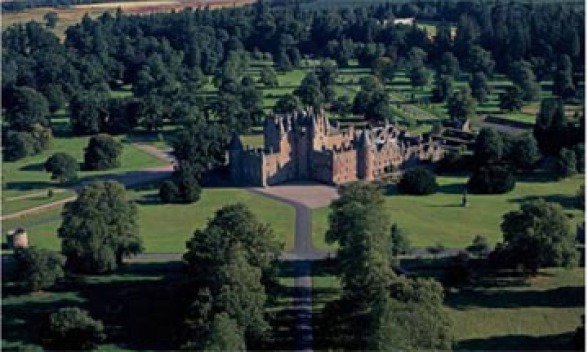 Millden Lodge, Edzell. A 9-hole course in the grounds, in existence in 1906. The estate was owned by the Duke of Roxburgh, who had courses laid out on his estates at Floors Castle, and at Drumlanrig Castle. 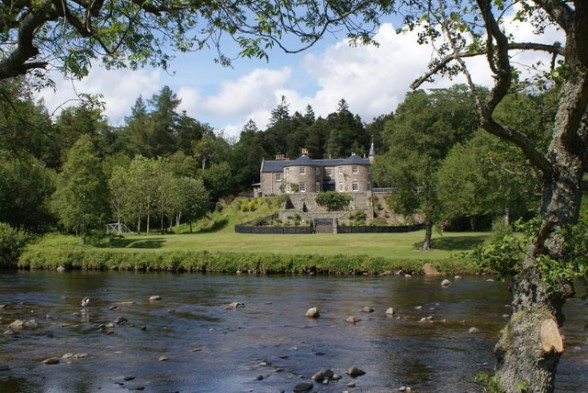 Rossie Priory.  "Bob Simpson of Carnoustie visited  Rossie Priory last week at the invitation of Lord Kinnaird.  He found the ground very suitable for golf and will now prepare a plan of the course for his Lordship's approval .  While at Rossie, Simpson laid out a Ladies' course of 9 holes on a beautiful piece of turf in front of the lawn."  Source: Golf 26.4.1895 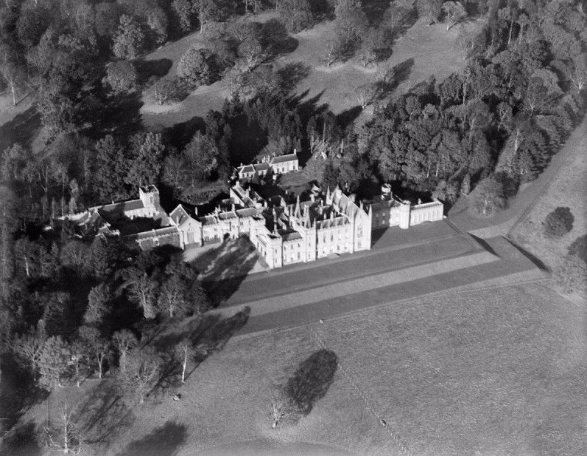 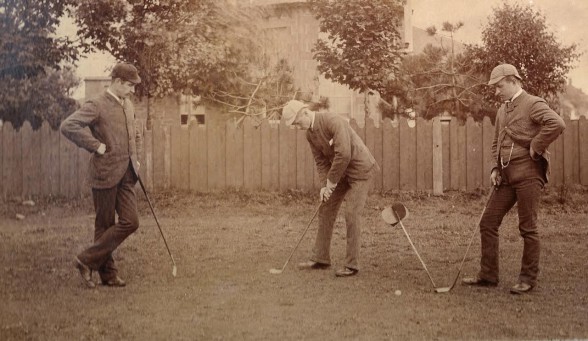 Simpson Brothers of Carnoustie. Bob laid out the course at Rossie 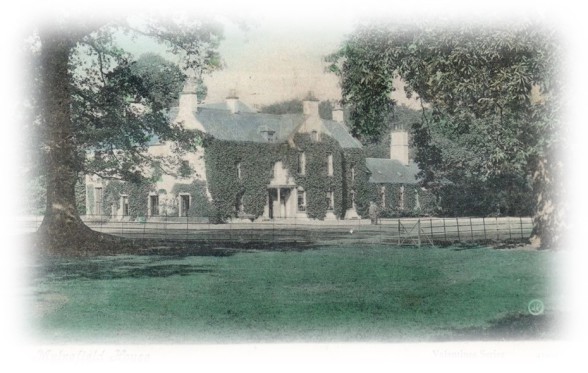 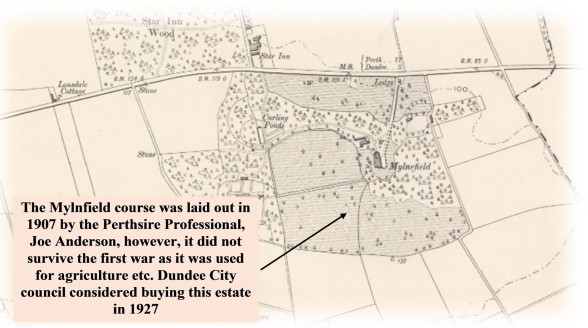 Carse Estate As A Golf Course Project To Acquire Mylnfield

Troublous Times Recalled A scheme is being promoted to acquire the small estate of Mylnefield, in the Carse of Gowrie, at present the market, and lay out on a modern 18-hole golf course, utilising the beautiful mansion as a clubhouse. The estate, "which is situated to the west of Invergowrie, and extends to 218 acres, is bisected by the Dundee-Perth Road, so that in the event of the course being formed players could reach it conveniently from east or west motor 'bus or motor car. The idea is to utilise for the course the policy parks, which have for generations been in grass, 29 acres of farm land on the eastern portion of the estate, south of the Perth Road, and also 35 acres north of the Perth Road, extending down to the Fowlis Burn. A field to the west, on the south side of the Perth Road, and two fields on the north side, immediately to the east of the Star Inn Farm, would be left for agricultural purposes. At one time there was a private nine-hole golf course on the policies south of the mansion house. From here there is magnificent view of the river, the Carse, and the hills beyond. Negotiations with regard to the project have already been opened. When Mylnefield was Sacked. The house of Mylnefield was built in the seventeenth century, and had probably belonged to the proprietor of Pilmore, Alexander Mylne, minister of Longforgan, of whom it is recorded in the Glamis Book Record" that he provided a bed for Patrick, first Earl of Strathmore, when that impoverished nobleman took residence in the then half ruinous Castle Huntly. In 1773 the house was sacked, after a fierce fight with the servants, by mob from Dundee, who had got the notion that i grain was being hoarded the owner, Thomas Milne. Part of the structure was demolished, fine furnishings were smashed, and silver plate and other valuables looted, the damage being afterwards assessed at £403 in the currency of that day. While the mob wrought havoc at Mylnefield the bells of the Parish Churches in the were ringing the alarm, and farmers and ploughmen armed themselves with weapons of all sorts. Those volunteers made for the scene, but on being told that the rioters possessed firearms, they showed discretion by waiting oonsider what should be done. At this juncture interesting figure appeared. This was Colonel Duncan of Lundie, the elder brother of the famous admiral. Rev. Dr Adam Philip, historian of Carse, has done service in briefly biographising this soldier scion of the Duncans of Dundee. Colonel Duncan had made himself famous while campaiging in Canada, and his qualities are preserved in the heroic character of " Major Duncan in Fenimore Cooper's romance, the Pathfinder." Strategy. In Colonel Duncan sturdy.but perplexed forces opposed the rioters Mylnefield found a strategist. Anxious to avoid bloodshed, the colonel induced "the farmers and ploughmen to discard their firearms, and he then led the advance,. Arrived at the house he adopted the plan of riding close up to the mob, shouting to those with him to let rioters alone they would dealt, with by the military ready to intercept, their return to The stratagem succeeded. The passion of the mob was overwhelmed by dread, and they broke, leaving some prisoners behind. The sombre story developed a happier phase. Among the defenders of Mylneneld was Robert Graham of Fintry, and him along with Colonel Duncan, the county of Forfar voted thanks. would seem (that, Mr Graham's gallant service had been directed more than a sense of duty, for soon after the sack of Mylnefield he married at Dundee daughter of the house. Peggy Milne was presumably a rich reward. A Link with Coaching Days. Star Inn Farms on the estate of Mylnefield, preserves a link with coaching days. Its name dates from the time when the farmhouse was an inn ministering to travellers by the coaches passing on the high road between Dundee and Perth, which then at parts lay north of the present highway, winding along the uplands at Longforgan and through what are now the parks of Rossie Priory. A century ago—and even considerably later —the Star Inn neighbourhood was rife with peril for travellers. Nearby, where woodlands massed, footpads were to be expected. A point in the road still called Howe o' the Goat was notorious as the lurking place of desperate characters prepared to hold-up wayfarer at the risk of hanging or transportation. A solitary traveller had need for courage. Farmers with full purses generally faced the road together. The late Mr Henry Prain, Longforgan, who when a nonagenarian, retained clear and vivid memory, could retail (stories of encounters at the Howe o' the Goat. himself had been attacked, but had beaten off his assailant.