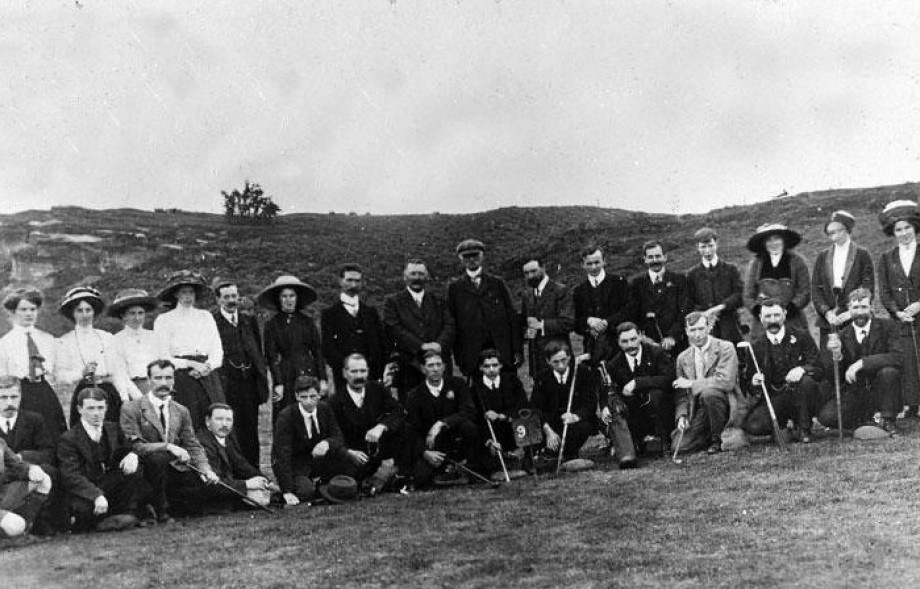 Coalburn Golf Club.  Instituted 1912.  A course on the lands of Westtoun, adjoining "Wallace's Caves".  Owned by Mr Greenshields, the land was given free of charge to the club.

"Coalburn can now boast the possession of a golf course, and that of no mean order. It is situated on the lands of Westtoun, ad­joining "Wallace's Caves", and the course, with it's immediate surroundings, furnishes ideal conditions for the enjoyment of the royal and ancient game.

The interesting ceremony of formally opening the course took place last Saturday afternoon. The weather unfortunately, broke down earlier in the day, in consequence of which the attendance was much smaller than would otherwise have been. However, there was a fairly good turnout of members and friends, including Mr James Hamilton of Westtown, Mrs and Miss Archibald, Messrs Archi­bald and Blackwood, Greenshields and Fox.

Mr A.T.Blackwood, president, in his introductory remarks, gave a brief account of the origin of the club, which, he pointed out, was formed as the result of a general feeling in the district that some sort of recreation might be provided for those who were unable to participate in football, which was fairly well catered for. He proceded to emphasise that the difficulties which the promoters foresaw  in connection with the forming of golf links were almost completely eliminated when, on approaching Mr Green­shields with a view of aquiring a piece of ground, he was not only willing to grant the ground, but he offered it free of charge. This munificence on the part of Mr Greenshields made the work of preparing the course comparatively easy. Mr Blackwood also wished to thank the colliery companies and other friends who had lent assistance.

Dr Robertson, vice-president, thereafter presented Miss Green­shields with a silver cleek, golf ball and stand, asking her to look upon them as a token of esteem from the members, and as a momento of the auspicious occasion. Mr Greenshields, in his reply on behalf of Miss Greenshields, expressed his pleasure at being present, and wished the club every success. Miss Greenshields then opened the course by driving a capital ball from the first teeing ground, amidst the applause of those present.

Thereafter the company was entertained to tea by the lady mem­bers, after which, the rain having cleared off, a most enjoyable match, president v vice-president, was entered upon, and resulted in a draw, each side claiming the same number of wins.

Thus was inaugurated what is hoped will be not only a success, but a boon to the district.

The membership is already well over fifty, and the secretary hopes to add still more to the list before the close of the season." (HA 3.8.1912) 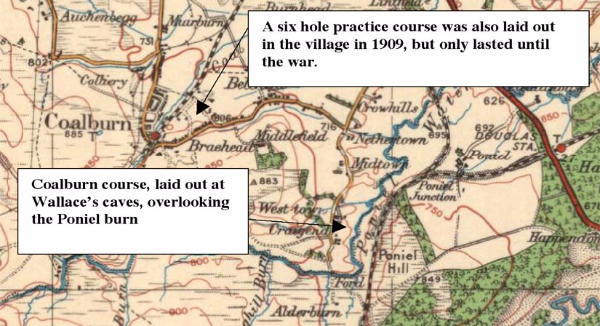 Closed 1916. Most of the members were killed during WWI An effort in 1921 to revive the club on a 6-hole layout was unsuccessful.