Sanday Golf Club.  First mention 1906.  A 9 hole course at Geramond. “There was a nine hole course at Geramont and probably on the Backasaill Links as well in the 19th century, but when we played on the former course in 1905/06, it was in the process of going out of business. If it has not been ploughed up it should still offer a very suitable and sporting venue for a golf course. it is on record that the members of the Orkney Golf Club played a game with the Sanday players on an occasion when the weather became so bad that they could not return, and this caused a meeting of the Kirkwall Town Council to be cancelled.”

Recently a course has been laid out at Rusness, but has not been supported to make it a success. 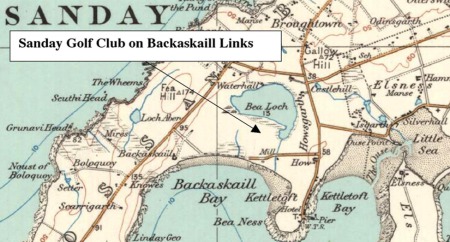 This course was located at a beautiful spot along the shore of Backaskaill Bay on Sanday Island.