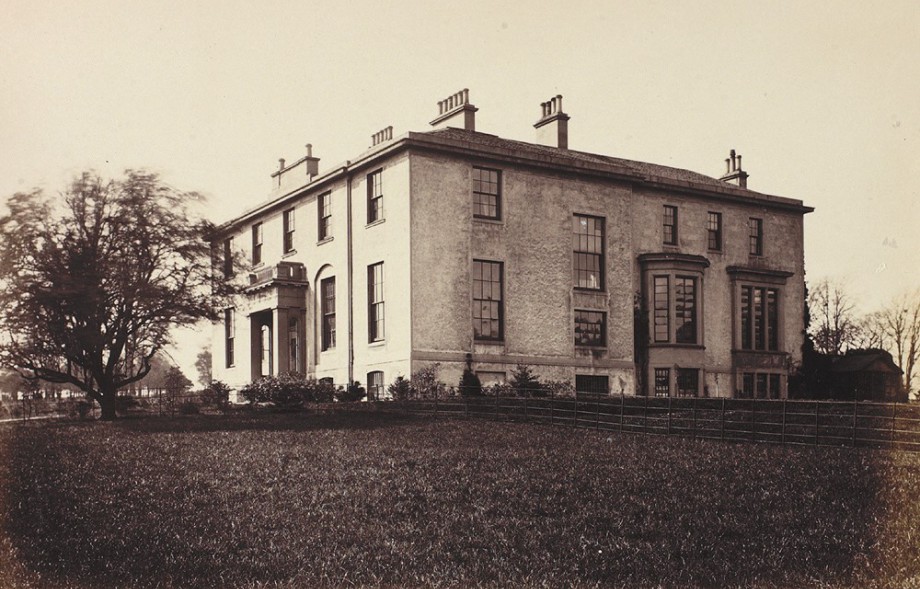 North Western Golf Club.  Instituted 1896.  Originally a 9-hole course at Gilshochill, it was extended to 18 holes in 1900.  In 1901 the club moved to an 18 hole course at Ruchill, 10 minutes from Maryhill station.  Ruchill Mansion became the clubhouse while the wooden clubhouse from the old course was transported to the new and placed alongside the 15th hole to be used as a tool-shed.

In 1928 the club was dispossessed of its ground by the Greater Glasgow Housing association for housing development and the members joined with those of Bankhead GC to form Hilton Park GC.  The course was taken over by the Corporation , reduced to 9 holes, and remains open today as Ruchill Park Golf Course.

"At a meeting held in Maryhill last night, it was agreed to form a golf club in Maryhill, to be called " The North Western Golf Club."

The ground consits of 49 acres, suitable for a nine-hole course, and is situated on Gilshochill Estate. One hundred and twenty names have already been enrolled." (EEN 6.11.1895) 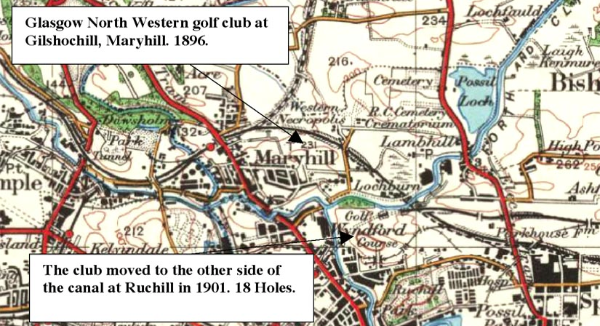 "Nowhere in Britain has the golf boom been so pronounced as in the Glasgow district.  A dozen years ago the courses round about the city could have been counted on one hand, now there are a score, within a radius of seven miles from the Royal Exchange.  Not the least interesting of these is the eighteen-hole links of the Glasgow North Western Club at Ruchill.  Half a century ago Ruchill mansion and grounds were well beyond the limits of the city, but so rapidly has Glasgow developed that its tentacles, have already reached this once charming rural resort.  While the immediate surroundings are less sylvan than they were the glorious prospect to the north and south-west is unimpaired From the third hole, which is 300 feet above the level of the sea, a truly magnificent view is obtained of the Campsie and Kilpatrick Hills, and the towering peaks of Ben Venue, Ben More, Ben Lomond, Ben Lui, and other well-known mountains.  Looking down the valley of the Clyde the beholder’s eye is arrested by the bold out line of Goatfell and the rugged ridges of the Argyllshire Hills.  The Forth and Clyde Canal bounds the course on the north and west, while Ruchill Hospital and Park come between it and the city on the east.

The ground is hilly, but the holes have been so skilfully laid out as to call for the minimum of climbing.  Although the soil is heavy, an excellent coating of turf has been cultivated, due to judicious manuring and top-dressing.  The putting greens are wonderfully good.  While sand has been used freely, the best results have been obtained from carbon refuse.  This material is coarser than sea sand, but it is an admirable fertiliser and fills up with the greatest nicety all the little inequalities in the turf.  Another noteworthy feature of the Ruchill course is the excellence of the tees.  Where the ground is not level, two, and at some places three, driving off places have been made.  The committee are firm believers in the principle that there should be no hazard on the tee.,

As modern links go the course is not a long one, the total length being 4,896 yards, but it boasts of several thoroughly sporting holes.  There is no scarcity of hazards, the principal ones being walls, hedges, and trees.  Straight driving receives its proper reward, while the approacher gets value for all his accurate shots.  The first hole is distant 180 yards, the left being guarded by a line of beeches, while the boundary wall on the right is close to the tee.  A good drive should enable a three to be recorded.  A ditch, wall and several trees must be carried from the next tee, if the hole, 225 yards, is to be taken in a par 4.  The ground rises here. and the balls run very little.  Two fine swipes and an iron shot should enable the putter to be used at the third hole, which is 487 yards from the tee.  There is a sunk roadway and many players top their seconds into it and run up totals of eight and nine, instead of the regulation five.  A downhill drive and a pitch give one a look in for a three on the fourth hole, which is 240 yards in length, but a four represents steady golf.  The next (143 yards) is a perfect three, if the adjacent trees, which catch a slightly sliced tee shot, are safely negotiated.  A good drive is essential at the sixth green, which is occasionally done in three, but a four is quite satisfactory considering the fact that the line to the hole is up hill.  A topped tee stroke is badly punished going to the seventh ~ yards), while a sliced ball lands on the railway.  Bar mistakes, a four should be recorded here, but the approach must not be too strong as the green is a built-up one.  The eighth (~z yards) requires a long drive up an incline, a good brassie stroke and an iron shot, before the green is reached.  A five is par play.  The ninth is a comfortable four, the distance from the tee being 250 yards, bringing the total for the outward journey to 36.

The homeward holes are shorter, but they frequently cost more than the other nine, owing to the hazardous nature of the ground. As the fairway narrows at the tenth (281 yards) a straight drive is absolutely necessary, a pulled ball going into the tunnel, and a sliced one reaching the canal.  A convenient wall penalises a fluffed approach. The slashing driver can take the eleventh hole (359 yards) in four strokes, but a five is not to be despised.  On a moderately calm day a perfect drive should give the player a chance of a three at the next the green being 195 yards from the tee.  The hazard here is a seven-foot hedge, which catches a weak, stroke.  Three terraces form the twelfth green (270 yards ), which slopes away from the golfer and consequently calls for great accuracy with the iron.  The least bit too strong and the ball is over the putting ground.  The fourteenth (422 yards) is a long-driver’s hole, and it is important to keep the correct line from the tee.  If no mistakes are made in the long game, five strokes should fall to be added to the player’s total.  From the position of the green the fifteenth hole, although only 314 yards in length, must be considered a hard four.  The sixteenth (182 yards) is a blind hole and three represents perfect golf.  If the trees are avoided, the seventeenth (253 yards) should be negotiated in a nice four.  Then the home green; there is not a finer in the whole of Scotland.  It is raised about a yard above the surrounding ground and measures 40 yards by 20.  The grass is beautifully fine and close.  The bottom of the hole is frequently reached in two, but a three is entirely satisfactory.  A 4 inward makes the par 70, but nobody has yet succeeded in recording that total. The professional record is 71, made this season by John McAndrew, the details of whose score are;

The best amateur score is 73, compiled by Mr Hugh F Macneal and Mr A Mitchell.  The scratch total is 78. 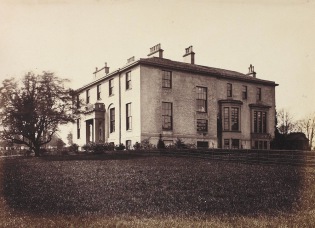 The Ruchill mansion makes a commodious clubhouse.  Although over 200 years old, the house is in excellent preservation.  There are three large public rooms and a well-appointed billiard-room, besides extensive locker accommodation, and there are also separate rooms for ladies.” (GET 10.5.1902)

The house, shown left, was demolished during or shortly after the First World War. 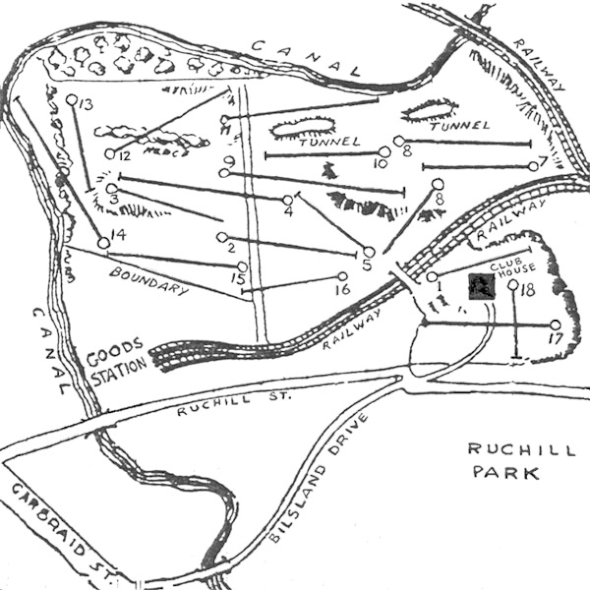 "The Town Council of Glasgow yesterday, by 55 votes to 42, decided to purchase ground on the Ruchill Estate, comprising the North Western Golf Course, for the purpose of a new housing scheme. It is probable that a portion of the ground may be reserved for a public nine-hole golf course."

In 1928 the club was dispossessed of its ground by the Greater Glasgow Housing association for housing development and the members joined with those of Bankhead GC to form Hilton Park GC.  The course was taken over by the Corporation , reduced to 9 holes, and remains open today.

Among the more unusual nomadic clubs playing over Killermont that year (1968) was the Glasgow North Western Golfing Society, who were given the courtesy of the course on Monday mornings on preferential terms.  They were restricted to the hours between 9.30am and noon, and they might not exceed twelve in number.  No doubt, too, they were restricted in expressions of disapprobation  for their occasional bad shots since their title concealed the identity of a group of clergymen.” (GGC)