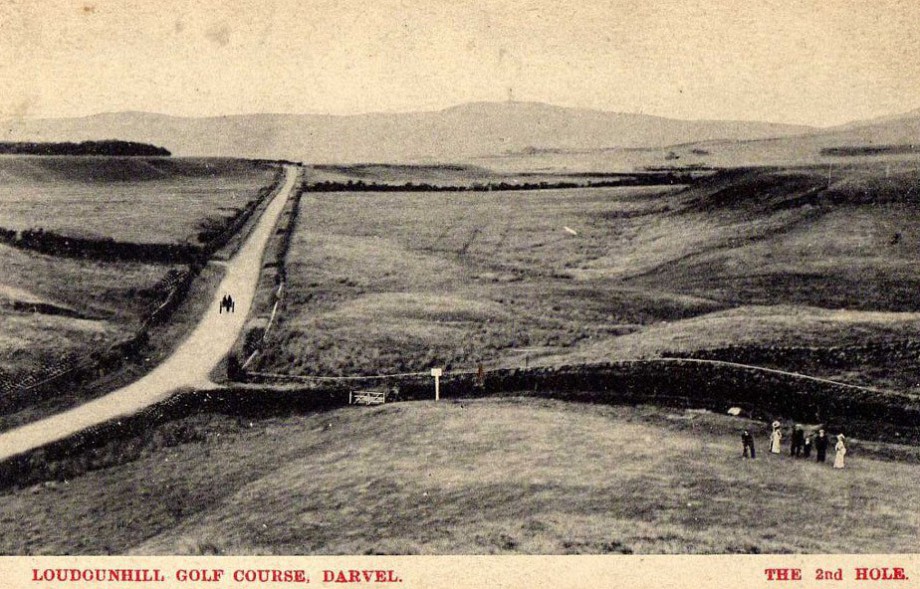 The Loudonhill Golf Club, not to be confused with Loudon Castle which was several miles away at Galston on the Loudon Castle estate.had a protracted beginning. The first meeting was held in September 1908. 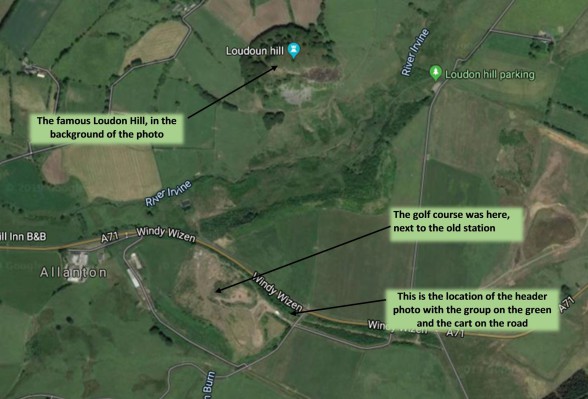 “A meeting of those favourable to the formation of a golf club and course for the district was held in the Lesser Town Hall on Tuesday evening. Mr John Morton, Glengour, presided over a good attendance, and Councillor J.M. Clelland gave an encouraging report of the movement. After the matter had been discussed in all its bearings it was agreed to put the proposal into execution, and quite a membership enrolled. There is every prospect of the undertaking being even more successful than its promoters anticipated, and parties wishing to join can have the prescribed form of membership from the officials.” (KS12.12.1908)

However, it was a year before a course was agreed upon. “The Loudounhill golf course will soon be an accomplished fact. A meeting of the members was held in the Lesser Town Hall on Monday night, when the whole of the negotiations were placed before the meeting. A draft of a nineteen years lease was submitted and the meeting agreed to confirm same. The lease will come into operation from Whitsuntide, 1910, and in the meantime terms have been come to with the tenant of the ground. A greenkeeper, Sandy Robertson, has also been appointed, and two or three weeks should see the course open for play. Arrangements are being made for a service of conveyances on stated days and at stated hours.” (IVN 27.8.1909) 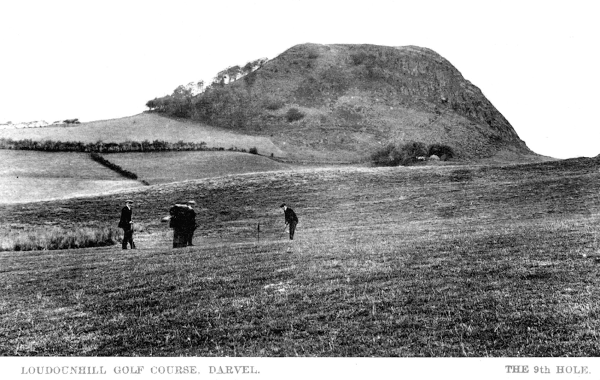 The course was finally opened in October1909. “The Loudounhill golf course was opened for play on Saturday last. There was a large turnout of members, and they were favoured with an ideal day. The Captain, Councillor J.W. Clelland, explained that after full consideration, the committee thought it inadvisable to make any official opening meantime. They had laid out the temporary teeing and putting greens to allow the members to play during the winter season, and they hoped to have permanent greens in order by the spring. The course is an ideal one, which may at first prove trying to beginners, but all lovers of golf want good natural hazards. Conveyances have been arranged for, and one can drive to the course for the humble threepence.” (ASH 1.10.1909)

“The secretary has arranged an exhibition match for Saturday first (tomorrow) which will excite considerable interest among the members. The game will start about half past two o’clock and the players will be Messrs John Shannon, R. Garson, R. McInnes, and C. Robertson. The last named, is, of course, our local player, Mr Garson is the finalist of this year’s Irish championship, and Messrs Shannon and McInnes are the pair who put up such a great fight in the “ Evening Times” competition and almost succeeded in winning the trophy. It will be interesting to see whether the Loudoun record of 72 made by Mr Shannon at the beginning of the season will resist the efforts of these four doughty players.” (IVN 15.10.1909) 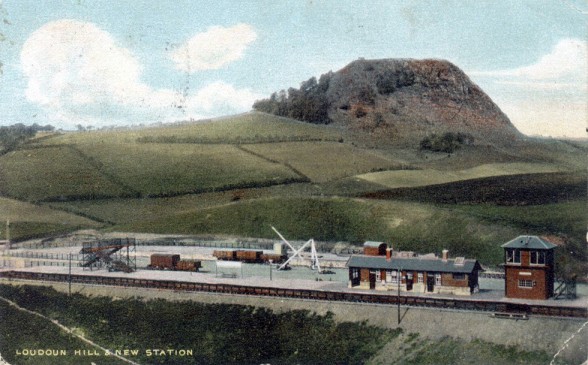 The course was immediately behind this station

“Despite the wet weather the exhibition game which we noted last week was played at Loudon on Saturday last, and although the greens were very heavy the players all had good scores. .A large number of members and friends witnessed the game. Four balls were played. Messrs John Shannon and R. McInnes, the ‘Evening Times’ finalists, opposing Messrs R. Garson of Irish repute, and Charles Robertson. Play at the start was somewhat weak, the sodden condition of the turf being largely accountable for it. Mr Garson sliced his first ball into the wood. In the three rounds which he has played over the course, he has done the same thing. At the turn Messrs Shannon and McInnes were 3 up, the scores for the best ball being 35 and 38, and at 15th hole they won by 4 up and 3 to play. Completing the round Mr Robertson won the 16th in a splendid two, the 17th was halved, and Mr Garson won the 18th in 4. The best individual scores were, Mr McInnes 73, and Mr Shannon, 74, so that the latter’s record round of 72 still stands, but there is no doubt that several strokes would have been clipped off it under more favourable conditions.”

“A start has been made at Loudon with the making of spare greens for winter play, the advantage of putting the summer greens under repair this winter will be fully appreciated by members when spring comes round. Some of the greens are in wonderful condition for a first year, and one or two which would otherwise have been excellent, have been spoiled by the sheep. Number six especially suffered and Sandy Robertson has found it necessary to undertake a big patching job. About half of the green has been finished and the patching has been so skilfully done that with a little rolling the green will soon be perfect again.

How delighted Valley players were when the evening papers of last Saturday informed them of the great achievement of veteran, David Bone, not only in carrying off the championship of Glasgow , but in completely eclipsing all the younger school, cutting two strokes off the amateur record of the course at Blackhill, and equalling the professional record of James Braid !. Many saw Mr Bone for the first time at the opening of the Loudon course and were charmed by his play. In spite of his 53 years he drove as long a ball on that day, as his youthful rivals. Since then he has been in the final of the “Evening Dispatch” trophy and the semi-final of the “ Evening Times” competition, and it is to be hoped that so good a sportsman will realise a hope that he expressed after his game at Loudon – that he would be able to keep his form till he was 60.”

“Last Saturday the final for the Adam Wood medal was played on the Loudoun Hill course, when Wm. Smith, Rosemount, ran out winner by defeating Hugh Aird, the margin in his favour being 3 up and 2 to play. A start is now being made in the Coronation competition for the gold medal presented by Mr Thos. Greenshields of Leadbetter, Dobieside.” (ASH 11.5.1911) 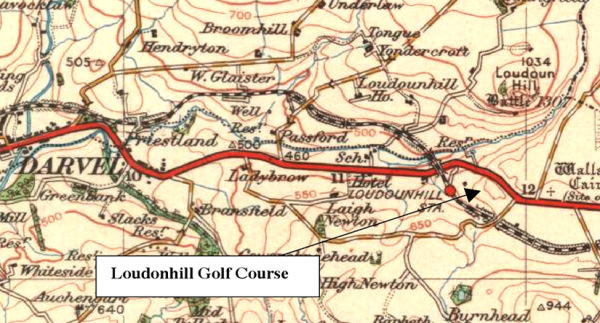 “This course of nine holes is picturesquely situated about one minute's walk from Loudonhill Station and about two miles from Darvel Station. The ground is admirably adapted for golf, and is decidedly sporting in character. The subsoil is pure sand and gravel, and the hazards are numerous and formidable.  Driving from the first tee one goes right to the top of the Beg, a hill on which Sir William Wallace fought and won one of his numerous battles.  The view from the top of the Beg is magnificent, embracing the whole Irvine Valley and the Arran Hills.Willie Fernie, who went over the course at its inception, is of the opinion that it will form one of the best inland courses in Scotland.” (GSWR)

“The golf course at Loudon Hill had only a brief existence early this century.   A ‘rugged’ course on its high wind-swept slopes it did not survive for long after the formation of the Loudon Gowf Club in 1909.  Loudon Hill Golfers could make a rare claim.  They played over the site of a Roman fort where eighteen centuries earlier soldiers had amused themselves with a game of dice or kept a look out for hostile natives.” (IVS)